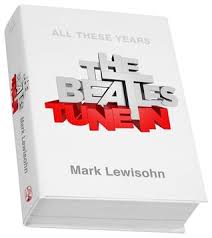 Monday evening and to Kings Place near King’s Cross Station where Mark Lewisohn, the world’s foremost Beatle historian and biographer, is in conversation with music writer and editor David Hepworth, the occasion to mark the publication last month of the softback edition of Tune In, Volume 1 of All These Years, Mark’s monumental Beatles biography, which I reviewed at length here on March 4, 2014 (http://justbackdated.blogspot.co.uk/2014/03/tune-in-overview.html). It was also no coincidence that 53 years ago on this day, October 5, ‘Love Me Do’, The Beatles’ first single, was released.
Tune In was first published in the autumn of 2013 as a de-luxe two-volume cased edition as well as an abridged single edition which, at over 960 pages, suggests a generous interpretation of the abridging process. It is, in fact, the first of three such packages, this initial one covering The Beatles’ lives up to the end of 1962 when they were on the cusp of becoming the greatest entertainment phenomenon in popular music history. Volume 2, when it arrives, will probably take in the years 1963-1966, with Volume 3 taking The Beatles from 1967 to 1974 when the partnership was formally dissolved, though I think Mark is still a bit unsure quite where Volume 2 will stop and Volume 3 begin. He’s also playing it safe on when Volume 2 will be published, suggesting 2020 as the prospective year, let alone making predictions about Volume 3, though it’s likely the gap between these two will be shorter because he’s been able to research them both together, unlike the more detached research concerning The Beatles’ childhoods and early years that was required for Volume 1. 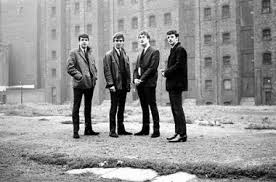 Beneath this photograph of The Beatles on the rubble of Saltney Street, taken on September 28, 1962, Mark began the evening with a reading from the book; a passage about Pat Moran, the group’s first ever fan who in 1960 defied her strict Catholic father and befriended Paul, John and George, delivering much needed food to the disgustingly filthy flat where they lived in Gambier Terrace near Liverpool Cathedral. Pat had seen them play around Liverpool and in their demeanour, their cockiness and the music they performed recognised the qualities that three years later took them to the toppermost of the poppermost, as John put it. Paul wrote to Pat, thanking her, and Mark traced her through the auction house where, in the 1990s, she sold the letters. “She really was the first fan,” said Mark, “the first of millions.”

Thereafter the evening settled into a conversation between Hepworth and Mark that centred largely on his research methods and the many strange coincidences that crop up in the Beatles’ story. As regards the former there is little doubt that Mark leaves no stone unturned in his quest for information and, occasionally, comes upon a goldmine, such as happened when he traced Brian Epstein’s Liverpool solicitor who had a huge box of hitherto unseen correspondence between them. Mark’s major regret, of course, has been the sad death of Neil Aspinall, the group’s original roadie, eventual manager and closest advisor for five decades. Aspinall, who never gave an interview while in the Beatles’ employ, was prepared to reveal all to Mark and had begun to do so shortly before he passed on. One issue that Aspinall impressed upon Mark was that the order in which the names of the four Beatles are traditionally rendered – John, Paul, George & Ringo – came about because of the order in which they joined the group, John inviting Paul to join, Paul suggesting George and George favouring Ringo. Another was how the need to keep evolving kept them together, even before they made their first record. “They never wanted to do the same thing twice,” said Mark. “If that was happening then they’d have split up at any time.”
As regards the coincidences, those who’ve read Tune In will be familiar with the almost supernatural twists of fate that litter their career. Among a few that Mark spoke of was the occasion in late 1962 when Paul hitched to London with his girlfriend and, having spent an evening at Peter Cook’s Establishment Club, crashed out on the floor of a flat now occupied by their Liverpool friend Ivan Vaughan. Aware that this was the weekend when Paul began writing ‘I Saw Her Standing There’, Mark was determined to find out precisely where this flat was. This wasn’t easy but when he did – through an Electoral Roll – he discovered, bizarrely, that it was in the same block of flats in Great Portland Street where George Martin had received oboe lessons from Margaret Asher 15 years earlier. She and Dr Richard Asher raised their family there before moving to nearby Wimpole Street where Paul, of course, resided for two years after their daughter Jane became his girlfriend in 1963.
After answering a few questions from the audience Mark finished the evening with another reading, this one from the closing passage in Tune In. Somehow or other the stars were aligned for The Beatles as 1962 drew to a close. “We were the best fucking group in the goddamned world,” said John later. “And believing that is what made us what were … We thought we were the best in Hamburg and Liverpool, and it was just a matter of time before everyone else caught on.”
Posted by Chris Charlesworth

So when are you writing the equivalent sized tome on The Who?

I'm hoping Mark Lewisohn will finish this project in his lifetime, much less mine.

Great book , which I read quickly despite its size and large amount of info. Think the wait for the follow up will be long long long . Shame .