Here’s one from the archives, recalled as I was editing the Jimmy Page book referred to in my last post. Page, of course, played a fine guitar line on Donovan’s 1966 hit ‘Sunshine Superman’ which he reprised on stage with Donovan at the Royal Albert Hall in 2011.
Here I am writing about Donovan 39 years and a bit ago, published in Melody Maker in August 1976. The one thing I recall about Donovan's stay in New York that week was that he was being managed by an old friend of mine, Terry Doran, who used to work for Apple and look after the Beatles’ cars. For reasons associated with carnal lust Terry requested the loan of my flat for a couple of hours for an assignation with the girlfriend of a very successful rock star, to which I acquiesced, but being as how it was hush-hush then I’ll say no more now. 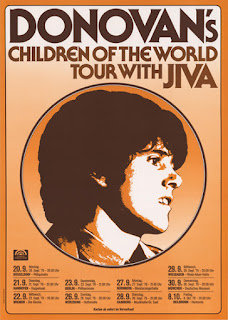 Did you know that you can create short links with LinkShrink and receive cash for every click on your shortened links.

I was the lead singer of Jiva and on that tour we open the show and was his backup and with a guy name Dwayne Ford who shored up the keyboard work...