IT’S ONLY A NORTHERN SONG

So Sony now owns ATV Music which in turn owns Northern Songs, the company formed in 1963 to administer and benefit from the Lennon-McCartney songwriting catalogue. Its original owners were music publisher Dick James, Beatles manager Brian Epstein and songwriting Beatles John and Paul. If the reports in today’s newspapers are true, Sony has bought from the Michael Jackson Estate the 50% of ATV Music it didn’t already own for $750 million, meaning that its total value is $1.5 billion. Granted there’s more to it than just The Beatles’ songs but they are the jewel in its crown so it’s not a bad result for a couple of Liverpool teenagers who, in their own words, “sagged off” from school so they could spend their afternoons writing songs together at Paul’s Forthlin Road house back in 1958. “Another Lennon-McCartney Original” they would scrawl above the words to songs like ‘Too Bad About Sorrows’ and ‘Because I Know You Love Me So’*, neither of which they completed, let alone played or recorded with The Beatles. 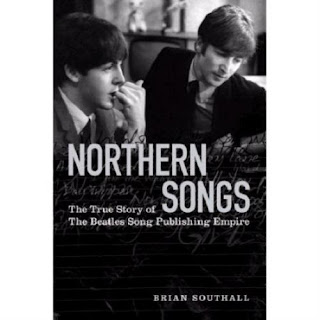 The story of how the “Lennon-McCartney Originals” changed hands many times and ended up being worth well over a billion dollars and owned by a Japanese electronics conglomerate is long and convoluted. Many years ago I commissioned an entire book on the subject – its cover is above – but in a nutshell Dick James got cold feet when John ran off with Yoko and sold his 50% to Lou Grade, the owner of ATV which in those days was a television company. Clive Epstein, who had inherited 10% from his brother Brian, sold out to Grade too, and John and Paul were persuaded by Allen Klein to pledge their 20% each to a bank in a deal to acquire Northern Songs that went sour, thus enabling Grade to snap up their share as well. Grade subsequently sold out to an Australian entrepreneur who, when his business went pear-shaped in 1985, sold out to Michael Jackson who was looking for somewhere to park the massive royalties he’s earned from Thriller.
The sale price then was $47.5 million, a tiny fraction of what it is worth today and a sum that Paul could have raised had he felt so inclined, especially if Yoko chipped in. Paul, miffed that he would have to stump up such a tidy sum for what he felt was rightly his in the first place, didn’t feel inclined and relations between him and Jackson thereafter went into terminal decline. When Jackson’s spending habits got out of hand in the early 2000s he sold half to Sony for around $100 million and now Sony has bought the other half for seven and half times that, meaning Jackson’s three children are what Jane Austin might have called “eligible”, to say the least, though, according to reports, under Michael’s will they have to wait until they are 30 to get their hands on the dosh.
All of which makes me rather sad, and I’m sure that Paul McCartney – wherever he happens to be today – will be feeling the same as he scans the newspapers over his boiled egg, toast and coffee. Of course he’s massively wealthy anyway, probably the richest rock musician in the world, and he’s recently announced a series of tour dates for 2016 at which he will no doubt sing many of those “Lennon-McCartney Originals” to massive acclaim yet again.
But the fact that the legacy of The Beatles – their songs – is owned not by Paul and Yoko is a triumph for unrestricted capitalism and a tragedy for those who create music, whether it be as magnificent as that of The Beatles or simply any mediocre songwriter who’s been obliged to sell the rights to his work to eat. It is also a depressing echo of how so much else of cultural merit that this country has produced is owned not by those who created it but by sharp businessmen wherever they may lurk.
Lennon & McCartney gave us magic. Businessmen only give us their funny paper.

*I am indebted to Mark Lewisohn’s wonderful Beatles biography Tune In for the titles of these two phantom Lennon & McCartney originals (very rough versions of which finally saw the light of day on the ‘Fly On The Wall’ bonus disc that accompanied Let It Be Naked.)

Why did Dick James sell to Lew Grade but not offer it to McCartney or any of the other Beatles for that matter? I'm sure McCartney, Harrison, and Starr were rich enough to afford it.

The Beatles and Dick James had grown increasingly apart, especially after Epstein died. It was a generation thing, he the traditional showbiz music man, they the revolutionary heroes of the alternative culture. Lew Grade was more his type!

Discover How You Can Master Your Habits And Reprogram The Subconscious Mind To Get Any Result You Want In Your Personal Development and Fulfillment!

Start following our trades today and gain up to 270% per day.