THE WHO – Badges & Passes

In that green folder of Who memorabilia was a plastic bag containing lots of buttons and badges and – miraculously – the backstage pass for The Who’s concert at London’s Oval Cricket Ground on September 18, 1971. Signed by promoter Rikki Farr, it’s a bit ‘distressed’ as auction houses describe items that have seen better days, but considering it’s really no more than a flimsy piece of paper it’s done very well to have survived at all. I doubt there’s many more of these in the world. (There's a post about this show elsewhere on the blog.) 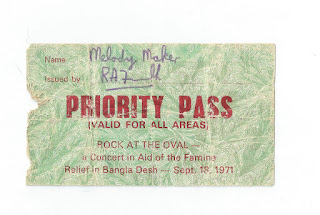 Up to this point I don’t think I was ever given a backstage pass for any Who shows even though I definitely was backstage on many occasions. Security didn’t seem to exist in those days which wasn’t to say that anyone could wander into their dressing room, you just needed to look like you belonged and in you went. It helped if a few people in the entourage recognised your face, of course, which they did after I’d been on Melody Maker for about six months.
In the days before laminated backstage passes acts on the road issued either stick-on passes, sometimes with your name written on, which you peeled off from backing paper and stuck to your clothes, or buttons like this one below that tour manager Pete Rudge gave me when I went down the East Coast of America with The Who in November of 1971. This was the first time I’d ever visited America – and what better way to go than with The Who touring party. 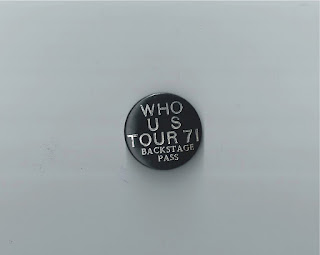 By the time of the Quadrophenia tour in 1973 they’d moved on to laminates but I seem to have lost my yellow plastic pass with the nuclear warning icon that they used on that tour. I remember having one for the two shows at the LA Forum in November 1973. Nevertheless, along the way I’d picked up these buttons, the ones with the concentric circles – pin-on and sew-on – from around the time of Who’s Next, with the Meaty Beaty Big And Bouncy, Odds And Sods and Who By Numbers ones a bit later. Towser Tunes is a bit of a mystery. I think it was a music publishing company that Pete launched in the seventies but why he had buttons made for it is anybody’s guess. The four Who heads are from Madison Square Garden, June 1974, one for each night, and they were the same ones scanned by Richard Evans for use in the booklet accompanying 30 Years of Maximum R&B. 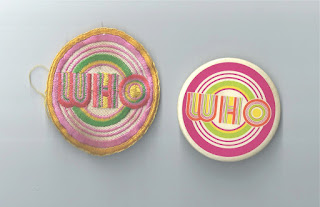 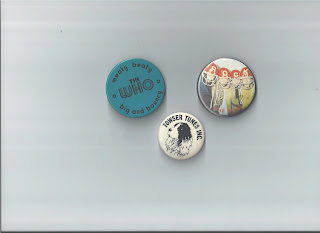 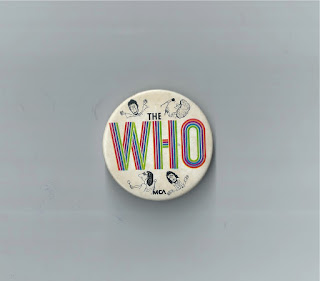 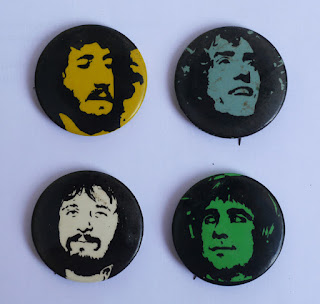 When The Who opened the Rainbow Theatre in London with three straight nights at the beginning of November 1971 its manager John Morris gave me this Rainbow pass which enabled to walk in free to every show there, backstage too. Who aside, this was the bet pass I ever had, and John, an American, became a good friend of mine while he lived in London and ran the Rainbow. 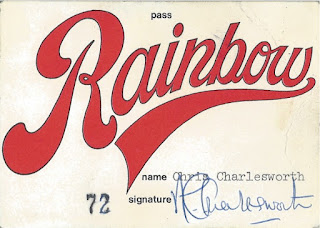