TEENAGE KICKS, MY LIFE AS AN UNDERTONE – By Michael Bradley 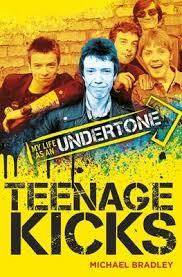 This is an extract from the newly published autobiography by Michael Bradley, the bass player in The Undertones who joined his school friends in the group in 1974. Four year later they recorded ‘Teenage Kicks’ which famously became John Peel’s favourite song ever, just as The Undertones became one of the most fondly remembered groups on the post-punk era.
Michael’s story is a bitter sweet, heartwarming and occasionally hilarious tale of unlikely success, petty feuding and playful mischief during five years of growing up in the music industry.
We join Michael and his friends on the night in 1974 when John Peel played ‘Teenage Kicks’ for the first time on his radio show. Their world would never be the same.

If you're looking for a reputable contextual advertising network, I recommend you check out Chitika.

Enjoyed that :-)i couldnt begin to imagine how many times ive gigged Teenage Kicks,but i know it will be many more!

Enjoyed that :-)i couldnt begin to imagine how many times ive gigged Teenage Kicks,but i know it will be many more!

Anyone else wants a FREE MC DONALD'S GIFTCARD?

Follow our signals today and gain up to 270% per day.