WHO’S LAST – The Alternative That Got Away

Most of the material in the green folder of Who material I'm scanning consists of press cuttings and magazines, and a few first drafts of text for the two books with scribbled notes in the margin. There were no computers in 1981 so everyone wrote on typewriters which meant that if you made a mistake you had to start again or use Tippex to plop a splodge of white stuff on to the paper, then type over it.
I had completely forgotten that in 1983 Polydor, The Who’s record label, commissioned me to write sleeve notes for a double live (vinyl) album they were planning which would be called Who’s Last, so it was a bit of a surprise to come across my six pages of A4 typed notes for this. If you can read it, here’s the first page: 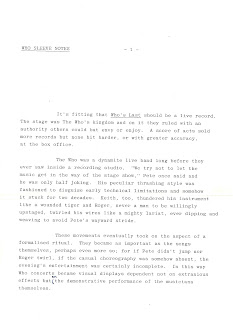 The last few words on the final (sixth) page were: ‘The Who is dead. Long Live The Who’.
Polydor had sent me the track listing and the record looked interesting: side one recorded at Charlton (May 18, 1974) and Swansea (June 12, 1976) football grounds; sides two and three recorded at the Philadelphia Spectrum (December 10 & 11, 1979); and side four from various shows recorded during what was grimly announced as The Who’s final ever tour of the US during November and December, 1982. (Many of the tracks would subsequently turn up on 30 Years of Maximum R&B or as bonus tracks on reissued Who CDs during the nineties.)
Side four closed with ‘Twist And Shout’ (probably from Toronto, December 17, 1982), sung by John, and I remember calling him up to ask for a quote: “In the days of The Detours I used to sing ‘I Saw Her Standing There’ and ‘Twist And Shout’ because Roger couldn’t sing them, couldn’t get up there. We started getting five requests a night to do ‘Twist And Shout’ and I used to end up going to the tax office in the morning with no voice at all.”
In the event, of course, this album was never released, although an entirely different album called Who’s Last was released the following year. I cannot remember why the first Who’s Last was cancelled or even whether I was paid for writing the notes, but I was less than delighted with the Who’s Last that eventually came out and vented my spleen in my 1995 (revised in 2004) book The Complete Guide To the Music of The Who. Here’s what I wrote: 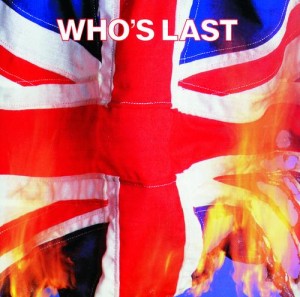 It’s a crying shame that The Who waited until 1984 to release a full-blown double LP designed to represent an entire concert. By this time they’d given up touring completely and this came out almost as an afterthought, although at one time there were plans, regrettably abandoned, to include retrospective material from the early Seventies.
This release is a reasonably accurate reflection of the way the band sounded on the 1982 US tour, and by any standards apart from their own, they didn’t sound bad at all. They’d become what Roger and John always wanted: a streamlined, professional, major league rock attraction, capable of selling out vast arenas to fans who wanted to hear a diet of classic songs from The Who’s splendid back catalogue. Roger and John (and Kenney Jones) were happy to oblige; Pete wasn’t but he went along anyway, knowing that he had nothing left creatively to offer The Who.
Most of the young crowds who came to see The Who in 1982 hadn’t seen them before and knew nothing of the glorious spark that illuminated them in days gone by. The fans sang along to ‘See Me, Feel Me’, punched the air to ‘Won’t Get Fooled Again’ and played air guitars to ‘My Generation’, and then went home happy, well satisfied with what The Who had given them. The Who got well paid (at last!), so why should anyone complain?
Well, for starters it was a shoddy state of affairs that any live material from this era – recorded when the band was coasting – should find its way on to the market legitimately, while there was very little live material available – Leeds excepted – from the era when The Who genuinely reigned as the world’s greatest live rock band. Secondly, Who’s Last was heard by younger critics of the band – not to mention younger potential fans with perceptive ears – who inevitably turned around and quite rightly questioned if there was anything special that set The Who above and apart from other bands (as one critic put it, “wished they’d died before they got old”). Thirdly, most of these tracks were taken from the Toronto show that had been released on video the previous year (as The Who Rocks America), so hardcore fans already had this material. Older fans with treasured memories just shook their heads in resignation. Even the packaging – a dodgy ‘Union Jack burning’ cover in the UK and dull black and gold effort in the US – was rank. What had happened to quality control? Why would The Who willingly allow their reputation to be trashed in this way? Didn’t they care any more? Who knows (or cared)?
Keith Moon would have rolled over in his grave if he’d heard it. It’s to be hoped he didn’t.

Not really suitable for sleeve notes!

Most of Who's Last comes from the Dec. 14th show in Cleveland, with a few tracks from Oct. 20th in Seattle. Not that it matters much, as it's a shoddy release 'irregardless'. Oddly the Philly '79 tracks still remain largely unreleased.

Do you know exactly which tracks come from which show? It always made me wonder.

Almost every track is from Cleveland. However, the two best songs on this terrible record are from Seattle: Magic Bus and Summertime Blues. Those two songs are at least somewhat inspired.

Thanks for this. I had always assumed they were from Toronto.

Thanks a lot, Ed. Pete can be heard saying somwhere between the songs that it was the last US concert, which was Cleveland. And Toronto sounded a bit different, but there were "myths" about songs from Toronto and maybe some other shows being involved. So now it's clear.

It kept bugging me, it really did. Wikipedia did not help, of course, although it states the essential fact which Ed posted above - Most of the 2nd concert from Cleveland (14th Dec) plus two tracks from Seattle. But what about Sunbstitute? It was not played on either date. So I decided to run the whole tracklist through meticulous comparison with audience recordings, soundboards and videos. Mystery solved! Two tracks come from different sources: Substitute from San Diego 27.X. and Behind Blue Eyes from East Rutherford 10.X.

And one more for you, Chris: Twist And Shout that you selected for the 30 YRS box set does not come from John's birthday gig in Toronto (it actually was not even played on that date), but from the penultimate Toronto gig (16.XII.). Wikipedia says it is from the 2nd Shea stadium show, but I compared it, and no way. Comparison with the video, sbd and audicence sources proved it really stems from the "dress rehearsal" for the farewell concert.

So I corrected the Wikipedia entries.

Watch this now or stop placing bets on sports...