THE WHO – Focusing On Nowhere, Investigating Miles 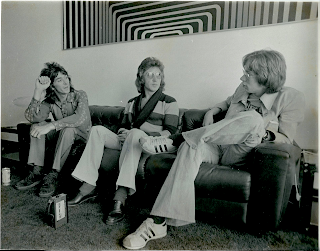 This photograph of yours truly with Ian McLagan and Kenney Jones, taken is Los Angeles in 1973, appeared on my Facebook page last weekend and came from a bulging green envelope folder that was named ‘Who Bio Etc’ that I found at the bottom of a pile of old Q magazines underneath our staircase. It also contained piles of Who documents that date from 1981 when I was researching my book The Who: The Illustrated Biography, published by Omnibus Press in 1982, and my book on Pete Townshend that came out a couple of years later. In view of the high standard of many subsequent Who-related books, both seem rather slight nowadays but at the time I was quite proud of them.
So I scanned some of the documents in the folder to post on Just Backdated with a few notes about each item.
When I wrote those books I asked Pete for his help. It was, of course, during the period when he ran his own book publishing company, Eel Pie Books, so the request was a bit of a long shot as I was writing for a rival company. Nevertheless Pete took the trouble to reply, gracefully, as the letter below indicates, and even cc’d the letter to his mum and dad in case I went snooping around their house in Ealing. Heaven forbid! Nevertheless, I’m pretty sure nine out of ten rock stars would have thrown my letter in the bin. 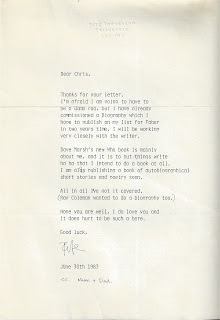 Denied access to the source I did what all researchers do and went to the Public Records office, in those days at Somerset House at Aldwych where records of British births, marriages and death are kept. Over the course of several days I painstakingly looked up such documents as I could find that related to the Townshend family. I found Pete’s birth certificate, his mum and dad’s wedding certificate and the wedding certificates of both of his grandfathers, Horace Townshend and Maurice Dennis, respectively a fishmonger and a ‘tailor’s butter’, whatever that is. Happily all of these documents were in my Who folder and they are below. 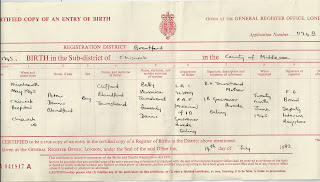 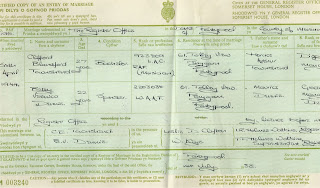 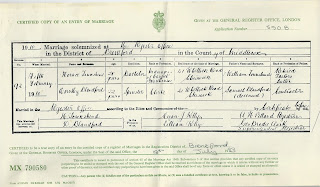 All the information I gleaned from these documents enabled me to flesh out the opening chapter in my biography of Pete. There was no internet in those days but I somehow discovered that Horace Townshend, whom Pete refers to as Horry in his book Who I Am, was a semi-pro musician and composer who with his wife Dorothy (Dot) performed at music halls and at seaside parks in the 1920s, sometimes with the Jack Shepherd Concert Party. A bit of asking around led me to an expert on Music Hall, a very old bloke who lived in a small flat in Bayswater that was chock full of Music Hall memorabilia, and in a book he showed me there was a picture of the Jack Shepherd Concert Party on stage in Brighton. Unfortunately he was reluctant to lend me the book so I couldn’t include the picture in my own book, not that I knew for sure that Horry and Dot were in the picture anyway. But – surprise, surprise – it’s on the internet now, and I’ve reproduced it below. My Music Hall expert did vaguely recall Pete’s paternal grandparents when I mentioned their names and they might just might be on this stage. Even if they aren’t this is the sort of event that Pete’s granddad and granny would have appeared at – a bit different from smashing guitars at the Marquee Club I know, but everything starts somewhere. 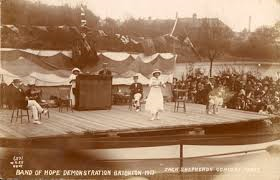 Wow. Pete Townshend's parents literally lived two houses up from me when they got married. Mind completely blown. Been a Who fan all my life and now found this gem! Thank you so much, as always, Mr Charlesworth!