Aside from my postcard from John, my stash of Beatles memorabilia is memorably slight and most of it was picked up on a whim in 1975 from a shop in Greenwich Village for $20. I wasn’t sure what motivated me to invest in two pairs of Beatles ladies’ stockings (still unworn, incidentally), two Beatles wigs (also unworn), a scrapbook of at least 100 bubble gum cards (mostly Dezo Hoffman pix from ‘63/4), an orange plastic guitar (smashed by my kids), a yellow submarine (intact, just) and a few other odds and ends (badges, hair clip, tour programme, plate etc), but they have followed me around for years now and to my immense disappointment are, with the possible exception of the stockings and wigs, virtually worthless. 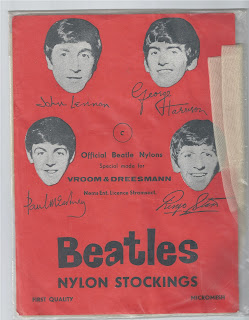 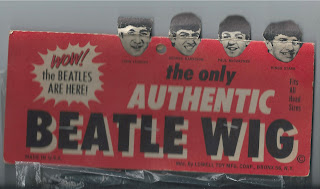 Now reduced to one, above. Back in the eighties I gave one of each to a rock-mad pal as a wedding present and he was delighted. His bride, however, was not, no doubt preferring a pop-up toaster or six wine glasses. The marriage didn’t last, and the groom tells me he hung on to the stockings and wig but was unconcerned about retaining any glassware or kitchen appliances.


The disappointing valuation of my little collection is the viewpoint of Pete Nash, editor of The British Beatles Fan Club magazine, to which I am an occasional contributor. Unlike mine, Pete’s stash of Beatles memorabilia is memorably gigantic and a good deal of it, some 2,500 items, went on sale this week. Not to put too fine a point on it, this may well be the most valuable Beatles’ collection to hit the market this century, containing as it does some of the rarest and most sought after items that interest Beatle collectors.
Top the list is a one-sided test pressing of The Beatles’ second album With The Beatles, an unassuming relic to be sure, especially as its label (pictured below) does not offer any information as to what the grooves contain. This is priced at an eye-watering £5,500. 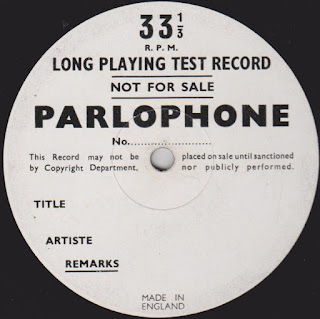 Most of the items that follow, at least those that need a buyer with a fairly deep pocket, are test-pressings, promo discs and interview recordings distributed only to radio stations. I was particularly intrigued by a 10-inch shellac record of ‘I’ll Cry Instead’ b/w ‘Tell Me Why’ which was released on a red Parlophone label in India in September 1964, priced at £3,500 which, if it were being sold by an original purchaser in its country of origin, might feed its owner’s family for a decade. Two other Indian singles (‘Hard Day’s Night’ and ‘Can’t Buy Me Love’) in a similar format are a bit cheaper, probably because – unlike ‘I’ll Cry Instead’ – these songs were released as singles everywhere else. 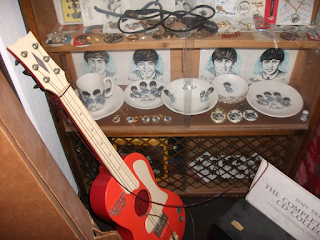 A small selection of Pete's collection. I have a plate similar to those on the right and the orange guitar looks suspiciously like the one my kids destroyed.

Only 14 of the 2,500 items are priced in the four figure range, with the vast majority, ie over 2,000, at less than £100, and most of those less than £50. About 300 cost less than a fiver. Bottom of the list is a bog-standard 7-inch of ‘I Feel Fine’ at a very reasonable 49p which, taking inflation into account, is probably cheaper than when it was released in 1964. I bought it then, for six old shillings and three old pence, but I must have lost it along the way, though I do still have four of my Beatles singles, all bought when they were released: ‘She Loves You’, ‘I Want To Hold Your Hand’, ‘Can’t Buy Me Love’ and ‘Day Tripper’. Since all four are irredeemably scratched due to excessive use on purchase, I estimate their value at 10p each tops, and even my Twist And Shout EP, again much played, is probably worth less than a tin of dog food.
Long before the internet and e-Bay the best place to acquire Beatles memorabilia outside of specialist record shops was at fan festivals, the first of which – called Beatlefest – was held at the Commodore Hotel in New York City in September 1974. I went along to see what was happening and whilst there bumped into May Pang, with whom John was living during his sabbatical from Yoko. I’d met May once or twice before and she told me that John had sent her along with a wad of cash to pick up stuff for him from the traders in bootlegs and other Beatle bric-a-brac. May confessed that she didn’t really know what to buy for John and asked me for advice, so I chose half a dozen bootlegs that I thought he might like, and drew her attention to a picture of him in Hamburg, standing in a doorway and dressed in a leather jacket, taken in 1961 by Jurgen Wollmer. That picture, of course, ended up on the cover of John’s Rock’n’Roll LP, released the following year, and I have good reason to believe that my intervention played a role in this. 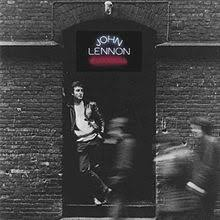