BOB DYLAN – Rolling Thunder, It Was 42 Years Ago Today

In an era when tickets for concerts by major rock stars go on sale anything up to nine months before the show, it beggars belief that on Thursday, 6 November 1975, two hours before it commenced, I bought two tickets at face value ($7.50) for a 5pm Bob Dylan show from the box office at the 10,000-seat Civic Centre in Springfield, Massachusetts, and two tickets from a tout outside for an 8pm show for $10 each, opting to pay the extra $2.50 in order to get seats closer to the stage.

Dylan was leading his Rolling Thunder Revue on the fifth stop on the tour, the dates of which were advertised only locally and not in advance. One ticket at Springfield – which was actually the tour’s biggest venue – was for myself, the other for my friend the photographer Bob Gruen who’d driven north with me for four hours from New York. Before both shows Bob stripped down to his briefs in my rented car and taped his camera equipment to himself, then dressed again in loose fitting dungarees and a sweater so the bulges wouldn’t show. Photographers weren’t allowed in but this was never going to stop Bob who, once inside, went to the bathroom and retrieved his camera, lenses and film. He disappeared once the shows started, edging his way towards the front, and six of his pictures accompanied my lengthy report on the shows, stretched across three pages of Melody Maker of November 15, 1975. 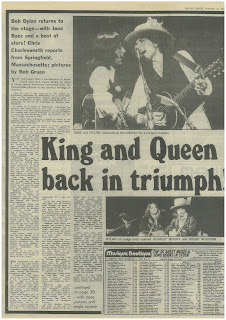 During the break between the first and second shows we went to a nearby diner which was packed full of Dylan fans and in there met Larry Sloman, a writer from New York, who ended up writing a book about the tour. He was following the tour everywhere it went and, because Bob knew him, I was able to pick Larry’s brain about it all. Some of the tour’s road crew were in there grabbing a bite too, and I remember chatting with them as well.
“You need more than a weatherman to know which way Bob Dylan blows,” was my opening line in a review that, sentence for sentence, was the longest show review I ever wrote for MM. The concerts were, after all, ‘revues’ in the accepted sense of the term which meant everyone got a go, and the bill also featured Joan Baez, Roger McGuinn, Mick Ronson, Ramblin’ Jack Elliott, Arlo Gurthrie and others, all of whom played at least one song of their own alongside the band that accompanied Dylan who, naturally enough, grabbed the lion’s share of stage time, both solo and in combinations with the others.
He was magnificent too, playing and singing not to make money or even to promote a new record but simply because he wanted to. After the hullabaloo surrounding the previous year’s tour with The Band, which was Big Corporate Rock, Dylan had opted for something completely different, a folksy down-home feel, almost like a Hootenanny, and he was happy to chime along with everyone else though there was no doubt who was the star of the show. Some of the songs he sang would appear on Desire, not yet released, and I was spellbound by ‘Sarah’, his homage to his former wife. The shows ended with the ensemble gathered round several microphones for ‘This Land Is Your Land’, Woody Guthrie’s alternative American National Anthem, a fitting finale to an evening of music in which Dylan explored his roots, mused on his past and offered a glimpse into the future.
The tour wound up at Madison Square Garden on December 8, a benefit show for Rubin ‘Hurricane’ Carter, a boxer wrongly imprisoned on a murder charge who was eventually freed. Dylan had recorded a single protesting Carter’s innocence, and I was at this show too, way up in the seats behind the stage, but it wasn’t anywhere near as enjoyable as the smaller shows in New England. The ‘review’ format didn’t suit a big arena and the audience was unsympathetic to the other musicians. Nevertheless, the two Rolling Thunder shows at Springfield remain two of the best concerts I ever saw during my three-year stint as MM’s man in America.
Posted by Chris Charlesworth

RE the first part of this post: People never believe me when I say how easy it was in the early 70s to go see McCartney, Elton John, Bowie, Lou Reed, Roxy Music, the Stones, the Who, I could go on, and this at a time when they were all at a peak in their careers.