JIM LEA – For One Night Only 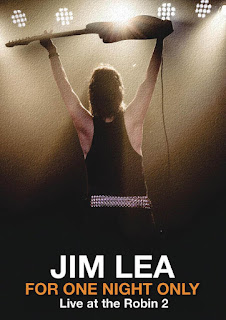 When Jim Lea re-released his Therapy album last year the package included a bonus CD, a live recording from the one and only solo gig Jim has ever performed, at the Robin 2 R’n’B Club in Bilston in November 2002. It was a charity event held in honour of Jim’s late father and Jim fronted a trio, playing guitar and singing 16 songs, mostly cover versions, backed up by his friends David Birch on bass and Michael Tongue on drums, in a group he christened Jim Jam.

Within the Slade fan community the gig has become legendary, not just because it was a one-off but for the standard of musicianship which was extraordinary. This month it is finally released on a DVD that features 11 of those 16 songs, plus a bonus track, a reworking of Slade’s biggest hit re-titled ‘Merry Christmas To The Robin 2’.
Playing a customised black Stratocaster through a muscular Marshall stack, Jim rocks out with seismic potency, clearly enjoying himself as he displays a fluent, Townshend/Hendrix-like ability to mix lead and rhythm guitar that often suggests he was wasted playing bass in Slade. His vocals might not have the clout of Noddy Holder but he sings well, gamely shouldering the lion’s share of the workload and taking time out to talk to the pumped-up crowd between songs. “Imagine,” he says, tongue firmly in cheek, before opening up with ‘Shakin’ All Over’, “imagine you’re at the gig of Slade III.” 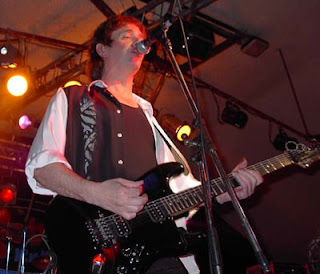 And off he goes, working his way through ‘I Saw Her Standing There’, ‘Hey Joe’, ‘I Am The Walrus’, ‘Cum On Feel The Noize’, ‘Great Big Family’ (from Therapy), ‘You Really Got Me’, ‘Far Far Away’, ‘Pretty Vacant’, ‘Go Out In Style’ (another Therapy track), and ‘Substitute’, all dashed off with the rough and ready passion of an enthusiastic garage band. Jim treats his guitar fairly callously, chucking it around and drawing feedback and sustain as he solos around chords, neglecting precision in favour of brute force and a generous dollop of showmanship. He makes it look easy but it takes great skill to play with such casual panache yet always hit the right note at the right time.
The video itself is not up to professional standard, and appears to have been filmed with a single camera which zooms in and out of the stage and from time to time veers a bit off focus, and the lighting occasionally casts a disturbing orange glow on the star of the show. In contrast there are between-song interludes in which Jim is recorded elsewhere talking about his choice of material. “I always wanted to play with Jimi Hendrix but he died on me,” he says before ‘Hey Joe’. “I thought that with Chas [Chander] managing us, that… I was going to get to play with him. [Jimi] rang up Chas [presumably in 1970] and asked him to manage him again and Chas asked us if we’d be upset if he managed Jimi as well. What he didn’t know during that conversation was that Jimi was already dead.”
‘Hey Joe’, like everything else, is approached with maximum swagger, Hendrix-style, as is ‘I Am The Walrus’ which opens with Jim playing the guitar above his head, left-hand only, before he grabs a megaphone to subvert the vocals. Unlike the record, ‘Cum On Feel The Noize’ begins at a leisurely pace, a slow singalong until Jim puts his foot down and the familiar chorus kicks in after a couple of minutes, while the only other Slade song in the set, ‘Far Far Away’, is given a more respectful, melodic treatment. On record the two Therapy songs that Jim played sound like his own work but on stage remarkably like Slade songs, this probably due to their wall-of-sound choruses and the reckless pace of the gig, and Jim makes ‘Pretty Vacant’ sound like a Slade song too, or it would if Noddy was on vocals. As it is Jim adopts the confrontationally yobbish Johnny Rotten singing style, but either way it goes to show that the Sex Pistols and their fellow punks owed a debt to Slade even if they were unwilling to acknowledge it. The final song, ‘Substitute’, sounds like The Who with a different vocalist, sharp, crisp and lively, as good a cover version of the song that gave my blog its name as I’ve heard anywhere.
The only question remaining is why Jim, a good friend of mine of long standing now, limited himself to just this one gig. It’s a question he asks himself in the accompanying interview footage, and he doesn’t really answer it, though he does say that the power he felt on stage was greater than at any time when he was on stage with Slade. Jim, always the Slade man with the lowest profile, has deliberately avoided the limelight since the group broke up and seems happy to slink off into his studio to make music primarily for his own amusement and satisfaction. In the celebrity obsessed 21st century that we live in today this is an admirable approach to life, but it seems strangely perverse when he can light up a room as well as he does on this DVD. “The people that matter know [what I can do],” he told me when we discussed Therapy last year. “That’s all I care about.”
Posted by Chris Charlesworth

Excellent live performance, Jim shows, needless to say, a perfect understanding of the rock and roll phrasing, he s got a pedigree eheheheheheheheheh

Chris - Photo credit for the live shot used in your blog: Ian Edmundson - curator at www.slayed.co.uk