Tonight sees the official launch of Richard Macphail’s memoir My Book Of Genesis at an independent book shop in West London. I am credited as a ‘with’ on the cover, an entitlement that results from my having spent hours interviewing Richard last year, then setting it all down on a computer for him to browse through, re-arrange and agonise over the naughty bits.
Richard was a school friend, aide-de-camp and tour manager of Genesis in their formative years. He bowed out in early 1977 and after a period of ruminating on the meaning of life received a call from Peter Gabriel who was in need of a support mechanism to get him back on the road as a solo artist. “In many ways the job of tour managing Peter ought to have been easier after all my experience with Genesis but the truth is Peter became more and more demanding as time went on,” writes Richard. “It’s important also to realise that Peter was on his own now. Whereas before he was one of five, with responsibilities split amongst them all, the buck now stopped at him, and this certainly made him become more and more exacting.”
In this second extract from the book we are on the road with Peter Gabriel in the spring of 1978, his second tour as a solo artist, and Richard is in charge of a show that features a level on inventiveness on Peter’s part that sometimes places unusually comic demands on his long-suffering tour manager. 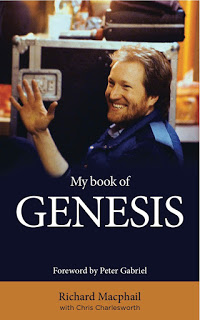 ‘Big One’ featured a long blues guitar solo in the middle, after the second verse, at which point Peter would come off stage, disappear for a few minutes and reappear somewhere in the theatre, usually on the balcony. He and I had prearranged this whole stunt: I’d meet him in the wings, we’d go out of the stage door, walk up the side of the theatre, re-enter at the front where a guy who worked for the promoter would be ready with the doors to let us in, and then Peter would go up the stairs to the balcony, the verse would start again and off he’d go, singing into a radio mike. The spotlights would be on him, somewhere in the audience, and they loved it, absolutely went bonkers some nights.
It was all Peter’s idea of course. He always was very imaginative in this way, always looking to be different, to do something dramatic that audiences wouldn’t expect. By now he’d graduated from the grey track suit into a pair of leather trousers and one of those white judo tops, so he stood out under the spotlight. So he’d be up there, and the audience is all of a flutter, and before they’d quite realised what was going on, we’d scooted off back downstairs where the spots would be on him again, and he’d walk down the aisle, still singing, and the closer we got to the stage the greater the rough and tumble as fans got out of their seats to touch him. I was right next to him throughout all this, and we’d usually get a couple of the promoter’s guys and a couple of guys from our crew who’d make their way towards us, so there’d be four or five of us around him to protect him. No one would want to hurt him, they were only people getting a bit over enthusiastic, but the judo shirt was usually ripped open before we could hoist him up on to the stage to a huge cheer, and then we’d disappear. It was a great stunt and although a few others tried something similar, Peter was definitely the first to do it like that.
I always thought it was especially brave of Peter considering that all those years ago at Aylesbury he made the mistake of jumping feet first into a crowd that backed away and he broke his ankle as a result. This made him realise that what you needed to do was to fall back flat, and later, when he sang a song called ‘Lay Your Hands On Me’, he would stand at the front and fall backwards, trusting his fans to catch him. It was the most unbelievable thing to do, especially for someone who’s actually jumped off the stage and broken their ankles doing that. But he did it and they would pass him around. Lots of rock stars pay lip service to the idea of ‘getting down with the fans’ or ‘breaking down the barriers’ or whatever they choose to call it, but Peter put his money where his mouth was, if that’s the right metaphor.
It was inevitable, however, that it would go wrong sooner or later. On one night – I think it was Pittsburgh – Peter and I headed out of the stage door and into the street, which was always a bit weird with all these buses and taxis everywhere and Peter in his white top with a radio mike. As usual the promoter’s guy was waiting for us at the front of the theatre but this particular theatre had two rows of glass doors, both of which could only be opened from the inside.
Unfortunately, being a couple of light bulbs short of a chandelier, this guy pushed the inner door open and forgot that it would shut automatically behind him. He let us in through the front doors and they shut as well so we were trapped between the two banks of doors; no way in, no way out. Peter and I actually saw what was going to happen before it did. ‘Don’t let it shut,’ I screamed. But I was too late. It was fortunate this wasn’t picked up by Peter’s radio mike.
Of course, there was no one in the lobby as they were all inside listening to the show, and there was Peter and me and this bloke locked out. We could hear the band, just, and Peter started singing when he heard his cue. Luckily there was a loo in the lobby, and two guys walked out and saw us. We’re going, ‘Let us in’ and of course they couldn’t believe what they were seeing. ‘What the fuck… Peter Gabriel’s supposed to be on stage… what the fuck’s he doing here.’ They hesitated and then let us in. We didn’t do the upstairs bit that night, just the walk down the aisle, and the audience – apart from the two blokes who’d been in the loo – was none the wiser. The band knew something was up as they could hear him singing, all the while thinking, ‘Where the hell is he?’
We did that stunt every night on that whole tour, US and Europe, and it never went wrong again but I included the double-door eventuality in my preparations from then on, always checking the front of the house before the show started. To this day, I’ll never forget seeing that bloody door shut behind us.
Posted by Chris Charlesworth