This is the fourth part of my memoir about living in Los Angeles as Melody Maker’s man in America. 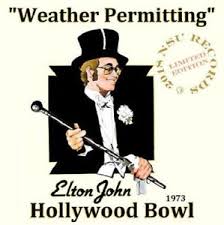 It was while I was staying at the Chateau that I saw Elton John in his glorious pomp at the Hollywood Bowl. Back in the summer of 1970, just before he became famous, I’d watched a largely unknown Elton at a miserable, rain-drenched rock festival near Halifax in Yorkshire and came away impressed. Back in the office I wrote a rave review that was published in the following week’s MM and, honourable man that he is, Elton never forgot this early support, henceforth welcoming me into his company regardless of his ever-increasing status as a rock megastar, a term he coined himself incidentally.
In LA that September Elton was hot. A giant billboard advertising Goodbye Yellow Brick Road, his new album, looked down on Sunset Strip. He threw a lavish birthday party for his manager John Reid at the Beverly Hills Hotel to which I was invited and some wag, maybe Elton, gave him a bronze sculpture of an erect cock and matching balls that delighted Elton’s mum, Sheila Fairbrother, who inspected it closely and declared it fit for purpose. That same week I watched him spin the discs as ‘EJ The DJ’ at a local radio station and a day later he appeared in the open air at the Bowl. Introduced by porn star Linda Lovelace, Elton was preceded on stage by an array of famous guests, all four Beatles, Charlie Chaplin, Batman & Robin, Groucho Marx, Elvis, the Queen, the Pope and Frankenstein, all lookalikes of course. “And here he is,” screamed Linda, “the co-star of my next movie… Elton John.”
“Last to make this spectacular entry was Elton and group,” I wrote for MM. “As he walked towards the front of the stage the look-alikes gathered themselves around five grand pianos, lifting the lids to reveal the letters E-L-T-O and N, and simultaneously releasing four hundred white doves over the heads of the stunned audience. Elton, dressed in a white and silver jump suit with feathers and hat to match, grinned over his white glasses and settled down to open his music with ‘Elderberry Wine’. It was the most spectacular entry on to a stage I and probably everyone else at the Bowl had ever seen.”
The party afterwards, at the Roxy Club, was a ‘must-have’ invitation and my date was Victoria, the blonde who drove me home on my first night in LA, but she abandoned me for a man who arrived in a vintage Rolls-Royce, probably acquired from my friend at the Chateau Marmont.

I was still living at the Chateau when I interviewed the singer and songwriter Tim Buckley whose Starsailor album I liked a lot. He was a rather intense young man, handsome but distracted, almost Byronic, and his death from a heroin overdose two years later took me and many others completely by surprise. “Buckley is no spaced-out American hippie, nor pretentious underground figure,” I wrote in MM. “He’s a serious young man with thoughts on all manner of subjects apart from music; he’s educated and articulate more in the fashion of a forward-thinking college professor than a contemporary musician.”
Ray Manzarek of The Doors, who’d just released a solo album called The Golden Scarab, was my next interviewee; pleasant enough but a bit pompous, very aware of his own, or at least The Doors’, importance, I thought. My appointment with him was arranged by the group’s aide-de-camp Danny Sugerman, who remained a friend for two decades and went on to marry Fawn Hall, the former secretary to Lt. Colonel Oliver North, the soldier notorious for his role in the Iran-Contra affair in the 1980s. Danny lived in a house on a hill behind the Continental Hyatt House where he welcomed all manner of rock’n’roll strays, some of them castoffs from the female clientele at Rodney’s, and I slept there once or twice, not always alone. After Jim Morrison’s death Danny became the nearest thing The Doors had to a manager and in 1995 I would fly to LA to seek his help when my employers Music Sales needed to secure the group’s print music rights.
Danny introduced me to a glamorous publicist named Diane Gardiner who, I was reliably informed, was the LA girlfriend – simultaneously – of Ahmet Ertegun, the boss of Atlantic Records, and Chuck Berry, both of whom she would entertain whenever they were in town. Diane invited me to a birthday party she hosted at her house for Chuck, the only time I ever met this touchy genius of rock’n’roll’s first flowering, and though I’d like to have cornered him for an interview, this wasn’t the right moment to broach the subject. Diane had given Chuck, or Charles as he preferred to be known, a Polaroid Land camera as a present and the great man was much taken with this gift, so much so that he took photographs of everyone at the party, me included. Also present that October night was Diane’s best friend Pamela Courson, Jim Morrison’s lover, who was with him in Paris the night he died; a sad, beautiful creature who in six months would herself succumb to a heroin overdose. “She was the most dangerous girl I ever met,” Diane would later write in the preface to a book on Morrison.
These encounters were not the kind of thing I could convey to the readers of Melody Maker and now – looking back – it astounds me that within the space of a few weeks I’d penetrated LA’s rock world so easily. My rooms at the Chateau had a corner tower that overlooked Sunset Strip and here, on a circular dining table, was where I worked, stuffing A4 sheets into my Olivetti portable, transcribing the words of my interviewees as I watched the traffic below. Each week I mailed a package to London and inside were stories about, and pictures of, Dave Mason, Elton, Linda, Jackson, Glenn & Don, Ray and Tim, guitar heroes Duane Eddy (twang) and Chet Atkins (country), and also actor/singer Richard Harris, who signed a copy of his poetry book I, In The Membership Of My Days for me, and show reviews of Neil at the Roxy, the Allman Brothers at the Forum, Van Morrison at LA Town Hall and, at the Hollywood Palladium, Mott The Hoople and Sly & The Family Stone.
Mott were friends of mine from London, ideally suited to the tacky glitz of the Palladium which was only a stone’s throw from Rodney’s decadent dive, and after the show some of them ended up swigging beer in my suite at the Chateau. Their lead singer Ian Hunter, with whom I would have a memorable falling out two years later in New York, was not among them but their tour manager, Stan Tippins, whom Hunter had long ago superseded as the group’s lead singer, brought along a free-spirited, immodest girl that he intended to marry, or so he said. No sooner had Mott left LA to continue their US tour, however, than she was out on the town again, behaving nothing like a betrothed fiancée, as I had occasion to experience for myself.
The Sly Stone concert at the Palladium lived up to the star’s reputation as the most capricious of performers. He made but a token appearance, leaving the stage after just over a half hour and three songs, apparently satisfied that the customers had had their seven dollars’ worth of entertainment.
“There was a dissatisfied yelling coming from the stage and the drummer re-appeared, commencing the same solo a second time,” I wrote in MM. “Two minutes and Sly reappeared with band to give us two more choruses of ‘I Want To Take You Higher’, and wave to one and all in the manner usually associated with performers who have been on stage for a couple of hours or more. Then he disappeared and so did everyone else. The house lights went up and everyone went home surprisingly peaceably after what had occurred. For what there was of it, the music was tight and entertaining. But other aspects of this show left me with a bitter taste in my mouth. Seven dollars is almost three pounds sterling for half an hour's music – the worst deal I've ever come across.”
I would encounter Sly Stone twice more during my American Adventure, on one of these occasions attempting – and largely failing – to interview him.

Fantastic series; I'm checking everyday for updates.. It was a magical time back then and as someone who would have been in my early teens I couldn't imagine at the time what that must have been like. Thanks for making it real.

this is such an amazing artlcle. I would absolutely love to hear more about the time you encountered Pamela Courson and Diane Gardiner: your impressions and memories! 😊

Thanks Alix. Unfortunately it all happened a long tome ago and I cannot remember anything else, otherwise I'd have included it.