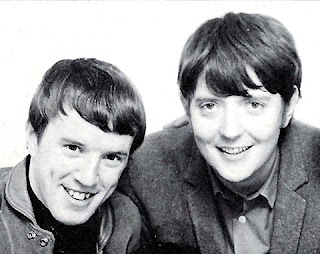 Referencing Chas Chandler in a Slade-related Facebook post a few days ago led me into thinking more about Slade’s larger than life manager and to seek out an interview I did with him in 1972 when Slade were riding high. Headlined ‘Slade Driver’, it was published in Melody Maker in October that year, by which time Chas and I had become good friends. I’ll post it verbatim tomorrow, but first a few thoughts on the Slade Driver.

Of course, my friendship with Chas wouldn’t have arisen had I not been on the staff of Melody Maker and he hadn’t been managing one of the most successful bands in the UK, but in the time I knew him – roughly from 1970 to 1976 – I came to like him a lot. I admired his ‘never-give-up’ attitude towards managing Slade, his relentless positivity and dedication to their cause. He was a big bloke, well over six foot and brawny with it, and while not as confrontational as, say, Led Zep’s manager Peter Grant, it would be unwise to utter a disparaging word about Slade in his presence, especially if he’d had a few drinks.

“They’re like a fookin’ breath of fresh eayer,” he kept telling me the first time I encountered Slade at that Samantha’s disco off Regent Street in 1970. He was yelling that into my ear all through the gig. He had to yell. The band on stage were always deafeningly loud.

“The band bloody worshipped Chas from the word go,” tour manager Graham ‘Swin’ Swinnerton told me when I was researching my Slade book. He was right. Hanging around with the five of them in the early seventies, especially before the hits started coming, it was easy to detect the group’s admiration for their manager, this devoted Geordie who would scream about them from the rooftops if he thought it would advance their career.

“He was strong at dealing with us and he was strong at dealing with the record company,” Noddy told me in 2005, a decade after Chas had left us. “He had so much confidence in us it wasn’t true.” When Chas told him and Jim to buckle down and write some songs they did just that, fearful that Chas might drop them if they didn’t. “We’d have done anything to avoid that,” added Nod.

“He was one of those big men with unlimited energy who’d sweep you along with the force of his conviction,” wrote his great friend Keith Altham in an obituary that appeared in Mojo magazine. At Chas’s funeral Keith told the congregation about a plan Chas had to link Perth and Sydney by canal. No project, however unlikely, was too big for Chas to contemplate.

Chas Chandler was a man of the world, well-travelled, well versed in the ways of the music business and pretty much fearless, well able to look after himself in a tight situation. He told me he once spent a night in jail in America after punching a cop backstage at a Jimi Hendrix concert. Another time, in New York, we were riding around in a limousine together when he asked the driver to take us down to the Bowery where he might find a lady of the night to keep him company. He knew precisely where to find such a companion but failed in his mission, largely because his thick Geordie accent was incomprehensible. “Alreet luv. ’Ow’s it gan hinny?” he said to the startled girl. “Are ya doin’ buzzziness?” She looked at him like he was from Mars. I had to laugh.

Like Peter Grant, Chas was a manager from the old school who led from the front, placed a high premium on the security of his charges and didn’t like to miss a gig. Equally importantly, he was always one for the big gesture, something that would attract publicity, a move that would get Slade noticed. “Ya can be the best fookin’ band in the fookin’ world but if no one knows about it who gives a fookin’ toss?” he said.

That was why, at PR Keith Altham’s suggestion, he persuaded them to become skinheads in late 1969. He knew the papers would latch on to this as a story and although there was a bit of a backlash, it worked. Then again it might not have worked had Slade not been such an experienced, well-drilled live act. A gimmick and a bit of silly press can only get you so far but if you don’t have the chops to back it up you’re doomed. Slade had chops to spare.

In 1972 Chas lived with his lovely Swedish wife Lotte and young son Stefan in a fine detached house at Lingfield, about 25 miles directly south of London, not far from Gatwick Airport. I remember driving down there to do this interview on a Sunday afternoon, eating dinner and spending the night chez Chandler since the booze we drank rendered me hopelessly incapable of driving back to London. Chas liked his booze and fags, and he liked to smoke joints, big ones too, but I never saw him do any stronger drugs.

Although he was the bass player for The Animals he didn’t rate himself much as a musician and once told me he’d be embarrassed to play in front of Jim Lea. He looked on his time with The Animals as an apprenticeship for a far greater mission, managing Jimi Hendrix and then Slade. Like many acts in the sixties, The Animals were ripped off wholesale and he made sure the same thing didn’t happen to Slade.

I stood next to Chas at the side of the stage at Earls Court on July 1, 1973. He’d been made aware of the problems that David Bowie suffered in the same venue on May 12, the first time Earls Court had hosted a rock show. Bowie’s PA system was inadequate, the acoustics were terrible and the band performed at floor level, all of which led to serious crowd disturbances and could probably be blamed on Bowie’s management skimping on costs. Chas was having none of that for Slade, who became only the second act to headline Earls Court. Midway through the show, as we gazed out at 18,000 Slade fans having the time of their lives, he was yelling into my ear, just like he did way back when at Samantha’s: “All yee’ve got to do in a place like this is to build a big fookin’ stage and light it properly. And get a decent fookin’ PA. It’s as fookin’ simple as that.”

As everyone knows, the night was a triumph.

The last time I saw Chas was around 1994 at Champneys, a private health club on Piccadilly in central London. He’d lost weight, was pasty faced and looked much older than I remembered him. If he was unwell, he certainly wasn’t there to improve his physical fitness – heaven forbid – but because it had a posh members-only bar and restaurant. Keith Altham had set up a meeting, the purpose of which was an attempt on my part to persuade Chas to write his life story. (Keith had set up all the interviews for my Feel The Noize! book.) I knew Chas read a lot, science fiction mostly, and I half succeeded insofar as he promised to think about it. In the event he died two years later and it never happened but I often wonder whether he made a start on it. If he did, it never came to light.

By this time Chas had moved back to the north east and settled down with his second wife, Madeline Stringer, a former Miss UK, with whom he had two daughters, in the coastal town of Cullercoats. A few miles east of Newcastle, this was where I attended his funeral on July 22, 1996. He had devoted the last few years of his life to his role in the creation of what is now the Utilita Arena Newcastle, the largest concert and exhibition venue in the North East, which had opened in 1995. By all accounts he put as much effort into this as he did as Slade’s manager, learning all about the construction business with the same dedication he put into handling their career.

Unfortunately, no one thought to erect statue of Chas outside.

Another fabulous read. I look forward to tomorrow

I've had to go into the attic and fig out the scrapbook containing the article...... Must have read it a million times in the early to mid 70's!