One of the great things about being Melody Maker’s man in New York was that it was just me, so tickets to all the best concerts weren’t shared around as they were in London. Those I reviewed were nothing if not eclectic. A glance at back issues of MM reveals that in April, May and June of 1974, I saw, amongst others, Rick Nelson, Steely Dan, Greg Allman, Grand Funk Railroad, Todd Rundgren, Roger McGuinn, Charlie Rich, Harry Chapin, Roxy Music, Sly Stone, The Who and David Bowie. Some of these will feature in future instalments of these memoirs.

I was particularly looking forward to seeing Steely Dan. When their first LP, Can’t Buy A Thrill, was released in late 1972 a copy arrived in MM’s offices on Fleet Street and, curious, Richard Williams, our assistant editor, put it on the office record player. It wasn’t long before those of us there that day stopped what we were doing to listen. “This is great, who the fuck is it?” we wondered as we gathered around the low-fi deck that IPC Business Press had so generously bestowed upon the massive cash cow that MM had lately become. For the next few months CBAT was on and off that deck more than any other LP.

(As an aside here it is worth mentioning that Melody Maker’s neighbour along the corridor of the IPC building was Cycling Monthly whose editorial staff once complained to Ray Coleman, our editor, about the volume from that record player. In his carefully considered response Ray declined their request to order us to turn the music down. “Our staff need to play records to review them and do research,” he wrote in his memo to their editor, adding: “We will not complain should the staff of Cycling Monthly ride bikes up and down the corridor to road test them.”)

But back to Steely Dan. On the same day as their April 3 concert at Avery Fisher Hall I interviewed Walter Becker and Donald Fagen at their record company’s offices, which was not quite as challenging as I had been led to believe, by which I mean they were friendlier than I expected. Perhaps this was because I was among the first British journalists to interview them. Also, bearing in mind their intellectual approach, I had taken the time to read up about them and play their music a lot. Come to think of it, I still do.

By this time, Steely had released three LPs. The most recent, Pretzel Logic, a firm favourite of mine, was their first to reach the US LP Top 10, and Becker and Fagen had now emerged as co-leaders of the group, composing all the material and laying down the law as far as advancement was concerned. But there was trouble afoot. These two were increasingly reluctant to tour and appeared to be demoting the rest of the group. They had yet to become a studio duo backed up by the world’s classiest session musicians but it was on the cards, and Becker and Fagen hinted at it while we spoke. 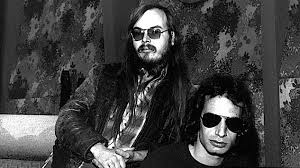 “Fagen is a tall, thin man with a slight hunch, probably caused through leaning over a piano for much of his life,” I wrote after a brief summary of their career thus far. “He’s a serious musician who isn’t afraid to voice his opinions on current rock giants, for whom he has little respect. Becker is pretty much the same, except that he’s short and tubby. Both would sooner spend an evening in a jazz club that at any rock concert you’d care to name.”

“The band is in hibernation for certain parts of the year,” Fagen told me. “[Guitarist] Jeff Baxter goes and does some studio gigs or goes on tour with Linda Ronstadt, and the others do the same while we are writing. Then we all get back together again and make a record.”

“I like to think that we don’t have to be limited by the concept of the group,” said Becker. “If one of our people wants to play with someone else and there’s time to do it, then it’s fine with us.”

Both spoke about the ‘horror’ of touring soon after Can’t Buy A Thrill was released, before they were ready. “Actually, Walter and I were complete novices as far as actual live touring was concerned,” said Fagen. “It took a while to find out what really happens at live shows. For all our experience in theory, we didn’t know much about the actual practice. We weren’t show orientated because we were jazz fans and were used to seeing musicians kicking over their bottle of beer while they were playing a solo. As far as we were concerned the show was watching a guy play and that was it, strictly for enthusiasts.

“It was a new thing for us to be playing on a bill supporting Elton John. We’re still not a show band. We try to arrange the show so that it’s dramatic musically rather than visually.”

The concept of ‘putting on a show’ was quite foreign to them, and not something they were prepared to countenance. In this respect they had trenchant views about commercialism and weren’t afraid to stick the oar in when it came to bands they didn’t much like. Diplomacy wasn’t their scene.

“It always has been [commercial], but never more so than now,” said Fagen. “It just happened that in the sixties there were bands who came up one after the other with original ideas, but now everyone seems to be copying each other. I never seem to hear anything new. The last thing I heard that was really and truly new was the first Band album. The second was good too but after that you could chuck them out of the window.”

Their explanation for the success of British bands in America was simple. Becker: “American people love to hear an English accent. English bands seem to have a flair for a certain type of presentation that was exciting when it first came out. Groups like The Who put on the kind of show that American bands would never do.”

“But it is true that the American people are inexplicably attracted by the English accent,” agreed Fagen. “It’s alien and it’s exotic and they never seem to get used to it. Even I think that. There’s a lot of English acts could fill, say, Madison Square Garden, but there’s very few of them I would go and see. It’s ironic that an English band will come out playing the blues and the blues started in America.”

Becker: “I will begrudgingly admit that English bands are more polished performers. Their recordings are more carefully made and even the bad ones sound kinda good to me somehow. They’re better than their American counterparts and I can’t understand how that is.”

The main reason why the terminally interview-phobic Dan men had agreed to speak to MM was because they’d be playing concerts in the UK the following month. Fagen was looking forward to it. “I have a feeling that European audiences will be more appreciative of our music. American audiences are fantastic but I don’t know what they appreciate.”

“You can’t tell what they’re into at all,” said Becker. “From the stage, you see people at the front and they’re obviously into volume, a self-abuse trip. As for the rest of the audience we don’t know. We hope it’s the music.”

“People who take their clothes off are into rhythm and we’re into that,” said Fagen enigmatically.

When I turned the conversation towards which groups they did and didn’t like it was clear they were hard to please. Indeed, they disliked almost every rock group on the planet, especially those from the world of glam. Their most hated group of all appeared to be my friends Slade, with whom they had shared a bill. “How they ever managed to get enough money together to come here and tour is a miracle,” said Becker.

Uriah Heep was another whose popularity amazed them, along with Deep Purple and Black Sabbath. “Black Oak Arkansas is an American band who imitate that kind of music and they’re absolute trash,” said Fagen. “I can’t listen to them. Even if I might enjoy the visual thing, I couldn’t possibly stay in a room and listen.”

Becker agreed. “The more complex groups like Yes or Jethro Tull or Emerson Lake & Palmer are more interesting, but I’ve yet to hear one of those groups that has developed into anything more than quick changes and super niceties.

“Yes is a very polished group, but I don’t particularly like their music,” added Fagen. “Their music doesn’t seem to hold together. We might be prejudiced because we like short songs and they like long songs. It has a sort of artificial sound, though, like it was put together deliberately to appear complicated.”

One musician they did like was Frank Zappa. Fagen again: “A lot of those groups seem to me as if they picked up on Frank Zappa many years ago. Zappa puts a lot of complex things together which probably don’t make much sense but he looks at it with such a comical eye and the English bands don’t think it’s funny. They take it very seriously.

“I’ve been to see about five rock concerts in the last five years and most of them have been Frank Zappa concerts. We’re really out of it as far as rock is concerned. It’s too loud. I’d go to see Joni Mitchell. She uses interesting chords.”

“OK. I might not go see her live, but I have bought Joni Mitchell records,” Fagen corrected. “Her voice terrifies me.”

In the light of this discussion it probably didn’t delight Becker and Fagen that they were supporting Electric Light Orchestra at the concert that evening. I got there early, determined not to miss anything. In the event it started late due to ‘technical’ problems that marred Steely Dan’s set throughout, a failing monitor system to blame, along with whining feedback. It was so bad that they stopped one number shortly after it started and began again.

Having mentioned all this at the start of my review, I continued as follows: “It would, I feel, be unfair to judge them on this display. It doesn’t happen often but it has a nasty habit of happening in New York.

“Fagen is the focal point of the outfit. His grand piano is placed squarely in the centre of the stage and he frequently abandons his stool to conduct the rest of the band with his hands, turning his back on the audience as he does so.

“The accent is very much on percussion with two kits and a conga player. Perhaps it was that sound system, but frequently the percussion drowned out the rest of the band. The twin guitars flow in unison for much of the set, and at times they sounded very influenced by Santana.

“At their best they were magnificent, but this high was only reached occasionally. Problems or not, it was obvious that Steely Dan have set themselves a high standard and, as they told me earlier, were not content to sit back and play their rock and roll like everyone else.

“Most of their numbers are fairly short, and the material was mainly from their new album Pretzel Logic. They finished with ‘Reelin’ In The Years’, their first major US hit, and a sympathetic audience brought them back for an encore. The band looked grateful, but it was obvious they were far from happy with the evening.”

The next time I saw Steely Dan was at Hammersmith in the year 2000. There were no sound problems that night.