My Melody Maker credentials made it remarkably easy to infiltrate New York’s rock’n’roll scene. The paper was selling 200,000 copies a week back in the UK and labels were well aware that coverage in MM would help their acts sell records there. I soon became a familiar face among the rock’n’roll cognoscenti. I saw the same men and women at clubs like the Bottom Line and Bitter End or backstage at gigs or at record company parties and was soon on Christian name terms with all the city’s music writers, PRs, and a few managers and concert promoters. It was a bit of a closed world but, boy, did we enjoy ourselves.

As far as I was aware, there were three rock photographers operating in New York in those days: Bob Gruen, who was everywhere that mattered, Leee (note the three e’s) Black Childers, who was outrageously gay and favoured the glam world, and Chuck Pulin, who seemed the least well connected, at least to me, and worked for Sounds. Leee’s pictures had already appeared in MM when Roy Hollingworth was our man in NY but my instincts told me Bob was the man to approach as my photographer of choice to accompany me to interviews and shows where I needed a picture to illustrate my story. We cut a deal that suited both of us. Any picture he took where access was enabled by me belonged to Melody Maker for one month. Thereafter it was his to sell to all and sundry in perpetuity. We saw a lot of rock together and became good friends. Still are.

Bob operated out of a cramped apartment on the Lower West Side and could be counted on to fill me in on whatever was happening in the New York rock world. Every time I called Bob he’d say, “What’s happening, man?” and sometimes he’d call me and open up the conversation with the same question. Of course, Bob always knew what was happening more than anyone else I knew in New York, whether it was on the streets or in the clubs. It was instinct with him, and I liked the fact that he was just as enthused about taking pictures of some unsigned punk band as he was taking pictures of The Rolling Stones, Led Zeppelin or John Lennon, with whom he developed a close relationship. Bob was an energetic, wiry little fellow with afro-styled hair. He drove a beat-up old VW Beetle, always wore a black leather jacket, t-shirt and jeans and more often than not had a tiny spliff clamped between his lips. For all his energy, he was as laid-back as anyone I’d ever met, unflappable, Mr Cool. Still is. 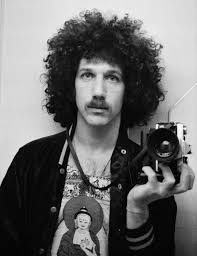 Bob Gruen. I think this is a self portrait.

Inevitably, it was Bob who introduced me to the New York Underground. It was a matter of routine for me to write about acts, famous or otherwise, that were contracted to record labels but it was quite another thing to venture out on my own initiative to see an act that wasn’t signed and wasn’t expecting any interest from a paper like MM. I’d heard a bit about rowdy young bands playing in a rough downtown club on the Bowery called CBGBs and in a club not far away called Club 82, and I decided to check out this scene for myself. I was a bit unsure about all this so I called Bob for advice. He suggested I join him in a couple of night’s time in Club 82 where a band he liked called The Stilettos was playing. “There’s this singer, a blonde girl, looks just like Marilyn Monroe,” he said on the phone. “Check her out man, you won’t believe it.”

Club 82 was an old-style drag club with mirrors everywhere, famous in its day for its risqué floor shows but now fallen on hard times, and the girls who worked it, all of them of a certain age with short cropped hair and dressed in dark men’s suits with buttoned-up shirts and ties, had figured that a bit of rock’n’roll might keep the creditors at bay. For a while it became a sort of sister club to CBGBs, of which more later, but it was never as well-known. Still, it was fun, with more of a party atmosphere than CBGBs. On the night Bob suggested I paid my $3 on the door – no freebies for MM writers here – and went inside, bought a beer and found him by the stage, camera at the ready.

The Stilettos turned out to be supporting Wayne/Jane County, with whom I was already familiar because I’d seen him/her at Max’s Kansas City. The support act, The Stilettos, was a trio, backed by a four piece, who took their cue from the girl groups of the pre-Beatles Sixties. There was a black girl, a redhead and a blonde who stood in the middle and appeared to be the leader, and Bob was right. She wore a clingy, low-cut, full-length, off-the-shoulder, satin ball gown in all gold that flattered her figure, and she was a dead-ringer for Marilyn, with platinum hair, a cute smile and strawberry lips. Their set was under-rehearsed and short – everybody’s was down there – and afterwards Bob took me backstage to meet her.

Her name, of course, was Debbie. Up close she was incredibly beautiful, but she was also cool, committed and she knew her pop. I tried not to let her appearance interfere with my interviewing technique as we talked about this and that while Bob took some more pictures. She told me she wanted to be a full-time singer but she had a daytime job in a New Jersey beauty parlour right now. She hoped someday to get into the music business full time. I told her I’d stay in touch and she gave me her phone number. Bob took some more pictures, and I went away and, in a week or two, mentioned her and The Stilettos in a generic piece I wrote about several unsigned New York bands who were operating downtown.

“Never had I seen the 82 more crowded than about three weeks back than when Wayne County topped the bill over The Stilettos,” I wrote. “Wayne came out in full drag which was pretty stunning, but the music was overly loud and under inspired for my tastes. He went down a bomb though.”

The piece mentioned 10 other acts, but I found room for Debbie. “The Stilettos, who opened up, had more potential but less rehearsal. Fronted by a cuddly platinum blonde called Debbi (sic), they’re a girl vocal trio with a male guitar/bass/drums back-up band. The three chicks take turns to sing solo while the other two chant away behind, and some of the songs were well worth putting on vinyl. Ninety-five per cent were original, but the style was taken from the late 'fifties era of vocal groups.”

I have good reason to believe that the 74 words in that second paragraph – out of a total of about 1,500 in the whole piece – were the first ever to be written about Debbie Harry that appeared in a British paper, music or otherwise. 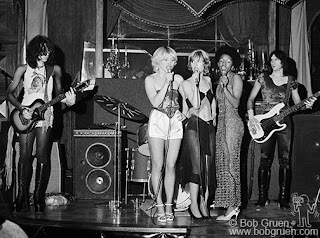 It just so happened that Bob gave me a few pictures of Debbie that I sent over to London and, somewhat inevitably in the light of her appearance, someone on the subs desk at MM opted to use them to illustrate the feature. A week or two later that issue of MM landed on my doorstep so I called her up at the beauty parlour where she worked and told her that her picture was in Melody Maker. She was very excited about this. It was evidently the first time she’d ever had her picture in a magazine, or so she told me, and she seemed desperate to get her hands on a copy.

A night or two later she drove up to my apartment on East 78th Street in an old green banger with bench seats. I gave her three copies of the paper and took her out to dinner at a Japanese restaurant on the West Side. Over sushi and tempura and sake she told me that The Stilettos were breaking up and she was forming a new band with her boyfriend, Chris Stein, their guitarist, its name as yet undecided. I took note of this and would mentioned her plans in my next MM New York news column, no doubt the first mention of the fledgling Blondie anywhere.

It was around midnight when Debbie Harry drove back through Central Park to drop me off at my place over on the East Side. Before getting out of her car I pulled her towards me across the bench seat, kissed her on the lips and invited her inside. But I was too late – she’d already met that other Chris.