It’s almost a year since my memoirs of the time I spent in New York as Melody Maker’s US Editor ground to halt. In the meantime, I went out of sequence by writing about my route to MM and first few days on the paper, but I’m back in 1974 again now and over the next few weeks will continue to write about what I got up to that year. So here’s the first instalment of this new instalment…

New Yorkers will tell you that the season they call the fall and we call autumn is the best month to be in the city but I preferred spring when I lived there. Of course, I came to realise that the colour of the trees in Central Park as they shed their leaves was a beauty to behold, but Manhattan winters were mighty cold so it was a big relief when the winds that whipped around those blocks eased off and what the weathermen called the wind chill factor was no longer an issue, especially for the likes of someone who’d been mollycoddled by our temperate British climates.

One Tuesday morning in the spring 1974 I decided to walk the length of Fifth Avenue, from 78th Street, where I lived, all the way down to Washington Square, a distance of about three miles. I’d lived here since the beginning of the previous December and it was high time I tasted Manhattan on a sunny day. I wanted to look at the people, the shops and cafes, to watch the yellow cabs whizzing by, to gaze up at the Empire State Building as I passed 34th Street and the Flat Iron Building where Broadway disrupted the grid pattern at 23rd Street. I wanted to get a fix on the city I now called home, the skyscrapers, the lattice-like layout of one-way streets, bisected by Fifth Avenue, that alternated east to west or west to east, apart from the big wide ones at 72nd, 57th, 42nd, 34th, 23rd and 14th. It was only when my sister or friends from outside music arrived for a stay that I indulged in any traditional sight-seeing during my time there. I was less interested in seeing the established tourist sights than getting to know my way around this concrete world and, of course, experiencing its rock’n’roll.

When I reached Washington Square old men were playing outdoor chess on tables with chequered boards etched on to their surfaces and young men were playing Martins, their velvet-lined cases open in front of them to collect change. A crowd had gathered around one busker. “Far from the twisted reach of crazy sorrow… let me forget about today until tomorrow.” I smiled at the thought of Bob carrying his guitar across this square in maybe 1964 or ’65, writing the songs for Bringing It All Back Home and this one in particular, or earlier when he lived on West 4th Street with the lovely Suze Rotolo, with whom he was photographed, hunched up against the cold, for the cover of the Freewheelin’ LP.

The grid pattern loses its symmetry below Washington Square and the maze of streets beyond, known collectively as Greenwich Village, have names instead of numbers. I would come to know Bleecker, the most famous, well. Further south we find Soho – which stands for South of Houston (Street) – and then Little Italy, Chinatown and, finally, the Wall Street financial district, not really my cup of tea. But they’d have to wait until another day as after three hours doing nothing I was hungry. I bought a sandwich – probably ham and cheese on rye – in a deli and ate it while I listened to the busker. I gave him fifty cents, then took the subway back to 77nd Street, which cost a quarter in those days, walked back to 51 E 78th Street where I settled down to write up a review of Rick Nelson and the Stone Canyon Band whom I’d seen a few nights ago at the Bottom Line Club.

Many years ago I owned a few of his singles on the black and silver London American label, among them ‘Poor Little Fool’ and ‘My Babe’, which I played in a teenage covers band. He was Ricky Nelson then, and from the age of eight he’d appeared in a prime-time US family-friendly TV sitcom called The Adventures of Ozzie and Harriet. A career as a teen idol followed, his records much enhanced by the guitar playing of James Burton, but I’d been given to understand that he was now a mature performer, leaning towards country. Indeed, his song ‘Garden Party’ was geared towards giving the impression that he’d shaken off his earlier image and entered into the seventies in a spirit of renewal. Unfortunately, that didn’t seem the case to me.

“Nelson is as much steeped in nostalgia as the rest of them,” I wrote. “His set at the Bottom Line Club last weekend was about two-thirds drawn from his old repertoire with very little added to the basic arrangements. Nostalgically, it was mildly entertaining, but musically it was flat. The reason was quite simple: after a while all his songs sounded pretty much the same. They all seemed to be in same key, sang at the same pitch and at a similar tempo. They were all a little countrified thanks to the steel guitar wizard in the band, and Nelson’s own sorties on the guitar hardly qualified him for the virtuoso league.

“He still looked good, though, in his Nudie western shirt with rhinestone collar, but it was all too easy going for me; sort of supermarket pop brought up to date, if you know what I mean. The material included some out and out rockers like ‘My Babe’ which was a hit for him long, long ago; some of the traditional Nelson melodies like ‘Hello Mary Lou’, ‘Travellin’ Man’ and ‘Lonesome Town’; and some new material which, of course, included by far his most impressive recent offering ‘Garden Party’. 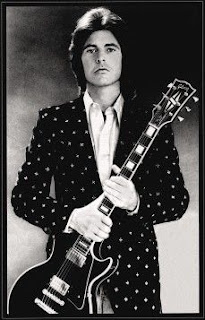 “The audience lapped up the older material and remained totally indifferent to the newer stuff, which probably frustrates Nelson when he tried to introduce something new along the way. One member of the audience insisted on yelling for ‘Poor Little Fool’ between every other number, but it transpired that the Stone Canyon Band (bass, lead, drums and slide) didn’t know it.

“When The Ozzie and Harriet Show was the biggest thing on American TV, their two sons portrayed everything that the all-American clean-cut kid ought to be. Rick ain’t changed much.”

The Bottom Line, which held about 400, hadn’t been open that long when I arrived in New York, and I would go there to see shows at least once a month. In the next couple of years I saw dozens of acts there, among them Bruce Springsteen and Little Feat, and most times I had a ‘tab’ from the record company whose acts were playing. This meant I was entitled to free drinks. I asked the waitress for whatever I wanted and gave her my tab so she could add it on, and at the end of the night handed it in at the bar. I can’t remember if there was a limit – there probably was – but the bill was then sent to the record company.

All of which meant that I never needed to have much money on me when I set out for evenings like this. The Bottom Line was on West 4th Street, not far from the Bowery and Lower East side, an area I’d been advised to avoid at night, so I always made a point of dressing like someone who wasn’t worth mugging, which more or less meant I fitted in quite easily with the clientele at the Bottom Line. After a show there, I could catch the subway all the way back uptown, switching from local to express for 72nd Street, and be home in less than half an hour, all for a quarter, the price of any subway journey, regardless of length.  They ran all night too, and though they were much dirtier and noisier with  uncomfortable metal seats, they certainly had the jump on the London Underground.

We saw Rick that same year, at Knott's Berry Farm. Basically the same set, but he was so impaired it was pathetic. We were with friends, and the 5 of us said amongst ourselves how really awful the show was. As we were leaving, I noticed that Rick's brother David and a friend were sitting right behind us. They didn't seem impressed, either. What a shame.