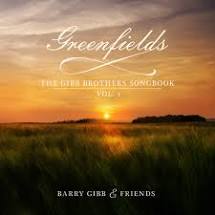 My Just Backdated posts about Gillian Welch and her musical partner David Rawlings don’t get that many hits compared to those on the popular rock bands I write about, but I’ll keep plugging away. The latest little Welch/Rawlings gem to reach my ears is ‘Butterfly’, a track on Greenfield: The Gibb Brothers Songbook Vol 1, the recently released album of Bee Gees songs recorded by Barry and various country artists.

Chosen as the lead track, it is a song I’d not heard before, written and recorded by the Brothers Gibb in Australia before they arrived in the UK in 1967. It first saw the light of day on an LP called Inception, a compilation of early recordings by the Gibb Brothers that was released without their approval in 1970. The tracks were a mixture of originals and covers, including four Beatles songs, all recorded in Australia in 1966.

Since quality control is high on the agenda for Gillian and David, it goes without saying that ‘Butterfly’ is a lovely song, very suited to their harmonic skills and reminiscent of The Everly Brothers at their melodic best on songs like ‘ALL I Have To Do Is Dream’, ‘Long Time Gone’ and the sublime ‘Kentucky’. A count-in and some characteristic sharp end guitar picking by Rawlings leads into the opening line, ‘Green fields where we used to wander’, suggestive of the album’s title, sung in soaring, expansive unison by Barry, Gillian and David. It’s a floaty, melodic love sung, surprisingly mature when you consider that the eldest Brother was just 19 when it was written, his brothers only 17.

Though the album as a whole is firmly country, and includes duets with Dolly Parton, Keith Urban and Alison Krause amongst others, ‘Butterfly’ leans towards the bluegrass style of Welch’s own records, a mid-tempo ballad that flows like the best of those expansive early Bee Gees songs. Trivia fans might be interested to know that in 1965 and 1971, respectively, it was also recorded by the UK bands Unit 4 + 2 and Marmalade, and in 2013 The Bee Bees sanctioned the release of Inception, including ‘Butterfly’, which they retitled Bee Gees Diary.