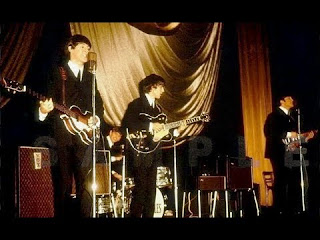 My dad took me to see The Beatles at the Gaumont Theatre in Bradford on December 21, 1963. He would have been 52 at the time but he liked his pop music and seemed to like The Beatles, though not with the same fervour as myself. I think he was just curious to see what all the fuss was about, and in 1963 in England you had to be deaf, dumb and blind not to notice the fuss that surrounded The Beatles.
It was the height of Beatlemania. There weren’t many boys in the audience, only teenage girls and the sense of anticipation was ridiculous. All around me girls were quivering with excitement, clutching their heads, whimpering like puppies. Dad and I sat through the support acts, all five of them (The Barron Knights & Duke D'Mond, Tommy Quickly, The Fourmost, Billy J. Kramer & The Dakotas and Cilla Black), and compere Rolf Harris. The Barron Knights, a comedy group who mimicked others, opened both halves of the show, Billy J. closed the first half and Cilla came on before Harris stalled for time while the Beatles’ drums and amplifiers were set up behind the curtains. During the delay Harris was completely drowned out by the noise, and drawing sketches of the four Beatles’ faces on his charcoal pad simply made things worse, encouraging more and more screaming.
Then he introduced them, the curtains parted and there they were, John, Paul, George & Ringo, the princes of pop in their shiny brown suits and black Cuban-heeled boots, squinting beneath their fringes, jiggling their guitars and trying to sing above the incredible din. Absolute pandemonium! They were only on for about 25 minutes and they were completely drowned out by relentless screaming which didn’t let up for a second. I don’t think I heard a word they sang or a note they played, even though dad and I were quite near the front, on Paul's side, but it was the most exciting thing I'd ever seen in my life, an unbelievable experience. John was pretty much motionless, leaning into his mike, his Rickenbacker high up on his chest, his feet planted firmly apart as he faced down the screams, but Paul and George moved around a bit, approaching their microphone together to sing while Paul shook the long neck of his violin bass, which simply added to the turmoil. George's Gretsch guitar looked huge on his slight frame. All hell broke loose when Ringo sang, and stewards had to hold back girls who rushed out of their seats to the front. We stood for the whole show. I was spellbound, electrified. 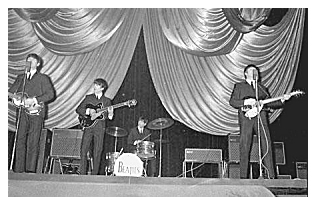 This picture and the one at the top of the post were taken taken at the actual gig. I found them on the internet but I have been unable to discover who took them. If anyone knows please get in touch.

I didn’t take notes (that would come later) but subsequent research has revealed they played ‘Roll Over Beethoven’, ‘All My Loving’, ‘This Boy’, ‘I Wanna Be Your Man’, ‘She Loves You’, ‘Till There Was You’, ‘I Want To Hold Your Hand’, ‘Money (That’s What I Want)’ and ended, as usual, with ‘Twist And Shout’ sung by John with Paul and George belting out the responses, all three joining in on the ascending climax accompanied, naturally, by another wave of deafening screams. When it was over the curtains closed abruptly and the girls around us began to sob uncontrollably, weeping hysterically. Meanwhile the four Beatles and Neil Aspinall would have dashed out of that theatre into an awaiting car in the blink of an eye, and were no doubt several miles away by the time the mums and dads waiting outside were reunited with their distraught daughters.
I never mentioned any of this to John and Paul when I interviewed them for Melody Maker in the seventies. They’d moved on and so had I, so it didn’t seem appropriate somehow – but well over 50 years later I remember that December night at the Bradford Gaumont it as if it was yesterday, just the best Christmas treat ever. Life-changing really.
Posted by Chris Charlesworth