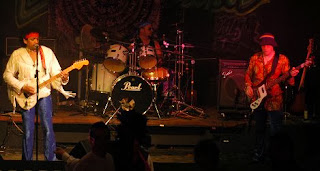 I didn’t miss much of note during my years on MM but a few got away, most notably Elvis, The Doors and Abba because I was never in the right place at the right time. Another, deeply regretted, was Jimi Hendrix who died soon after I joined MM. I remember the front page we put together.
This was partially remedied on Sunday night at the Half Moon in Putney where Sam and I had our minds blown by Are You Experienced, a Jimi tribute trio led by guitarist John Campbell who bears a passing resemblance to the man himself and, being right handed, plays a white left-handed Strat upside down with the strings reversed, so in effect he’s playing like Jimi but as a mirror image.
In a white fringed top and crushed blue velvet flares, Campbell is a nifty duplicate who ticked all the boxes even if his friendly brummie accent was 12,000 miles away from Jimi’s native Seattle. He played all the songs you’d want to hear too, very fluently, big on volume, fingers off, plenty of feedback, moving gracefully across the small stage to interact with his beefy bass player in dark granny glasses a la Noel and solid, far-from-flashy drummer.
Jimi’s Dylan covers, ‘… Watchtower’ and ‘… Rolling Stone’ were terrific and John conjured up Jimi’s elusive liquid tone on slower songs like ‘… Mary’ and the bluesy ‘Red House’. ‘Hey Joe’ morphed into ‘Star Spangled Banner’ into ‘Auld Lang Syne’, and on ‘Foxy Lady’ he invited a bevy of girls on stage to dance go-go style, then pull on his wang bar while he soloed; almost as suggestive as the man himself.
He closed, inevitably, on ‘Voodoo’ Child and returned with a cheap Strat copy for ‘Wild Thing’ which at the end he doused with lighter fuel, set alight and smashed to smithereens. Great fun.
The set was two hours long, and we paid just £10… superb value for money and if he comes to your town definitely worth a shot.
Posted by Chris Charlesworth