Last year a friend of mine visited New York and, at my prompting, kindly took the photograph below of the doorway to this building, where I lived from early 1974 to early 1978. It was effectively MM’s office in New York for up in Apartment 3D (3rd floor on the right of the pic) I tirelessly bashed out many thousands of words – interviews, reviews, news columns – on a small Olivetti portable typewriter. In one corner of the living room was a pile of MMs; in another corner a stack of albums, 100s of them; and stuck to the wall opposite my desk was a big blue quilt on which I pinned buttons and badges, backstage passes, invitations, concert tickets (rarely less than three shows a week; once, memorably, three in one night: Johnny Cash, Beach Boys and Patti Smith) and bits of paper with phone numbers and scribbled notes reminding me of appointments.
The building was between Park and Madison Avenues, a lovely part of the city; close to the Metropolitan Museum of Art and, in nearby Central Park, a statute of Peter Pan by a lake where old men sailed beautiful model boats. In the summer I used to scribble my reviews on a yellow legal pad sitting on the grass by the lake, then return to the apartment to type them up (double space, in duplicate using carbon paper, remember that?). I always thought autumn (fall) was the loveliest season in NY, the colours of the leaves falling from the trees in Central Park, the greens fading to orange and brown, the pleasant temperature, and the relief at being able to turn off my noisy air conditioner after another stifling summer.
Around the corner, on Madison in the direction of 79th Street, was a Greek coffee shop where I had a late breakfast almost every day – freshly squeezed orange juice, home fries and scrambled egg on toast, and coffee – while reading whatever two-day-old English newspaper I could find at the newsagents on the other side of the street. Then it was back to the flat to write or make phone calls. After that no day was ever the same, weekdays blurring into the weekend as rock’n’roll never stops. My deadline was Thursday afternoon, 3pm, when a courier called to pick up my weekly parcel to London, a packet of 20 or more sheets of A4 paper and usually some photos taken by my pal Bob Gruen. 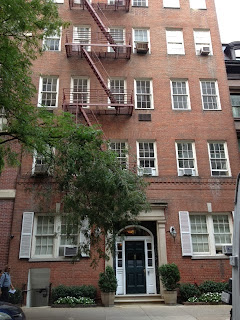 It was the best job in the world.

(Thanks to Emma Cooper for taking the picture.)