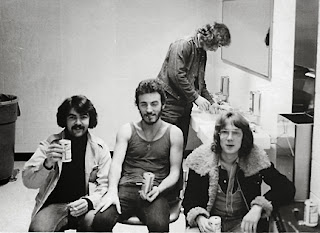 In January, 1974, a member of the E Street Band took this picture of me with Bruce Springsteen backstage at the Chrysler Theatre, Norfolk, Virginia. On the left is Columbia PR Mike O’Mahoney with whom I’d spent the previous few days in Nashville reporting on the label’s country music sales conference (and staying at Roger Miller’s ‘King Of The Road’ Motor Inn), and whose camera the picture was taken on. A loquacious Irishman, Mike had somehow persuaded the top brass at Columbia to lend us their corporate jet so he and I could head eastwards to see two gigs by their number one protégé before returning to New York, so we saw Bruce and the E Street Band at a club called the Mosque in Richmond, Va, too. This was 18 months before ‘Born To Run’, of course, and the set was about 75/25 originals/covers. I remember him doing ‘Rave On’ and ‘Pretty Flamingo’; simply breathtaking though Bruce, vexed at being called ‘the new Dylan’, was moody and reluctant to do an interview. He only came alive on stage.
During WW2 my dad was a gunner on ships that crossed the Atlantic and he told me that in 1943 he’d docked at Norfolk, Va, and sunbathed on the beach, so the morning after Bruce’s show I went down to the beach myself and gazed out to sea, over the Atlantic to home, then wrote him a postcard saying I was following in his footsteps.
Posted by Chris Charlesworth