When Bo Diddley died in 2008 I was asked to write an introduction to a book of sheet music of his songs, though why anyone would need sheet music to play Bo Diddley songs is beyond me. 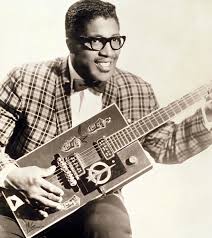 Email ThisBlogThis!Share to TwitterShare to FacebookShare to Pinterest
Labels: Soul/R&B/Mobo