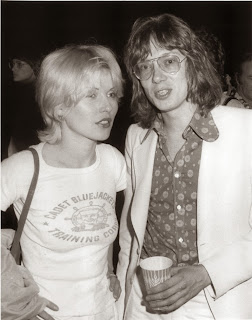 Great story! She was actually pictured in several mags in the late 60s as part of Wind In The Willows, but has steadfastly attempted to sidestep that part of her history...

Blondie were support to Television on their 1st UK tour ,I saw them at Birmingham Odeon and I think it was the first time I saw people coming out of the bar just to look at a support group.

I thought she would have been photographed with WITW. Maybe it would be more accurate to say 'in a British magazine'.

love these stories, thanks!

Club 82 was not ever a "lesbian bar"! Do your homework. It was a mafia owned drag club in the 60s visited by slumming celebrities but turned into a disco in the early 70s and got put on the map when Bowie stopped by. They featured bands like the Stillettos, Wayne and the New York Dolls. The women who ran the club were butch dykes who let all the cute girls in for free, but that was not the clientele. Just sayin'.