Brian was having a massage when we arrived. Unmistakably Brian, big, gaunt, with a helmet of thick grey hair, he was sat at the bottom of the stairs that led to the stage, eyes focused on a point immediately ahead of him, mute, having his shoulders rubbed. We tried not to stare as we walked past towards the artists’ bar. He was still there, still being massaged, still staring straight ahead, when we passed by again on our way to our seats twenty minutes later.
It was an extraordinary evening, and not just for the music. Brian Wilson, genius pop composer and legendary mental casualty, led his 10-piece band of multi-instrumentalists through just about everything and anything anyone wanted to hear from the Beach Boys’ repertoire, including the entire Pet Sounds album performed sequentially. They displayed a deftness of touch that made all past and present versions of the group sound second rate, not least because nine of them, plus Brian, sang. All those intricate harmonies and arrangements were replicated not only with superb technical skill but also with verve and an element of good-natured humour. ’s iconic status was reverently acknowledged when he walked on stage but, sensibly, he’d evidently decided to nip this sort of thing in the bud by opening the proceedings with ‘Brian Wilson’, the Barnaked Ladies tribute song to his transcendental self. Perfect.
But there was something else happening up there. Throughout, Wilson, sat before his large electric keyboard which he may or may not have played, exuded a strange, childlike demeanour that manifested itself in clipped announcements and weird hand gestures, as if he was gripping the steering wheel of a car. I’m sure I wasn’t the only one willing him on, hoping something wouldn’t go horribly wrong, but at the same time morbidly fascinated at seeing Brian Wilson in the flesh. He said things like, ‘Here’s a nice little song’, or ‘Thanks for coming down to the show tonight’, or – introducing ‘California Girls’ – ‘This was a big hit for the Beach Boys in the sixties’ (really!), in a voice that suggested he was reading the lines from an autocue, on remote control, pre-programmed. But he sang well, though it was often difficult to tell exactly who was singing what amid this great choir, and it all sounded wonderful and was fabulous value as they played two sets and upwards of 30 songs, maybe more. I lost count but I knew every single one of them. When the first half was over Brian stood up and marched, robot-like, off stage without so much as a second glance. He did much the same at the end of the second half until, after a slew of encores, he returned and proffered a bow. But if he smiled I never saw it.
Fifteen minutes later Brian was in a room on the fifth floor doing a ‘meet and greet’ attended by the lucky winners of a competition in Mojo magazine. There he was again, wearing the same shirt in which he’d performed, sat at a table, signing autographs, not speaking, not looking too happy, his eyes still focused somewhere only he knew. I was told he was tired. I joined a queue of men – nearly all men – holding vinyl copies of Pet Sounds for Brian sign but all I had was my concert ticket which I proffered when my turn came. “A pleasure to meet you Mr Wilson sir,” I said, as politely as I could while he signed, using a thick black marker pen. “I was hoping you’d have played ‘Don’t Worry Baby’,” I added, smiling, hoping for a reaction. Brian looked at me quizzically and from the expression on his face I knew that I might just as well have asked him to comment on the deteriorating relationship between David Beckham and Alex Ferguson and whether this might impact adversely on Manchester United’s bid to retain the Premiership title for the 2001/2 season. He didn’t reply. “The concert was wonderful,” I said. Still he didn’t reply. Nor did he smile. I guess he was used to compliments. “May I shake your hand?” Brian held up his hand very briefly and touched mine. It was time to move on, as the lady sat next to him indicated by her concerned expression and dismissive hand gesture. As I wandered off it occurred to me that Brian hadn’t been programmed to answer questions like my ‘Don’t Worry Baby’ inquiry, only to accept compliments, and that this kind of spontaneous query was unwelcome. 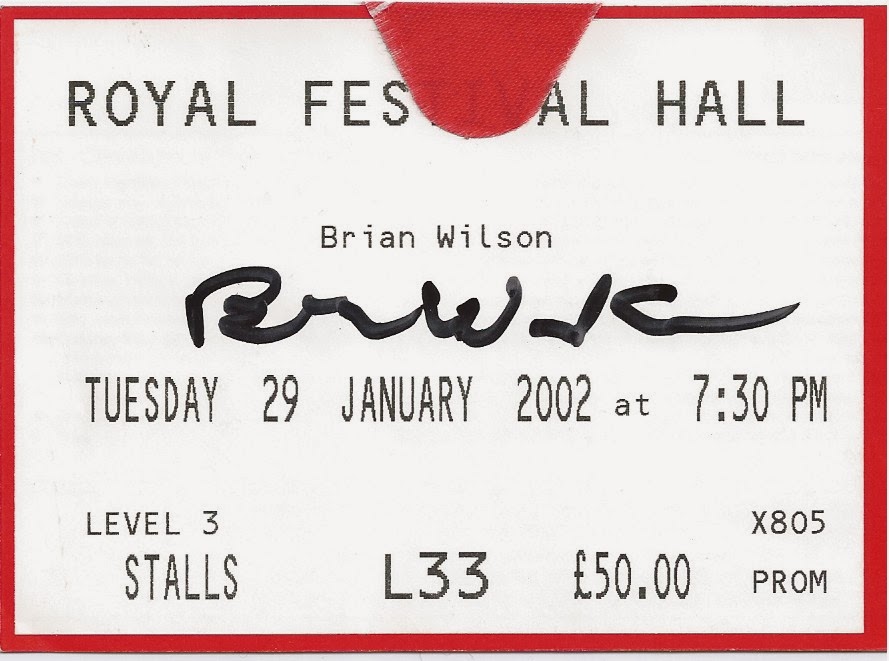 Twenty minutes later, after another drink in the artists’ bar (where Ray Davies was talking to Richard Ashcroft if I remember rightly), we decided to split but the only way out from this backstage area now was via a freight elevator down one floor to the stage door. It was a huge elevator, big enough to accommodate a concert grand piano, and when it stopped at our floor who should be inside, waiting to descend, but Brian with a small entourage. Out of respect we made as if to wait for the lift to return, but were beckoned in. Again, I tried not to stare. Brian was being helped into his anorak, scarf and gloves by the same lady who’d sat next to him at the meet and greet. At the bottom he marched stiffly out and turned, head high, staring ahead, just as he’d left the stage. Outside there was a crowd surrounding his car, held back by security men, and they cheered him mightily, but from the look on his face it occurred to me that he didn’t even know why they were there or why they were making all this noise. He was in his room.