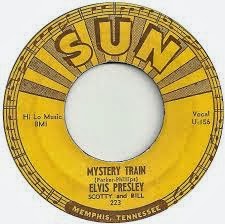 Elvis would have been 79 today.
When I was nine Elvis was my hero, just the coolest man on the planet, and over the next two or three years I spent all my pocket money on his records – ‘Heartbreak Hotel’, ‘All Shook Up’, ‘Blue Suede Shoes’, ‘Hound Dog’, ‘Jailhouse Rock’ – and four of his early albums. I loved him so much that I’d cut out pictures of him from magazines and paste them on to the plain white inner sleeves of the albums. I badgered my mum to take me to see Love Me Tender, Loving You, Jailhouse Rock and King Creole, the first four movies which he never bettered. I joined his fan club and, when he was drafted and posted to Germany, wrote to him in Frankfurt. I got a Christmas card back, ‘signed’ by him and the Colonel.
Like most everyone else, I stopped loving Elvis after he came out of the army. He made a couple of decent albums before the rot set in with Blue Hawaii, after which it went pear-shaped until the Memphis sessions in 1969, a brief hiatus before the slow and painful decline. Of all the many tragedies that attach themselves to the life and career of Elvis Presley none saddens me more than the latter day image of a bloated, bejewelled behemoth in a white jump suit lumbering across stages like a wounded bull waiting for a matador to put him out of his misery.
But it was Elvis that started it for me, so on my way home tonight on the not-so-mysterious SouthWest train I catch from Waterloo every night at six I’ll be listening to my favourite Elvis song once again: ‘Mystery Train’, recorded on July 11, 1955, when Elvis was 20 and young and beautiful (and I was eight). For my money it’s not just the best record he ever made but one of the best anyone has ever made.
“Train ah ride, sixteen coaches long…”
RIP Elvis, the King.
Posted by Chris Charlesworth