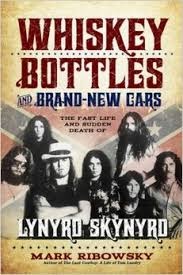 Browsing Amazon last week I came across a Lynyrd Skynyrd biography published last year called Whiskey Bottles and Brand New Cars: The Fast Life and Sudden Death of Lynyrd Skynyrd by Mark Ribowsky. Amazon invited me to ‘look inside’ so I did so and discovered that my name appears in the index with seven page references. I was unable to access these pages but my curiosity got the better of me and I bought it.
My brief but memorable relationship with Lynyrd Skynyrd is detailed in a post elsewhere on Just Backdated. In a nutshell, in 1977 I worked for the company that managed them, Sir Productions, which was headed by my friend and former Who associate Peter Rudge. 1977, of course, was the year in which the group was decimated by a plane crash that killed three members of the band, including singer Ronnie Van Zant, their personal roadie and the two pilots.
Surprisingly, Mark Ribowsky did not get in touch with me about his book which would not have been difficult as I’m hardly the shy and retiring type who’s cut off means of communication. Instead he accessed the story about my experiences with Skynyrd on the website Rock’s Back Pages, which is more or less the same as a post about the group on Just Backdated (but lacks the postscript about my presenting Skynyrd with a Classic Rock award in 2012), and reproduced large sections from it in his book, either directly or as paraphrased material. Ribowsky didn’t ask permission to do this but like most writers I tend to accept that once something is out there on the internet it’s pretty much fair game, though I think he has taken a bit of a liberty in lifting as much material as he has without so much as a by your leave (though I am credited in the bibliography). More seriously, though, he states that in the course of this article I imply that Peter Rudge was “always looking for ways to scrimp and save”, with a veiled suggestion that this parsimony on the part of Rudge may have prompted him to rent a substandard plane on the cheap, the logical inference being that this might explain why it fell out of the sky.
Over the weekend I re-read my Lynyrd Skynyrd article and cannot find any suggestion whatsoever in it that Peter Rudge was a cheapskate. If fact, I don’t believe he was at all. So this supposed ‘testimony’ from me – “according to Chris Charlesworth, Rudge was always...” is what it says in the book – is an outright invention, and I’m not happy about it. Neither am I happy that this invention seeks to indirectly lay the blame for the tragedy – completely erroneously – at the feet of my friend Peter Rudge.
Rudge’s name is not mentioned in the acknowledgements which suggests he didn’t interview him. Neither is mine, of course.
Also, amongst other things that don’t quite ring true, Pete Townshend’s name is spelt wrongly throughout (missing the ‘h’) which always pisses me off and leads me to believe that a writer who makes this elementary error doesn’t know his stuff.
I will complain to the publishers – Chicago Review Press – and hope the complaint reaches Mark Ribowsky. If I get a response I’ll let you know.
Posted by Chris Charlesworth

Am glad to read that your complaint was resolved. I agree that your original posts did not in any way imply that Rudge was looking to cut corners and thereby sacrificed safety.

The problem of lifting wholesale off the Internet is insidious. I am a photographer and I frequently find my work--especially of musicians--heavily Photoshopped with horrid "effects" and credited to others. Or credited to me, and I don't know which is worse.

You did well to act upon this matter and get a resolution/apology.

I know how you feel Chris. My Slade site, From Roots To Boots, has utilised many sources, including your book, which are credited over and over again. Many hours of research, mainly by Chris Selby, have been documented with as much data and graphics as possible.
Our hard work was lifted and used, incorrectly and without a mention, for a professional record release by Secret Records of all people. Had they got in touch we would have provided better graphics and pointed out that the Gered Mankowitz Fontana promo picture was mock. I credited Gered, they didn't bother. Strange old world isn't it? :-(

There is a chance you are eligible for a free $1,000 Amazon Gift Card.

He should do more fact checking for sure. Zakk Wylde would have been all of 9 or 10 when he supposedly witnessed an altercation while playing with Black Sabbath, not to mention he never played with Black Sabbath. Will not be looking at anymore of his books of fiction