THE WHO – Jacksonville, 1976, Playing For The People Who Weren’t There

Elsewhere on Just Backdated I rhapsodise about a Who concert in Jacksonville on August 7, 1976, which just happened to be the last time I saw them perform with Keith on drums, not that I knew that at the time.
This post has been read by many fans, one of whom Mark Starcke, has sent me a substantial cache of photos taken at this show, 167 to be precise, perhaps the largest number of live Who pics ever taken by a single photographer at any one Who show ever. Many of them are fantastic and truly capture the excitement of The Who at this stage in their career.
Sometimes words can’t quite describe the power and exuberance of The Who in full flight, the way the music flowed with their athleticism, the excitement of seeing Pete spinning his arm around and leaping around in time to the music while Roger threw his microphone into the air and Keith knocked ten tons of shit out of his kit while John just stood there holding it all together with his immaculate bass lines. It’s hard to get that across to those who weren’t there, who think they were just another rock band going through the motions.
These 16 selections from Mark’s pictures speak for themselves really. This is what I saw at Jacksonville that night, partly from close to the front, partly from the stage itself, on John’s side of course as it didn’t do to get in the way of Bob Pridden, especially when Pete was yelling at him.
What a fucking lucky bastard I was, and so were all those who were there that night. Pity the poor sods that weren’t there but then again, maybe if it wasn’t for them this night wouldn’t have been as special as it was. 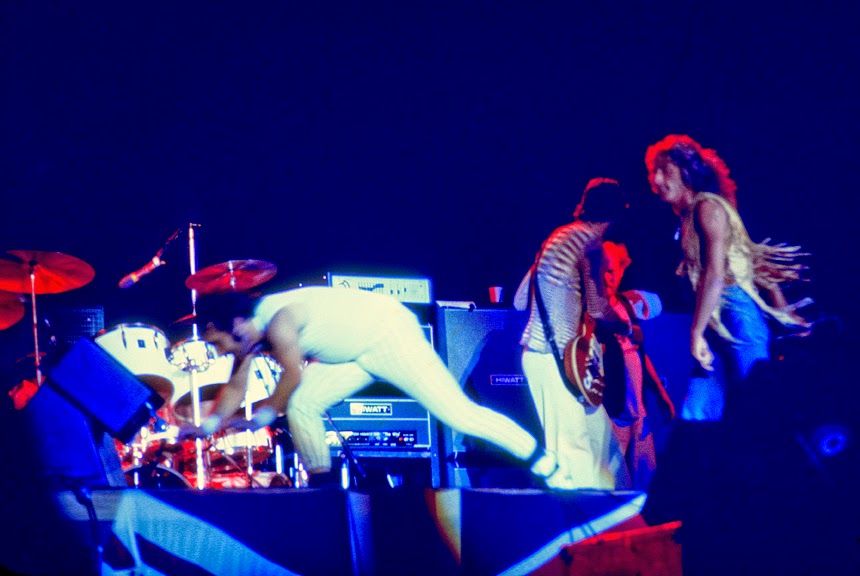 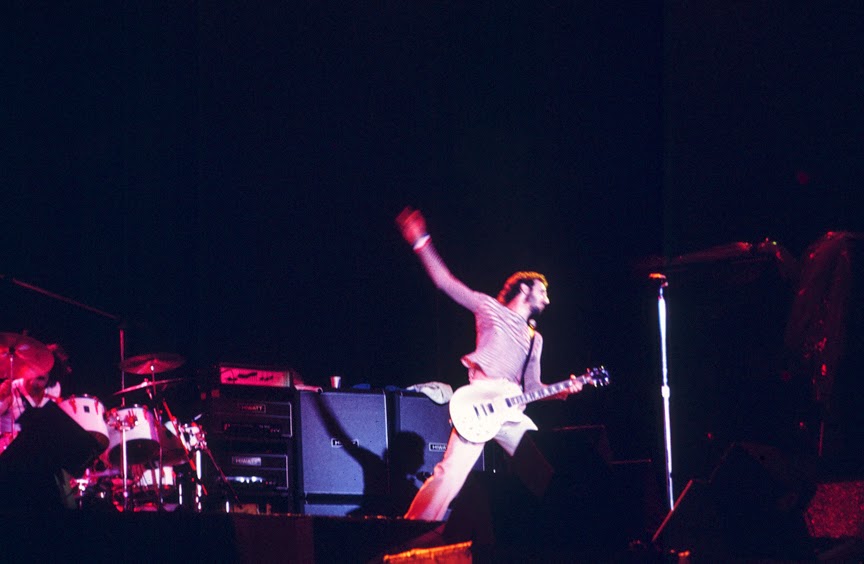 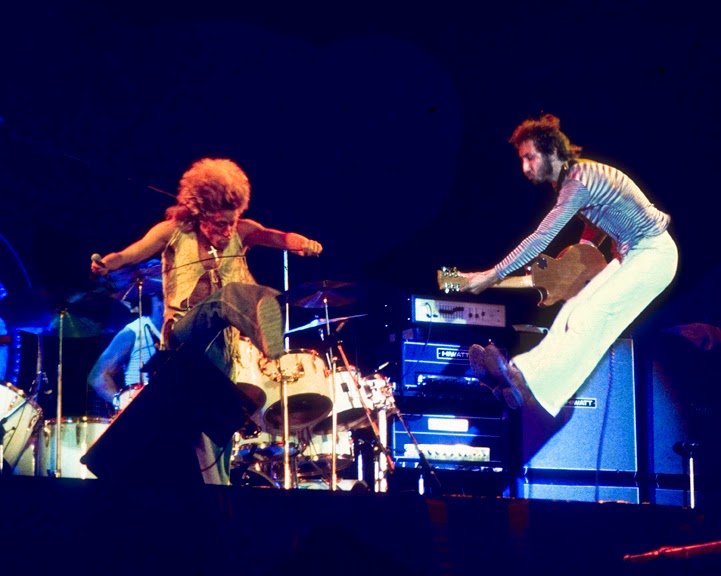 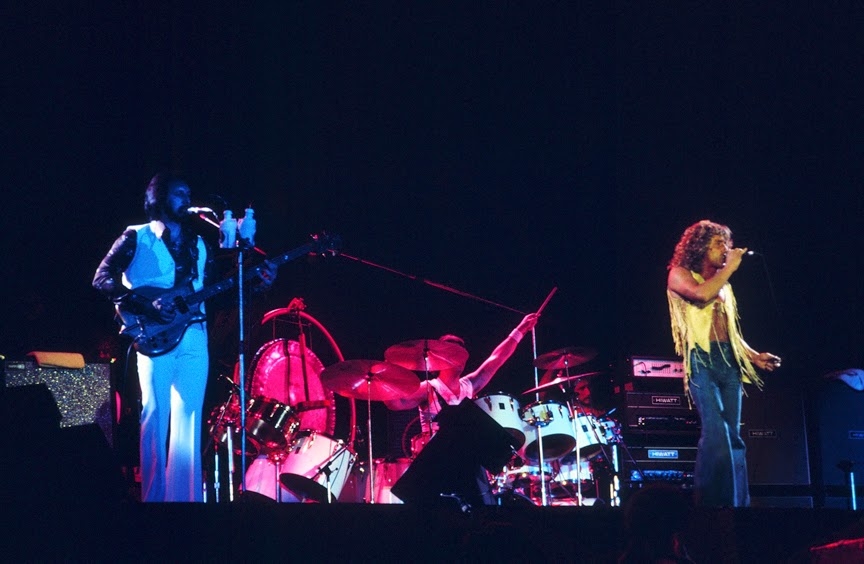 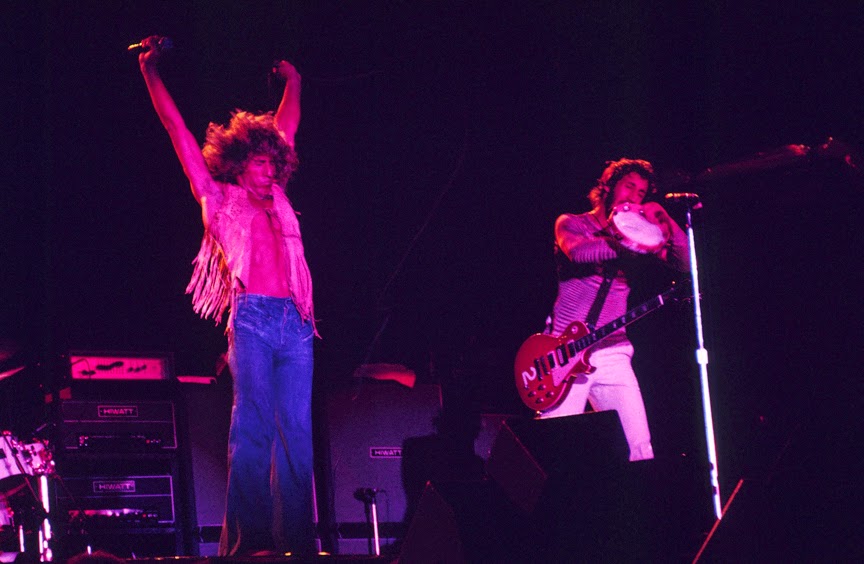 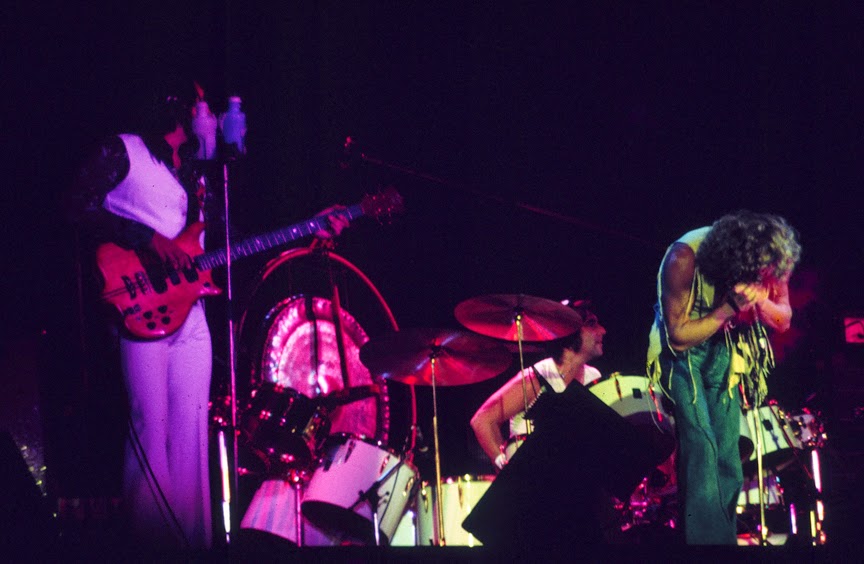 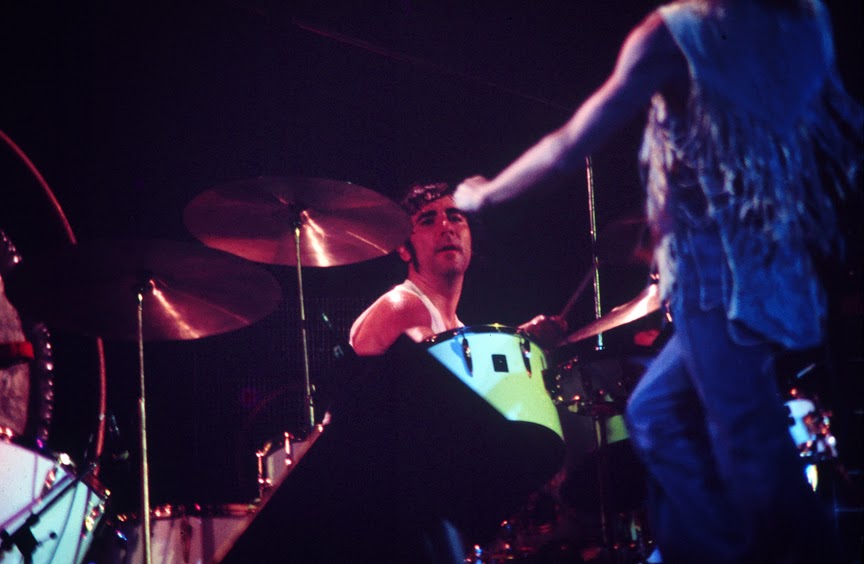 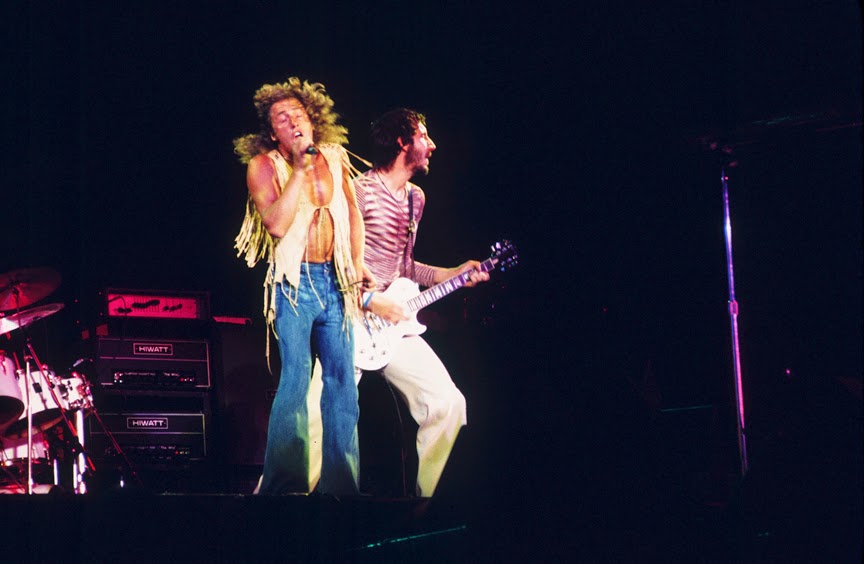 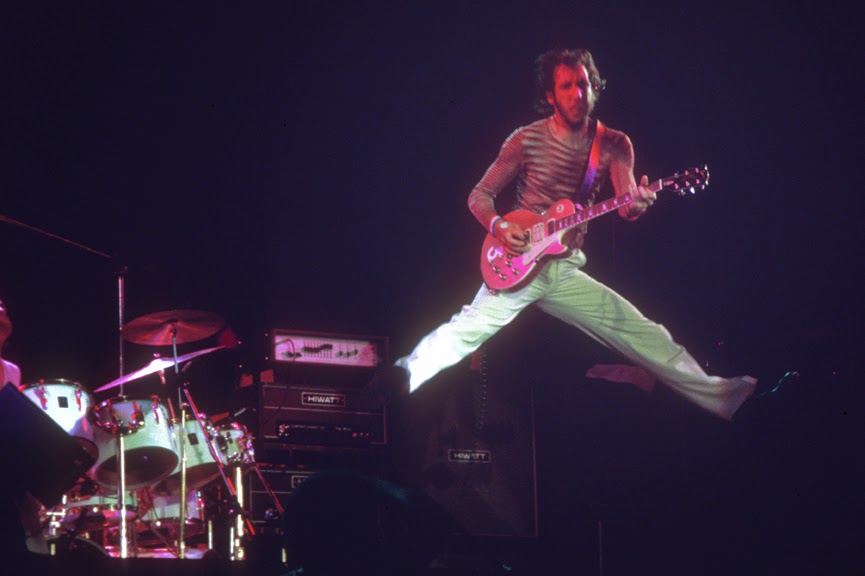 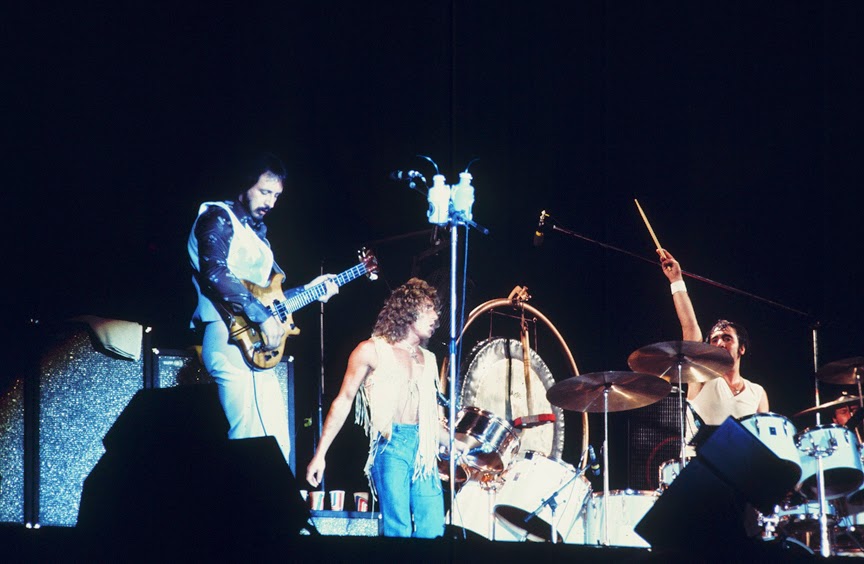 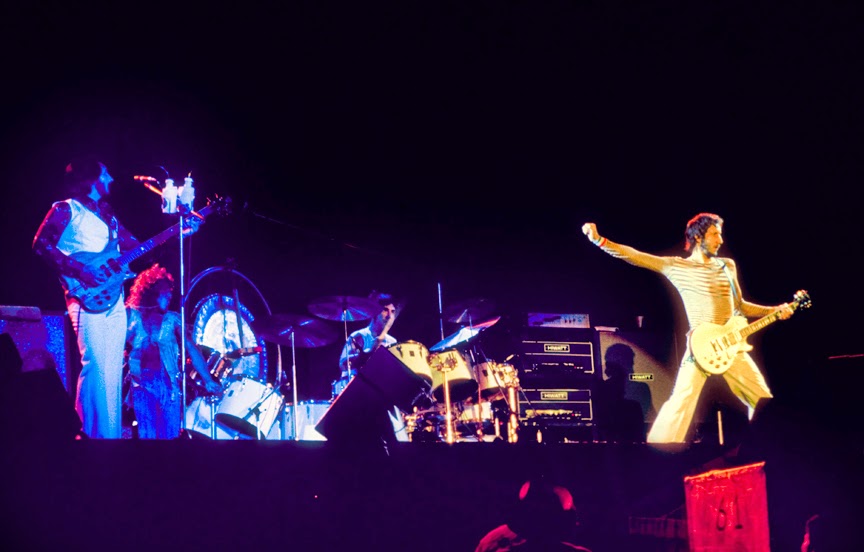 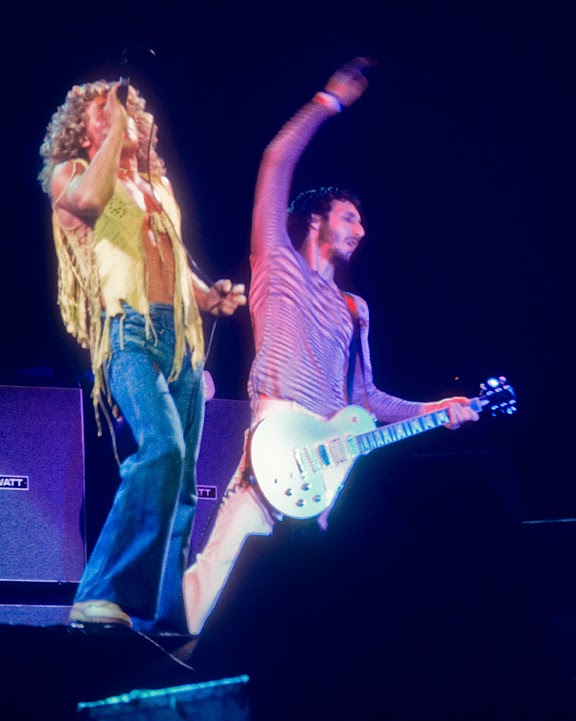 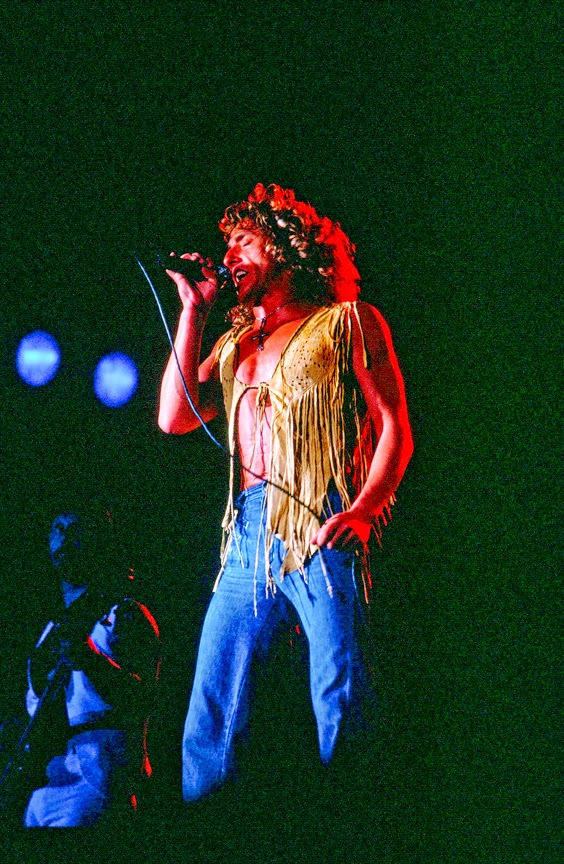 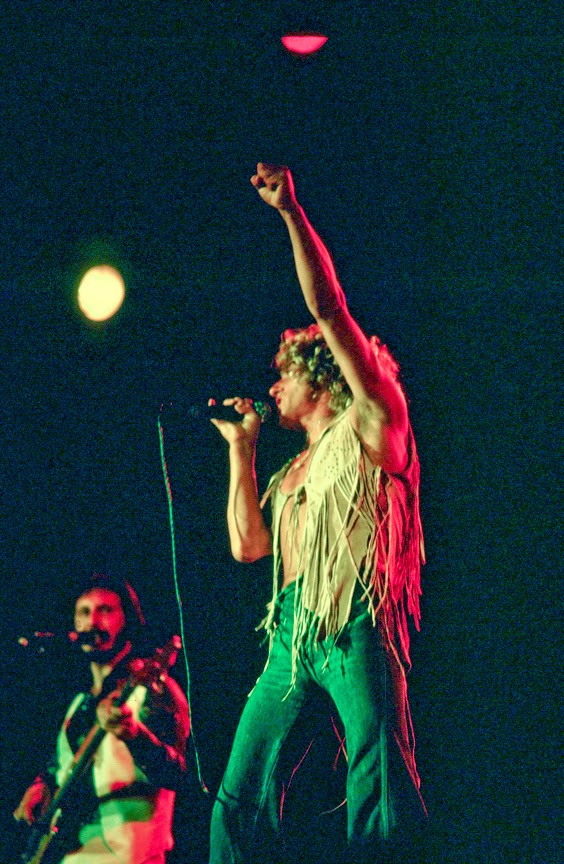 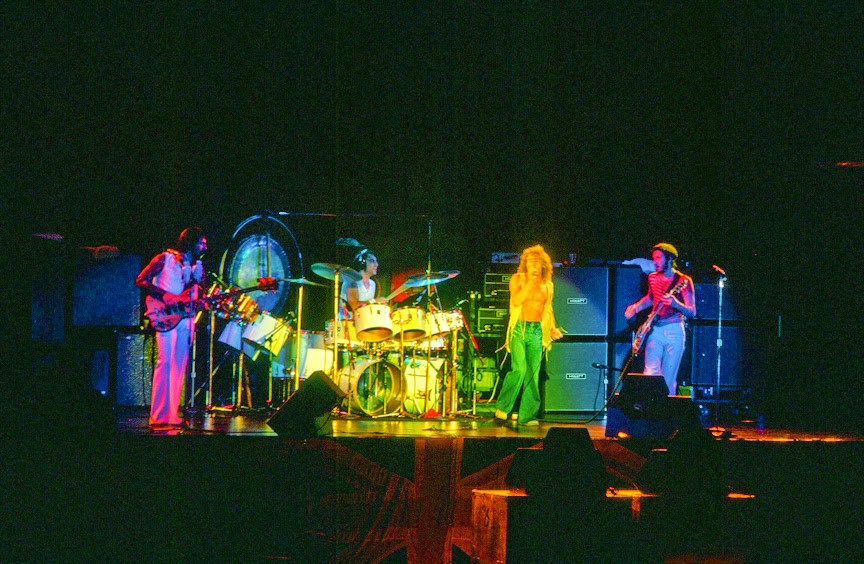 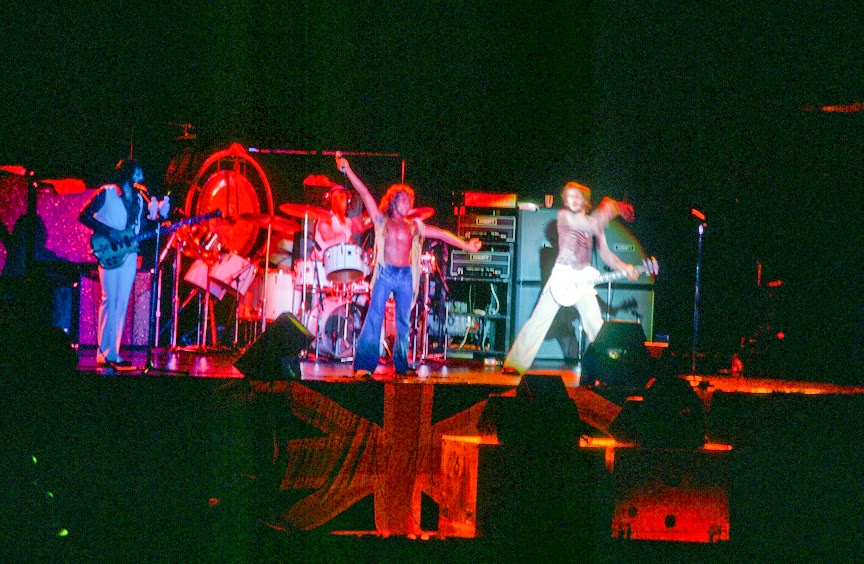 Awesome! Awesome! Thanks for posting!

had the best time that day ,me and my buddy ed elliott drove from atlanta

the pixs posted really bring it all back to me

These are great! I was at the March 9 show at the Boston Garden, when Moon sort of fell over/off his drums and the concert was cancelled after a couple of numbers. (They made it up a few weeks later, but I had an ear infection and could not partake of the usual sonic blast nor of the usual concert high that was the norm for me in that day...)

I was there. I was the 4th person onto the field that morning when they opened the gates, so my friends and I ended up about 6 feet from the front of the stage. Most of those pics above were taken from about the same place that we were standing. I had never seen The Who before, so needless to say I was quite impressed! Spectacular is the only way to describe it. Definitely the greatest show on earth! Read my take on this concert over at Classic Rock Concerts.com. I included a shot of the ticket stub there as well.

I was there, my third and last time seeing The Who. This was two months before my 21st birthday. I had seen them in 1973 at the Omni in Atlanta, (with Jacksonville hometown band Lynyrd Skynyrd opening--they used to play at my high school, but the only time I ever saw them was opening for the Who in 1973), and at the same venue in 1975. (I lived in Florida but traveled to Atlanta each time to see them, as I had high school friends who were in college in Atlanta.)

A friend with me at this show had seen the Rolling Stones at the same venue the year before. She looked at me at one point and said, "They're a lot better than the Stones!" She didn't have to tell me!

I'm pleased to see these mementos of this last time I saw the Who, (mementos of my youth, as well). Is there a place where the entire cache of this photographer's pix from this show may be seen?

I attended that spectacular show. I spent the early morning picking psilocybin mushrooms from a cow field in Manderin, boiled them down in Palm Valley to make a gallon of tea each for my two friends that attended, then headed to the Gator Bowl around noon. The crowd was sparse. Shamefully a good crowd never really turn out to fill up more than the field an maybe half the stadium seats, but it was a not to miss tremendous event nonetheless. The music started with a band call "Law", then Labelle came on stage in really funky space suits. They managed to find a black dude with a broken leg in a cast to come up onstage and dance with them. Black Oak Arkansas put on a rather forgettable performance as night was closing in. Then rumors began circulating that the Who may not play because of the weak turnout.the crowd began to get agitated as the band took a long time to come out and occupy their instruments. Then finally, the lights came on and a crew came out to mop the stage. I remember the received a standing ovation! But not as celebratory as the one when the Who actually walked out.the contrast in the Who's sound from the other acts was uniquely tremendous and LOUD.in fact, I never heard anything that loud since. After "Substitute", Keith Moon, climbed over his rigidly constructed drum kit, walked over to Roger Daultrey and seized his duct-taped microphone,and declared it was wonderful to be in Washington DC. Everything the Who was famous for was done that night with harrowing precision. None of them seemed to miss a note. They were like a huge rocket engine burning onstage. You could smell it in the air. Peter Townshend was diving all over the stage. Daultrey shot his mic several feet in the air and sucked it back in his hand never missing a lyric. Keith played like there was two of him...and John Entwhistle stood like a stone through it all. There were lasers, the first time I ever saw such a thing, and never have I seen lasers so impressive and tight with the act since. The encode was "See Me, Feel Me" from Tommy, that was the most unforgettable moment of any concert I ever saw. Lasers stretching from one end of the Gator Bowl to the other forming a rainbow. We knew it was over when Pete took of his silver Les Paul, dropped it on the stage and exited.(we all thought he was gonna smash it everywhere!) Going back to home to Jacksonville Beach, I felt like a deaf shock patient released into the street...I couldn't hear anything for a week!

I have the entire set of shots. My email is kleinkline@hotmail.com Send a line and I will see what I can do for you.

That was an all day concert at the Gator Bowl and the first outdoor laser lights used in a concert setting. Didn’t leave till about 1 am. What a party

I drove from Columbus Ga. I t was the last concert before I shipped off to navy boot camp. The best $12 worth of entertainment I have ever spent. The show was recorded and is available on cd.

I was there. thanks for sharing this. I hitch hiked from Chicago to Jacksonville for the show. The 10th and last time I would see Keith Moon. Amazing. Met Pete, John and Roger.. got their autographs before the show. Great memories.... again, thanks for sharing. Spider.