ELECTRIC SHOCK: From the Gramophone to the iPhone, 125 Years of Pop Music by Peter Doggett 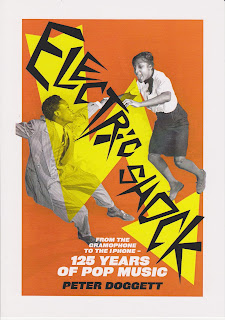 Bill Haley not "Hayley". He did rock n roll in 1952. If you'd told Buddy Rich, Tommy Dorsey's drummer, that he was playing rock n roll he'd not be best pleased.

Thanks for an interesting review. I haven't had time to read Doggett's 720 page magnum opus but am looking forward to it. I can't help wondering whether, from the elegiac tone of your review ("much like shops in moribund city centre") our view of pop music is inevitably part of a baby boomer narrative. (I guess Doggett, you, me are roughly the same generation.) Inevitably pop/rock for us was becoming aware of African-American culture (via blues, R&R), changing social mores of 60s, our first sex & drug adventures. Inevitably the music is soundtrack to societal convulsions of 2nd half of 20th century as well as our own journeys. For our children it can't have the same resonance. A writer I once knew, Dave Downing, wrote an essay about 1965, The Moment of Rock, which he compared to John Berger's essay about 1912, The Moment of Cubism. These were moments in culture where the future seemed to become visible and tangible. And so so the music had huge significance for us for many non-musical reasons. Thanks for an interesting blog.