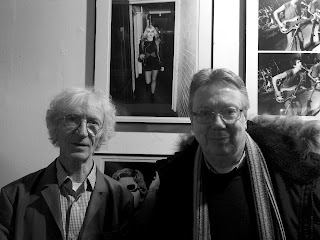 Through his long association with Island Records Adrian Boot is best known for having photographed Bob Marley more prodigiously and with superior results than anyone else, and it is his revered shot of a contemplative Marley that appears on the front cover of Legend, the reggae king’s mega-selling compilation album.

Like Marley, Adrian was also drawn to punk rock, and it is this aspect of his work that is celebrated in 40 Years Of Punk, an exhibition at Camden’s Proud Gallery that opened last night and runs until January 8, 2017. Of course, it’s not really 40 Years OF Punk, more like 40 Years SINCE Punk, but you get the idea. With few exceptions, the pictures were all taken in the decade that followed the arrival of the Sex Pistols in 1975.
Adrian is a slight, pixielike, professorial chap with a mop of unruly hair, nowadays white, that is impervious to the attentions of a comb. Springy of step and nimble of sinew – his partner Lynn is a yoga teacher – he can position himself and his lens at all the right angles to capture his subject. A gift for banter and an inquiring mind that absorbs, analyses and dispenses wisdom means those subjects never become bored. He’s also more often than not one step ahead when it comes to technical innovation, though the pictures at Camden will have been processed the old fashioned, pre-digital way; exposed on 35mm film, almost all of them in monochrome, developed in a tank and printed on paper from an enlarger, at least when he first viewed the images emerging in a developing tray beneath a red light in his darkroom.
Reggae and punk may have been miles apart in terms of rhythmic style but they were closely related as far as political motive – the righteousness of the dispossessed – was concerned. That the punks liked their reggae was most evident on the many Jamaican covers in The Clash’s catalogue, largely the gift of their reggae-loving bassist Paul Simonon. So it follows that Adrian’s cameras focused on The Clash more than any others in the genre, hence the many pictures in the exhibition of Strummer and Co in their customary confrontational poses, looking like they mean business both on stage and off. The Clash really were extraordinarily photogenic without really trying to be, as Adrian, to his immense delight, must have discovered as he followed them around the wastelands of 1970's Notting Hill.
The term ‘iconic’ has become a bit of a cliché these days as far as rock photography is concerned but it really is quite surprising to see so many wonderful shots recognisable from the period because they appeared, and continue to appear, in magazines, on posters and in the never-ending stream of TV documentaries about rock’s past. In particular, there’s a colour shot of Johnny Rotten, taken in 1977, looking like a Fifties Ted in his pale blue jacket and frilly white shirt, his orange hair quiffed up like Gene Vincent. Where have I seen that before, I thought. Well, just about everywhere I guess.
All the usual suspects are present. As well as the Pistols and Clash we have Siouxsie, The Damned, Generation X, The Stranglers, Buzzcocks; their American cousins Ramones, Blondie and Suicide, on stage and on the streets outside CBGBs; later arrivals like the Police, Pretenders, Ian Dury and Adam & The Ants; and 2-Tone pioneers Madness and The Specials. One shot of the latter, taken amidst a wildly skanking crowd, suggests that although Adrian was slight of build he didn’t lack courage. Debbie Harry invariably looks gorgeous, of course, which implies Adrian might have succeeded in the fashion world too but, knowing him as I do, its superficiality was unlikely to suit his inquisitive temperament. As it happens he’s more lately moved on to travel photography, his speciality the Indian subcontinent where he and Lynn visit regularly and where he learned to play the sitar.
But I digress. The exhibition leaves no doubt in the mind that Adrian was the very opposite of indolent; everywhere and anywhere, night and day, during punk’s angry outburst. The pictures in his exhibition capture the furious aggression of the best of these bands at work, and their surly countenance off stage too, and a glance at his online archive  (www.urbanimage.tv) indicates that they represent only a tiny fraction of what he got up to. The only flaw in the show that a pedant like me detected was a lack of precision in some of the captions: shots of The Pretenders dated 1988 feature James Honeyman-Scott and Pete Farndon, who died in 1982 and ’83 respectively, and a shot of Dury & ‘The Blockheads’ is actually an early line up of Kilburn & The High Roads.
Finally, the pictures are for sale, framed or unframed, and I wasn't alone in noticing that the prices are considerably more reasonable than at most of these rock photo exhibitions. Good job Adrian, old mate.