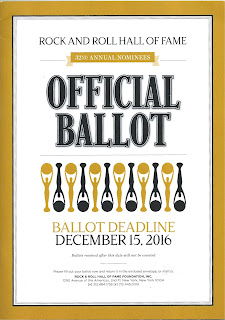 Chic and Kraftwerk certainly deserving. Not necessarily "my thing" but a huge and positive influence on others who are. (Bowie for one). Otherwise, Looks like everyone's gonna be nominated in the end until everyone gets one.

Yes, sooner or later it'll be standing room only. I suspect J Geils are a certainly because they know (or are admired by) the right people.

Chic & Kraftwerk are head and shoulders above the rest for me. I'd say Chaka Khan too but that one seems to be lost already

Hmmm sadly it looks like we are getting to the bottom of the barrel now that most of the big acts have been pretty much inducted by the Hall. My picks would be:

Do yourself a favour and buy a Joe Tex compilation, read this http://sirshambling.com/articles/joe_tex/index.php then vote for him.

I'll ask this every year until he's in: why hasn't Nicky Hopkins been inducted as a crucial sideman?

Thank you, I have ordered an Anthology album and may revise my voting. CC

Yes should have been in at the very beginning. Never understood the prejudice against them.

OK it's not yet midnight here:
Use the TERM "Rock n' Roll" and NOT include J. Geils is a crime.
J Geils is the only thing close to "real" RnR

except perhaps Zombies (before my time though) an Joe Tex w/ whom I'm likewise not familiar but could there be some REASON? I like very much Yes, Rick Wakeman &tc but ELP more - and both those are PREFIXED by "art" or "prog" but I guess we live in times where language matters not ... plus I'm totally ignorant of how HOF works Lol!
Glad Tidings & FANTASTIC blog BTW

apologies for the ex post facto remark - steppenwolf was another legitimate act if LIMITED in grooves to "magic carpet ride" & ? as pointed out, at least it DOES have a groove ... and MC5 - likewise just don't know anything about ... but the day janet jackson is a rnr HOFer is when subscription gets canceled

Listen To 2Pac - My Military