THE BEATLES: LIVE AT THE HOLLYWOOD BOWL 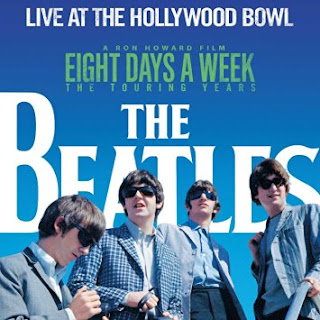 To accompany the film Eight Days A Week: The Touring Years, Apple Records, now part of Universal Music, has re-released as a CD the LP The Beatles Live At The Hollywood Bowl, until now available only on vinyl. Originally released in 1977, it didn’t stay around long, though it was reissued on EMI’s downmarket MFP label around 1980, then allowed to slip out of print, probably because after the death of John, who approved it, the others weren’t so keen.
I liked it a lot, however, if for no other reason than that it was a cherished memento of the social revolution we call Beatlemania, and I still have my vinyl copy. Oddly, this edition is still available on Amazon, reasonably priced (used, at around the £15 mark) and outrageously priced (£500 mint). My copy has got a hole punched in the top right hand corner of the sleeve, which indicates it’s a promo copy; this tallies with it being not on Parlophone but on the Capitol label, ie the US version, as in 1977 I was living in New York. 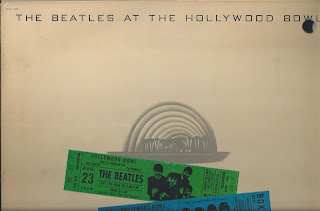 My original Hollywood Bowl album with the hole punched out.

I never understood why, of all the songs they could have chosen, they did "Baby's In Black", through to their last concert.

At the end of the 1964 show, before closing with Long Tall Sally, Paul (master of ceremonies as always) clearly says to the crowd:

"Thankyou very much, ta. Well, this next song will have to be our last one for this evening (audience screams). Oh yes, sorry, but, er, contrary to public opinion we've never done any longer than this, so..."

That's how I remember the Beatles. Cynical around the edges at all times. This ghostly pale Saint John who turned up in 1980, and the sanitized Anthology of 1995 are not something I recognize from my teen years of 1963 to 1969.

The Beatles Family tend to present themselves as the Windsors. Perhaps one can't blame them, it’s one hell of a BRand. And it's sure to go on being protected as such via Stella in particular.

However, it's little wonder I hear them referred to more and more these days as "the first boy band", by entrepreneurs like Louis Walsh attempting to give their own dubious careers more credibility. Ridiculous.

P.S. fans might well want to get their hands on the OxTango Music Productions 2014 double album release of "Live at the Star Club". Much improved sound, correct sequencing, extra tracks. Well worth a listen.

Thanks Ian. My "Shea" bootleg has the speech from McCartney. I'll check out that improved Star Club record. Whatever else, this new CD does sound better and managed to capture some of the magic of Beatlemania.