More Beatles. I was asked to review this just-published book for the Beatles UK Fan Club magazine. 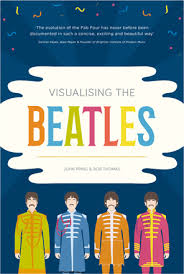 During 33 years as Editor-in-Chief at Omnibus Press a month rarely went by when I didn’t receive a proposal for a book about The Beatles, their authors gamely trying to find some new angle to interest readers. They ranged from the extreme (Why I Hate The Beatles) to the tangential (The Jimmy Nichol Story) to the unpublishable (deathly dull academic music studies). There were a few exceptional books (Graeme Thomson’s biography of George, diary style books by Keith Badman and the Beatles Monthly photo book) but far more were rejected than accepted.

Pitched into this crowded market now we have Visualising The Beatles (Orphan Publishing, large format, paperback, £25) by John Spring & Rob Thomas, graphic designers with a distinguished record in this line of work who have used their skills to create an original and highly attractive info-graphic book about our heroes, 250 pages of charts, tables and diagrams that are beautiful to look at but don’t really tell us much we don’t already know. Still, ‘we’ are probably not the market they are seeking. The fresh, computerised, techno-age feel of the book, its easy-on-the-eye pastel colours, its exclusive focus on facts and the all round clarity in which the data is presented seems to be aimed at those with short attention spans who don’t want to get bogged down in details or theory; probably on-the-go millennials, the generation that – almost fifty years after Pepper – might reasonably be asking what all the fuss was about all those years ago. Visualising The Beatles answers their question.
After a few introductionary pages about Liverpool and Hamburg, the book is arranged chronologically, album by album, with the various facts and figures illustrated by charts, most pertaining to a particular LP. The categories are pretty much the same for each – covers vs originals (until they wrote the lot), who wrote and sang what, track lengths, song keys, success (chart positions of individual tracks released as singles), volume and intensity (which is a bit difficult to follow as these strange circular diagrams do not specify what track is being measured), instruments played, performances (gigging years only) and style (how JPG&R dressed and wore their hair). Preceded by appropriate news timelines from the real world, this pattern is followed all the way from Please Please Me to Let It Be with a few diversions here and there to accommodate exceptional events like occupying the top five places in Billboard in 1964, their movies, the Apple rooftop concert and Paul’s mysterious death.
I was especially taken with the ‘who wrote what’ graphics that demonstrate precisely the ebb and flow of compositional work undertaken by John and Paul, and to a lesser extent George. These little diagrams confirm how the two principal songwriters in The Beatles grew apart, most dramatically on the ‘White’ album wherein the first disc’s 17 songs were all individual efforts, with only three joint compositions (one of them ‘Revolution 9’ to which George and Ringo but not Paul contributed) out of 13 on the second disc. Some, but not all, of the albums have those most common word charts, with the most frequent in big letters, ‘Love’ invariably taking pride of place. Also, the ‘what they looked like’ graphic Beatles are incredibly cute in their collarless jackets, through Pepper uniforms and finally the Abbey Road zebra crossing look.
With its focus on statistics, the book certainly brings home the vast scale of the Beatles’ achievements. I long ago grew tired of dim-witted tabloid journalists comparing the success of the latest boy band to The Beatles or even, heaven forbid, suggesting they might be “bigger than The Beatles”. This is complete rubbish, of course, because becoming “bigger than The Beatles” is simply unattainable in the modern era. The Beatles’ achievements, as detailed herein, are easy to digest and will forever remain unique because the music industry is a vastly different animal in 2016 than it was when The Beatles were active.
That said, the book is not without its flaws. In covering the albums in the way that they do, a number of important non-album hit singles (‘She Loves You’, ‘I Want To Hold Your Hand’ and ‘Hey Jude’ among them) are ignored. It would have been nice for these songs to have been included somehow and given the ‘who wrote and sang what’ treatment alongside all the album tracks. Towards the very end of the book, across a two-page spread, there’s an alphabetical list of all those artists who have covered Beatles songs, hundreds of them in ten columns in the tiniest type imaginable, white on red, a worthy but (in view of its illegibility) rather futile inclusion I thought. Also, for a book that is chock full of illustrations it’s odd to note that it contains only two actual photographs of the four Beatles together, and just six individual shots, and all eight are no bigger than the removable centrepiece on a 7” single. In the context of this book, this doesn’t matter all that much but I can’t help thinking that it was a way of keeping the photo budget as tight as possible.
There’s a lot of blank space within its pages but that’s a style issue and Visualising The Beatles is among the most stylish Beatles books ever. Indeed, it’s a classic from a graphic design standpoint and I can see it winning prizes for this alone. Highly recommended for Beatle beginners and those into state-of-the-art book design; nice to have but not essential for experienced Beatle hands.
Posted by Chris Charlesworth

Hello there,
unfortunately I can't find a "contact" link on your blog, might just be me or early morning blindness. Anyway, my name is David, I'm a Vienna-based Austrian radio journalist currently researching for an upcoming radio feature on, broadly, "the beatles in '67" - could you get in touch with me at david.baldinger@orf.at? I really would appreciate it. Thank you. Best from Vienna, David