In between other projects last year I helped Richard Macphail, school friend, aide-de-camp and tour manager of Genesis and, later, Peter Gabriel, to write his autobiography. For almost five years Richard was the glue that held Genesis together, and in his affectionate memoir My Book Of Genesis he tells his own unique story of the group’s early years.
Richard was the singer in Anon, the Charterhouse school group that included Mike Rutherford and Anthony Phillips, which would merge with Peter Gabriel and Tony Banks’ group The Garden Wall to become Genesis. Recognising their needs, Richard became their one-man road crew, shepherding them from gig to gig, providing a cottage where they could live and rehearse and offering much-needed support when it was most needed.
As Neil Aspinall was to The Beatles and Ian Stewart to The Rolling Stones, Richard became the nearest thing to a sixth member of Genesis, and although he went his own way in the eighties, carving out a successful career in the alternative energy sector, Peter, Mike and Tony, together with later arrivals Phil Collins and Steve Hackett, were never far away. Though it dwells on the group’s early years when they were finding their place in the hierarchy of prog rock, My Book Of Genesis is in reality the touching story of a close and valued friendship that has endured for over 50 years.
In this first extract we join the earliest line-up of Genesis in the summer of 1970. After a shaky start involving an album now largely forgotten that was produced by Jonathan King, the group has signed to Charisma Records, recorded their second album and now face an endless series of small-time gigs. Then comes a bombshell. 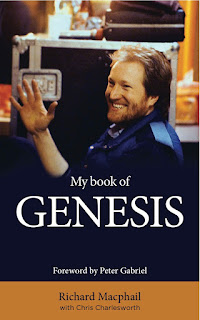 Trespass was due to be released in the autumn and lots of gigs were coming up, including the early ones at Friars, but another problem was looming, a massive problem known only to the inner circle. Ant [guitarist Anthony Phillips] had developed the most incredible stage fright and was really struggling with it. He talked about having had an out of body experience on stage it was so bad. We’d played a college in Hackney one night with an audience of around 25 people but he was terrified out of his mind, so terrified in fact that that he developed glandular fever. So the stage fright was making him ill. It affected his ability to play too. He didn’t have an actual breakdown but he was close to it. He told Peter he just couldn’t go on, and Peter called a band meeting to tell us.
The meeting took place one night after we’d played at the Marquee, in the van parked at the back of the club in the spot where you loaded the gear. We’d done our set and when the other band came on Peter told us we had to go sit in the van and have a meeting. That’s when he announced that Ant was leaving. Of course I knew Ant was struggling but Trespass wouldn’t have been anything like the album it was without him. So there was me, Peter [Gabriel], Tony [Banks] and Mike [Rutherford] in the back of the van, no [drummer] John Mayhew which was significant. Everyone was in shock when Peter told us. What are we going to do next? The three of them were actually for giving up. They thought they couldn’t do it without Ant but I wasn’t having it. I said, ‘For God’s sake, we’ve come this far, you can’t give up now. It’s too good. You have to go on.’
‘When Ant left the group I thought, “That’s going to be it”,’ remembers Tony. ‘I thought that because Ant was Richard’s closest friend in the group that he would go too. Obviously we were quite dependent on Richard. I thought that Ant was the most dominant person in the group, the leader in a way. He was the one that made us do it. Peter and I would never have done it, and Mike followed Ant. So I thought that’s probably it. I remember a conversation with Peter and Mike and Richard and you were saying, “You really must keep going.” And I thought that if you were saying that, as Ant’s friend, that made a big difference to me. Peter and Mike… we weren’t sure and we talked together, and then decided, “Yes, let’s find a replacement” and we know how difficult that was but we did it.’
I like to think that I persuaded them not to give up that night but it was Tony, the voice of reason, whose argument carried the day. He was the last one to speak. ‘All right,’ he said. ‘We’ll go on but we have to get a new drummer.’
Tony recalls this crucial decision as if it happened yesterday. ‘We had to get a good drummer and I think we all agreed with that,’ he says. ‘That was a very important thing to me because I felt that we needed a drummer who was creative and someone that we didn’t have to tell him what to do. In fact, finding a drummer turned out to be a lot easier than finding a guitarist.’
Many years later, in an acceptance speech when he won a Prog Rock God Award in 2015, Tony mentioned this in his acceptance speech, saying that without my encouragement they might well not have gone on after Ant left. He never actually said it to me personally but suddenly there we were at this awards show and he remembered that incident after all that had passed between us all.
I think we all knew deep down inside that John Mayhew just wasn’t up to it but only Tony was prepared to say it out loud. Tony is a very smart guy and he saw past the problem with Ant and realised it was an opportunity to get a better drummer. If they were going to make one change they might as well make two was his thinking, and quite right he was too. So the decision was made. We climbed out of the van and went back into the club, me to get the gear to load into the van, Peter, Mike and Tony to give John Mayhew the news. The problems were solved, or so we hoped.
A day or two later we told the people at Charisma that Ant was leaving the band and that we were also going to get another drummer. They were worried but mightily relieved we weren’t going to split up. Trespass had been recorded and was about to come out, and they wouldn’t have wanted to release an album by a non-existent band. I don’t know how much we owed them by then – a few thousand quid maybe as they’d picked up the studio costs and, like the wages they paid, it was all an advance against future royalties. (I do remember we were in the hole to the tune of £300,000 by the time of Foxtrot, the third Charisma album, came out.)

The book can be ordered here: www.mybookofgenesis.com
Posted by Chris Charlesworth

Chris - thanks for posting- any chance you know how to get the book to the states. The web site seems to be U.K. And Europe only.

Richard tells me that the best way to get it in the US is to ask a friend in the UK or elsewhere in Europe to buy it and send it to you. He hopes to get a US deal eventually but doesn't want to jeopardise his chances by putting it on Amazon US, at least for the time bing.

We should talk about this, for NA distribution. I have not done books, but have a new venture brewing that this might work/fit...I thought Steve might post tot his eStore?? For now I will reach out to my Son, who will be in London in 3-weeks from via a Central American tour.

We can work our contact info if he wants to chat...