JOHN ENTWISTLE: “AN OAK TREE IN THE MIDDLE OF A TORNADO”

I wrote this appreciation of John for Bass Guitar magazine last month and although I posted an extract on my blog on May 1 I was asked by the its editor not to post the whole thing until late June in case it impacted on sales of the magazine. 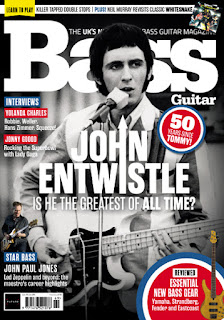 In the third week of December, 1972, I visited John at his semi-detached house in the west London suburb of Ealing, ostensibly to interview him for Melody Maker about his second solo album Whistle Rhymes. By this time I had edged myself into the role of MM’s unofficial ‘Who correspondent’ and charmed my way backstage at several concerts, so I knew him reasonably well. He was a friendly, down-to-earth man, dry of wit yet quite softly-spoken and reserved when he wasn’t performing, and he took compliments like a pinch of salt, wryly amused by his reputation as a disciple of the macabre; “big bad black Johnny Twinkle,” as Moon once yelled on stage, to which Townshend added, “with the flying fingers”.
John and his wife Alison welcomed me into their home. It was the kind of house you might expect a moderately successful and well-travelled businessman to occupy with his family, comfortable but not ostentatious, perfect for the character in The Kinks’ song ‘Well Respected Man’. Some wags within the Who camp were suggesting John should run for Mayor of Ealing.
The house was full of curios: “part museum, part instrument store, part studio and part home,” I wrote in MM. He had just bought a table lamp with those swishy frond-like tentacles that lit up at the ends and I’d never seen one before. Nowadays they’re a bit kitsch but I was fascinated by it. Even more impressive was the first video recorder I’d ever seen, a contraption the size of the average micro-wave with lots of knobs and cassettes like cigar boxes. John demonstrated it for me, and then took me upstairs to admire his collection of guitars and basses. Outside of a music shop, I’d never seen so many guitars in one place. He told me he had 32, which was nothing compared to the number he would eventually amass.
In 1975, flush with funds accrued from the Who’s US success, John and Alison moved to a preposterously large mansion on the southern outskirts of Stow-on-the-Wold in Gloucestershire, about 85 miles west of London. Approached by a winding drive through trees and shrubbery, Quarwood was a gothic Victorian hunting lodge completed in 1859, with 42 acres of land, seven cottages and 55 rooms, its cantilevered staircase leading to a gallery where gold and platinum records were displayed floor to ceiling. Many of the bedrooms housed John’s instrument collection which, in the fullness of time, would grow into one of the largest guitar collections belonging to any rock musician. Another was given over to his electric train set. Medieval suits of armour stood in the hallway where, dangling from a noose, was a stuffed effigy of Quasimodo eyeing the skeleton that reclined in an armchair.
Unlike the semi in Ealing, it was the epitome of rock star indulgence and although it seemed to me as it if it was permanently in need of a coat of a paint and a bit of building work, the master of the house was as proud of his chattels as any 18th Century Lord of the Manor. “My father loved the house and Stow,” says John’s son Christopher, who put the house and most of its contents on the market after his father’s death. “Everyone knew him there but they gave him plenty of privacy and he was never bothered by anyone.”
About 90 of John’s bass guitars, among them several instruments that he had played onstage with The Who, were sold in 2003 at Sotheby’s Auction Room in South Kensington, along with a similar number of guitars and many brass instruments. The sale, which also included Who memorabilia, stage clothes, antique chandlery and casts of game fish, raised about a million quid.
Watching the auctioneer’s hammer come down alongside me were grieving fans eager to bid for a little piece of John Entwistle. In the last decade of his life they had seen him performing not only with The Who but also with bands of his own, and the lack of renown he’d suffered in the early part of his career was now a thing on the past. These loyal fans deeply appreciated not just John’s immense skills as a musician but the touching allegiance he had always shown towards them. Within the Who fan community it had become well known that after both his own and Who shows, John would often remain behind to socialise, happy to answer questions about his equipment, his playing style and The Who, and sign autographs for one and all. I cannot think of any other rock star of his stature who was more gracious to fans, the lifeblood of the music industry after all, than John, nor fans who appreciated this princely attitude so much.
The last time I spoke to John was backstage at Wembley Arena after a Who show on November 15, 2000. The hospitality area was crowded with men and women far younger than me or the group and there was no sign of Townshend or Daltrey but, as ever, John was in the midst of the throng. Grey-haired and looking older than his 56 years, he was slightly tipsy I think, and when he saw me he offered a warm smile of recognition.
“I don’t know a soul here apart from you,” I said to him.
“Neither do I,” he replied, laughing.

Thanks to the miracle of modern technology it is now possible for fans to hear John’s bass lines isolated from the vocals, guitar and drums, at least on two Who’s Next songs, ‘Won’t Get Fooled Again’ and ‘Baba O’Riley’, and watch him as he does it. These extraordinary clips, made available for the first time on a bonus disc with the 2004 reissue of the Who documentary film The Kids Are Alright, can now be found on the internet and have, at the time of writing, attracted 1,890,184 views for ‘WGFA’ and 479,209 for ‘Baba O’. John’s now famous solos in The Who’s ‘Dreaming From The Waist’ and ‘5.15’ can also be viewed, as can bassists who demonstrate John’s techniques.
Finally, a full length biography of John is due to be published by Constable in October. Written by Paul Rees, a former editor of Q and Kerrang!, The Ox: The Last of the Great Rock Stars: The Authorised Biography of John Entwistle is sanctioned by John’s estate and features contributions from Alison and Christopher, his cousin and stepbrother, and John’s second wife, Maxene, along with many from the Who camp, including manager Bill Curbishley and Who soundman Bob Pridden who operated John’s studio at Quarwood. Rees also had full access to John’s archives, including several chapters of an unpublished autobiography that John had completed.
About time too.
Posted by Chris Charlesworth