From time to time at Omnibus Press I was called upon to paraphrase lyrics in order to avoid the scrutiny of lawyers who might use their inclusion as grounds to sue us for breach of copyright and injunct a book.
By paraphrase I mean re-render the lyrics in an indirect fashion so as to convey their meaning without using the actual words. For example, if I was to paraphrase the opening verse of ‘Yesterday’ I might write something along the lines of: ‘The singer expresses his disappointment at the recent breakdown of a relationship, rueing that only the previous day all seemed to be well, but that a fresh, unexplained turn of events had brought with it problems that once seemed remote. The song centres on a nostalgic yearning for a more contented past.’
Or in, say, ‘My Generation’, ‘The lyrics deal with the generation gap wherein the singer muses on how his elders seek to undermine him, and expresses the desire that they ignore him and his peers. Appalled at the thought that one day he would become an elder himself, the singer articulates a wish to die first.’
In 2004 Omnibus Press was scheduled to put out a Red Hot Chili Peppers biography called Fornication by the Australian writer Jeff Apter, but we became aware that soon after its publication Scar Tissue, a book by the Peppers’ lead singer Anthony Kiedis, would also be published. Sensing a legal challenge to our book since it might impact on the sales of Scar Tissue, our lawyers impressed upon me the need to make sure nothing in Fornication would present Kiedis’ legal team with an opportunity to stir up trouble. 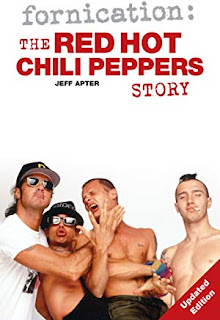 Now you don’t need me to tell you that Anthony Kiedis has led a far from blameless life. It’s no secret he’s chanced his arm with hard drugs and dated models half his age, so cleaning up the book to avoid mention of these indiscretions would neuter it to such a degree as to make it pointless. Nevertheless I did some cosmetic work on it, even though I was pretty sure that when Scar Tissue came out Kiedis wouldn’t hold back on covering these aspects of his life in gory detail, as was indeed the case. In this respect our book was mild by comparison. I recall asking our lawyers whether, if we were sued by someone who claimed that what we published was a (gratuitous) lie, only for that someone to subsequently publish a book in which they admitted it to be true, then what? They’d have to give back any award plus costs, I was told.
I also turned my attention to any lyrics that appeared in the first draft of Fornication. Here we were on shakier ground, insofar as copyright infringement is more cut and dried than libel which can be subjective, so I went through the book and paraphrased any lyrics that I could. One such lyric included the line – and I think it was an improvised rap in concert – ‘Suck my cock’. Feeling duty bound, and slightly amused by the prospect, I decided to paraphrase this as, ‘In the course of the song the singer boldly proposes that his partner fellate him but whether or not the request was granted is left unresolved.’ Jeff Apter thought this was hilarious. So did I. And I think Anthony K would too.