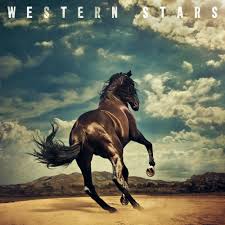 For much of his career Bruce Springsteen alternated between albums he hoped would please his fans and those that were more introspective or experimental. The triumphant, escapist Born To Run was followed by the edgy Darkness, the sprawling River by the brooding Nebraska, the glory days of Born In The USA by the heart tugging Tunnel Of Love, the double punch of Human Touch and Lucky Town with the emptiness of Tom Joad. But if Nebraska and Joad sought to address injustice, Western Stars is more in line, both musically and lyrically, with Tunnel, an album wherein love is glimpsed but unattained, and the emptiness of those for whom the American dream is a myth stretches out like an endless highway that leads to nowhere.
Which is not to say I’m not enjoying this album immensely. Western Stars has been on heavy rotation in my car since Friday and on the docking speaker in our house during meals, both cooking and eating, and this led to me playing other Springsteen albums for comparison, specifically Tunnel and some favourite, more heartfelt, tracks from elsewhere – ‘Racing In The Street’, ‘The River’ and ‘Highway Patrolman’ among them. It’s easy to get the Bruce bug back when a new album comes along.
Barring the folk-inspired Seeger sessions, Western Stars sounds very different from all his other albums. The pile-driving sound of the E Street Band is absent, replaced by lush strings, keening lap steel and a hint of zydeco accordion on at least one track. Comparisons have been made with the dramatic fictions of Jimmy Webb songs like ‘Wichita Lineman’ and ‘By The Time I Get To Phoenix’, recorded by Glen Campbell, or even Harry Nilsson’s superior Fred Neil cover ‘Everybody’s Talkin’’, but to me Western Stars leans more towards old cowboy movies made by John Ford and Sergio Leone, films where the landscape of the wild west is as important as stars like John Wayne and Clint Eastwood, but with an added dash of Robert Mitchum-style film noir to increase the lonesome quotient.
The mood is established from the outset. On ‘Hitch Hikin’’ we find Springsteen doing just that, not entirely happy with his lot and seemingly not too concerned about his destination, discarding maps for the ‘weather and the wind’, and the same theme carries over to ‘The Wayfarer’, with Springsteen ‘drifting from town to town’, unable to settle. Although ‘Hitch’ begins sparingly, with a discordant banjo adding unsettlingly to the mix, by the midway mark a string section has enhanced the mood, just as it does throughout ‘Wayfarer’, with strings and brass that swoop in to carve an uneasy groove until a resolution of sorts arrives in a melodious, dreamy orchestral break, by no means the only time on Western Stars that this device is used to counter melancholy with charm.
The same lush feel permeates ‘Tucson Train’ in which fulfilment replaces the endless search, all accompanied by a repeated orchestral measure that is equally beguiling, our hero having swopped rainy ‘Frisco for the warmth of Arizona where he awaits his girl’s arrival on the railroad. ‘Western Stars’, less cheerful, is an overt homage to the wild west, its protagonist a washed up bit part actor ‘once shot by John Wayne’, while in ‘Drive Fast (The Stuntman)’, which features another gleaming string break, his body is held together by pins and rods. If the Nebraska-with-strings feel of these downbeat songs is classic Springsteen, that nostalgic glance over the shoulder, then ‘Sleepy Joe’s Café’, which punctuates them, offers a touch of light relief with a skip-along rhythm and cheery tale of a favourite hangout. The only problem is that it feels out of place.
There’s a wonderfully hymn-like sweep to the orchestration of ‘Chasing Wild Horses’, a ballad of the Big Country which, like the following ‘Sundown’, introduces a pedal steel into the backdrop. This latter song, about a place where Springsteen drifts idly from bar to bar awaiting his loved one, reminds me – oddly – of ‘Queen Of The Supermarket’ from 2009’s Working On A Dream, an album that opened with ‘Outlaw Pete’, another of Springsteen’s wild west tales, and one that at over eight minutes certainly outstayed its welcome.
Back at Western Stars, ‘Somewhere North of Nashville’, sparse and short, is a portrait of a loser, while ‘Stones’ is a bleak memory of a failed relationship, perhaps the love for whom he is searching in ‘There Goes My Miracle’, for which Springsteen croons like a balladeer from the pre-Elvis era. ‘Hello Sunshine’, the track released early, is an easy-on-the-ear melody, welcoming the light after darkness, and the album closes with ‘Moonlight Motel’, an atmospheric portrayal of a derelict inn where some long forgotten romantic encounter took place, and which now acts as an allegory for the wistful emptiness that permeates Western Stars as a comprehensive statement.
Anyone who’s read Born To Run, Springsteen’s autobiography, will know that when he’s not working he gets on his (motor) bike to ride the highways of America with biker pals who care not one jot about his life as the Boss, and I like to think that this experience informs much of this unusual, 19th, entry into the Springsteen back catalogue. In interviews I gather he’ll soon be back on more familiar territory with the E Street Band, but in the meantime I salute an artist who’s never been afraid to seek out new territories for whatever he can find.