LED ZEPPELIN: THE DAY I WAS THERE by Richard Houghton 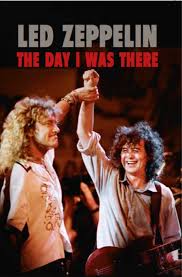 Seeing Robert Plant referred to as Bob is as rare as seeing Bob Dylan referred to as Robert, but in Led Zeppelin: The Day I Was There Derek Thomas, who was 14 at the time, recalls that in 1965 ‘Bob’ Plant was fronting a band called Black Snake Moan at St John’s Hall, Stourbridge. “Bob was always around,” he says. “If there were any local gigs on with local musicians up would pop Bob and he’d take over lead singing or join the band. I even saw him at a New Year’s Eve gig at Dudley Town Hall. Roy Harper was there, all nice and gentle, and up pops Bob. At the end of the evening he and Roy were singing ‘Auld Lang Syne’ to us.”
It is anecdotes such as this that make these ‘I Was There’ books published by This Day In Music such fun to read. Following on from The Beatles, Stones, Who, Bowie, Dylan, Springsteen, Pink Floyd and Hendrix, TDIM now brings us this one on Zep, compiled by Richard Houghton but in reality written by fans for fans. The books all follow the same format, with several hundred attendees writing about shows they’ve seen, and there is no question that in their own way they tell a story, not just of the story of the act in question, which is self-evident, but a story of devotion that, in some cases, is not just extraordinary but also life affirming in an era when rock music seems to matter less and less to its innate constituency.
Pleasingly, this new addition to the series opens with a handful of pre-Zep gigs by ‘Bob’ Plant in a band or two around the Midlands, and the Yardbirds, featuring Jimmy Page, in the USA (though, strangely, not the UK), right the way through the Led Zep years (and slightly beyond) to June 30, at Frankfurt, on their final European jaunt in 1980, a tour misleadingly described as ‘disastrous’ on the back cover copy. While certainly not in the same league as the barnstorming tours of the early seventies, ‘Zeppelin Over Europe 1980’ was a genuine attempt to rediscover their roots, cut down on the excess and somehow find their way back into a rock world that had changed irrevocably since the setbacks that caused the group to withdraw from the arena after the debacle of Oakland, July 23 & 24, 1977. Now that really was a ‘disaster’.
Many, though not all, of the gigs that I saw are included in the book so it’s nice to read reports from fellow attendees whom I never knew, especially Sharon who hitched from Wales to the Bath Festival in 1970 and mentions she was also present at a ‘horrendous’ festival in Yorkshire the same year. That must have been Krumlin where I saw Elton for the first time. Sharon and I are in total agreement re both events. Andy, who was at the Marquee on 23 March, 1971, a show I reviewed for Melody Maker, doesn’t mention how packed it was, and neither Ian not Dee, who saw the Alexandra Palace show on 22 December, 1972, mention the atrocious sound. A shame the publishers were unable to find anyone who in October 1972 was at Montreux Casino where, in hindsight, the two concerts I saw rank as my best ever Zep encounter. The wearing and tearing that bedevilled Led Zep in January 1975 – Plant’s throat problems and Page’s injured finger – concur with my memories of these shows, along with the restoration of normal service by the time they reached New York and Madison Square Garden by February. I saw the group from the floor a few rows back at the same Garden in June 1977, when I went as a mere spectator, not as an MM critic, my 12th and final Zep show and the first time I didn’t take notes, so it’s nice to read what those around me thought.
What does come across by reading all these accounts of shows is not so much the performance reviews, which are uniformly positive, but the extreme tests of endurance that many fans had to undergo to obtain tickets and travel to the venues. Queueing overnight, hitching and experiencing bad weather outdoors or insufferably crowded stadiums are all borne with a shrug, as if nothing is too awful to bear for a glimpse of Zep in action. Only football teams generate more loyalty from their fans but football teams are transient, changing every season with players coming and going all the time. Certain older rock groups are slowly doing the same thing, of course, but modern ticketing – let’s not talk about the prices here – stadium layout and improved seating make life far more comfortable for the 21st Century rock fan. So spare a thought for Jen who queued for eight hours for the Leeds Uni show in March, 1971, and tells us she would have queued for eight more hours had it been necessary. That’s dedication for you.