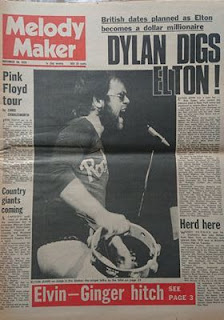 Mondays on Melody Maker were always a bit stressful for me. It was the day when we had to come up with a front page lead story and, as the paper’s News Editor, this was often my responsibility. I can remember quite clearly how we chose Elton John over Pink Floyd for the cover story for MM’s November 28, 1970, edition; a decision made in committee by editor Ray Coleman, assistant editor Richard Williams, chief sub Alan Lewis and myself. Though Elton had never been on MM’s cover before, we opted to go with the bold headline DYLAN DIGS ELTON!, a rather OTT reaction to the news that Bob Dylan had evidently twice visited New York’s Fillmore East to see Elton perform during the previous week. I guess we assumed that Dylan wouldn’t have gone back a second time if he hadn’t ‘dug’ him.
At this time Elton John was by no means the big star he would soon become. His first album failed to chart, his second had spent 14 weeks on the LP charts during the summer, rising no higher than number 11, and ‘Your Song’ wouldn’t become his first hit single until the following January, and even then it only reached number seven. So we were taking a bit of a chance on Elton. As it happened I’d seen him in impressive action at least twice by then and this no doubt swayed my vote, even if it did mean that my story about the forthcoming Floyd tour was relegated to the left hand column.
All of this flashed back to me yesterday as I sat and watched Rocketman, the screen musical based on Elton’s life and music, and it was gratifying to see this MM front page flashed up on the screen during an early sequence designed to illustrate how rapidly Elton’s success accelerated during 1971. Blink and you’ll miss it, of course, but for a couple of hours I was transported back to a time when covering Elton’s rise to stardom was part of my brief, one I enthusiastically accepted, following him and his entourage from a cold Halifax night in mid-1970 to the Hollywood Bowl in Los Angeles, via London, New York and a few more cities in between until I left the paper in 1977. 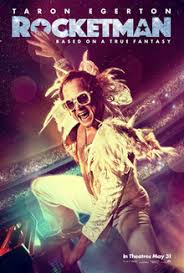 All of which shaded my point of view with regard to Rocketman, and it wasn’t until that sequence that I realised it isn’t intended as a chronologically precise biopic so much as a screen musical based on Elton John’s life and music. As such, the movie wholeheartedly endorses the character of its subject. It’s larger than life, a bit camp and, above all, hugely entertaining in a style that liberally mixes fact with fiction, a bit like musicals in the old Rodgers & Hammerstein Hollywood tradition insofar as the songs are used primarily to move the plot along or convey a mood. Once I got my head around this and stopped saying to myself, ‘But he can’t have sang that then because it came out two years later,’ I found myself enjoying it immensely.
The story is told in a series of flashbacks while EJ is undergoing therapy for countless issues, alcohol, drugs, sex, bulimia, you name it, and in this respect it’s a Rake’s Progress as we watch sweet young Reg, an introverted schoolboy from a broken home, climb the ladder to success while simultaneously sliding down the ladder of his addictions. The early realisation that he possesses an unusually fine musical ear has echoes of that John Lewis Christmas ad, and the moment when he finds the right melody for ‘Your Song’ on the family piano, watched by his mum, gran and lyricist Bernie Taupin, is magically played.
Taron Egerton, hitherto unbeknownst to me, gives a bravura performance in the title role, on screen for the remainder of the movie after EJ comes of age, which is about 20 minutes in. He sounds like Elton when he sings and even looks like him, especially when he’s wearing one of those outlandish costumes. Jamie Bell plays well as Taupin, EJ’s key accomplice, but I was slightly dismayed by the clichéd manner in which other supporting characters were portrayed, presumably for stereotypical effect. Manager/boyfriend John Reid could certainly be an effective attack dog when required, but in my recollection he wasn’t quite as nasty as he’s played by Richard Madden, and Dick James, although old school, was far more endearing than Stephen Graham’s characterisation of him as a miserly, arrogant, cloth-eared ogre. I only ever met Sheila, Elton’s mum, on a couple of occasion but she seemed considerably more supportive of her son’s calling than her portrayal here.
But all that’s quibbling really. The film comes to life in spades during set-pieces when Elton performs, often in a kind of fantasy style that is reminiscent of musicals like Tommy or even Mama Mia!, and, during the early scenes, That’ll Be The Day. I liked how we surreally switch into a street scene, then a fairground, for ‘Saturday Night’s Alright For Fighting’ after Reg plays the piano in a Pinner pub – an early indication that the songs will appear when director Dexter Fletcher wants them to and not when they were written, recorded or released. The Bluesology scenes seem faithful to history while other concert sequences, featuring all the hits you would expect to hear, are eye-catchingly compelling, particularly the Dodgers’ Stadium gig, a tour-de-force with EJ’s character switching outfits more times than I could remember.
The gay sex scenes are nowhere near as explicit as you might think from reading reviews, and it’s hardly shocking to see Elton hoovering up cocaine in an era when not to do so was regarded as unusual, at least in the music industry. Great attention is paid to period detail, in both the US and UK, with nostalgic street shots featuring cars (I do love a nice Triumph Herald like my dad used to drive), seventies fashions and glitzy interiors that are correct for the era. What isn’t correct, at least not as far as I’m aware, is Elton’s attempt to kill himself by jumping into a swimming pool in LA while out of his skull on booze and Grade As but, again, it fits in with the redemptive plot and conveys the unnecessary message that behaving in this way isn’t recommended.
The film takes Elton’s life up to around 1990 when, realising that he was becoming friendless through behaving like a spoilt brat, he chose to face his addictions and clean up his act. Fittingly it closes with ‘I’m Still Standing’ – an odd mix of footage from the original video on the beach at Cannes – followed by what seemed to me like a duet on a new song between Egerton and the real Elton. Meanwhile text on the screen reveals the happy ending: the Elton John of today is loved, content and cured of all his bad habits bar excessive shopping.
So long as you are prepared to overlook the lack of authenticity and treat the film simply as a source of enjoyment, Rocketman is an immensely entertaining film and a fine tribute to one of the world’s best-loved rock stars. Elton really has written loads of memorable, truly wonderful songs. No wonder Dylan dug him.

I remember the cover and the headline! I also remember the long walk from Elephant & Castle to the West End to buy his second album. It amuses me to know I must have been served by both Elton and Danny Baker in One Stop!
First time I saw him live was supporting The Who on a charity event at The Roundhouse. I loved his songs but couldn’t believe how irredeemably dull he was in concert, when it was just him Dee and Nigel all 3 dressed in all black. That certainly changed later!

As a Yank studying in the UK in '70-'71, what I recall most painfully was having to endure "Your Song" on the radio for months after having done so already in the States. It wasn't even a little bit funny.