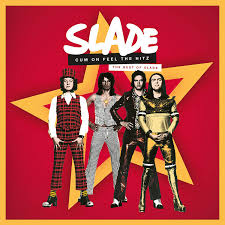 My part-time job as Slade's go-to man for sleeve-note writing began in 1972 with Slayed, on the back of which were the first I did for anyone. Chas paid me £20 by cheque, which is about £250 in today’s money, not bad for about 300 words. Then came the hits albums, the first Slade: Wall Of Hits, released in 1991; the second Slade Greatest Hits: Feel The Noize (1997); and the third The Very Best Of Slade (2005), this last one – like the most recent – a double CD. This had my most extensive notes of the three and benefited from an interview I did with Noddy in the bar at the Landmark Hotel on Marylebone Road in London. I think he’d come down from Cheshire specially to meet up with me so I could cobble together something new. Nevertheless, I was pissed off when the CD came out because whoever designed the booklet had opted to use tiny white type on a silver background, thus rendering my notes illegible unless you used a magnifying glass. Art direction and design were credited to someone who went by a single name – ‘Peacock’ – so if anyone knows who he or she is, please communicate my displeasure.

Come to think of it, my Slade sleeve-note tally could arguably amount to five because a quote from me, dated 23/12/70, appeared on the fold-out sleeve of the original Slade Alive! “… on stage Slade are one of the few groups who work hard to entertain an audience, they have a long future ahead of them and plenty of time to develop their exciting style.” That’s actually a bastardised version of my prediction in Melody Maker – recently posted here on Facebook – that Slade would be one of 1971’s top bands. (Trivia fans might like to know that a couple of inches below that is a quote from Leon Hickman of the Bradford Telegraph & Argus. In 1968 Leon and I worked together on the T&A and between us we produced the paper’s first ever weekly pop page, my first stab at music writing.)

In considering whether or not to buy the new compilation I spent an hour looking over the other three Slade hits CDs on my shelf, all of which were probably given to me by Slade’s record company in return for the notes I wrote, along with progressively larger remuneration. And though I say it myself, I’m still quite proud of my notes for the first of these for Wall Of Hits (not Hitz!). It was 39 years ago that I first identified an issue that still rankles with me and many Slade fans today.

“As the pop music industry reaches its hi-tech but insecure and rather overcrowded middle age,” I wrote, “statistics from earlier eras take on truly insurmountable proportions. Did The Beatles really have 22 top ten hits – including 17 chart toppers – in the seven years that followed their chart debut in 1963? Yes, they did. And in the decade that followed did Slade come the closest anyone ever has to emulating that? Yes, they did: 16 top 20 hits between 1971 and 1976 that included six number ones, three number twos and two number threes. No other UK act of the period, not T. Rex, not David Bowie, not Elton John nor any other ‘superstar’ act enjoyed such constituency; nor is such consistency feasible today.

“Two decades after the event, Slade remain the only act ever to enter the UK chart at number one with consecutive releases, a feat they accomplished three times in all.

“Despite these statistics, rock historians have been less than charitable to Slade. Their happy-go-lucky, good humoured personalities, their complete lack of pretension or political motivation and their generally irreverent attitude towards the art of rock were never likely to appeal to serious music critics, and there seems to have been a post-Slade conspiracy to place them in the file marked ‘trivial’; little more than an amusing footnote in the story of glam rock.

“This is unjust, not least because their success was by no means confined to their extraordinary run on the singles charts. Three of their albums topped the LP charts between 1972 and 1974 and a fourth, Slade Alive!, reached number two and stayed on the charts for an astonishing 58 weeks. Simultaneously Slade concerts filled the largest halls in the country, including a memorable sold out show at Earls Court that drew 18,000 fans. They were without question one of the most popular – and most competent – live rock acts this country has ever seen.”

The charts don’t mean much now. In the 39 years since I wrote all that, Slade’s achievements have been surpassed by all and sundry. The boy band era that began with Take That saw all manner of fiddles – sorry, marketing strategies – that enabled single after single to enter the charts at number one. At one point it was so common that not to enter at number one was regarded as a failure. Sales of singles are a fraction of what they once were and when Top Of The Pops bit the dust no one much cared anymore. Still, it was nice to see Cum On Feel The Hitz – The Best Of Slade doing as well as it did, even if I didn’t buy a copy myself.

By the way, who wrote the sleeve notes?

Great write up Chris. Still the best live band I ever saw

As the bloke behind 'Slade In England' it has long been the raison d'etre of all I have tried to do over the decades. To only bother with Slade and not the follow on risible tawdry shower that have relentlessly murdered both the name of the band and their back catalogue of classic pop rock tunes.
The arty farty pseudo artists that are considered 'serious' and worthy of deification couldn't hold a candle to Slade, Live they were one of the very very very best acts this country has ever produced.
You are synonymous with Slade as far as the fans are concerned, always a champion of them from as far back as I can remember...which more or less where Slade are concerned is your couple of lines and a namecheck on the inside cover of Alive in 72'.
I...am one of those 'uber' fans that refused to buy yet another rehashed version of stuff we have all owned for decades.

Nice post, Chris!
I am one of the daft buggers who still bought the CD even though I don't need it and will never play it, even though it is a pretty comprehensive collection ( I would only substitute two tracks! )
I didn't and wouldn't buy the vinyl though. Been there, done that!

"By the way, who wrote the sleeve notes?"
Who cares? Probably some no nothing who had to read your notes to research his piece.
Well done Chris. Slade Alive set my musical life on track. Following bands had their work cut out. Pure passion, energy and entertainment are measured against Slade in '73.

Good write up Chris as you said the band seem to get forgotten in certain circles along with yourself ,but hey the bands music still rocks albeit in the same old formats and you like me and other slade fanatics still smile when there mentioned nice quote of mickey p the person who wrote them had to look up all your brilliant sleeve notes and compliments to write them as he or she wouldn't have a clue as they don't know how great this band were, nice to see your comments mickey