Later in May I was in the company of Bryan Ferry of Roxy Music, then pretty much an unknown quantity in America. In the UK Roxy had been fast-tracked to success on the strength of their inventive records, positive press coverage and the way they dressed but none of this cut much ice in a country the size of the USA where the accepted wisdom was that success came only to an act that toured extensively. As a result, Bryan, on a promotional tour of the US, was exhausted.

“Not much lounging for the lounge lizard this week,” I wrote in MM. “All go. Up at dawn to another city. Another round of interviews. Another airplane. Another late night. Another early call. Six days on end. Somehow his black hair maintains its usual crisp quiff even if his eyes blink a lot and need a good rub to prevent the lids from clamping together. A cup of tea. An untidy suite. A television with picture and no sound. An album set containing 72 of Frank Sinatra’s greatest hits, a prized possession indeed.

“In the past five days he’s flown from London to New York, spent a day in Cleveland, a day in Detroit and a day in Chicago, and also visited Philadelphia and Boston. Each day was crammed with press and radio interviews, and each evening was spent discovering the delights of America. ‘The first American tour was a terrible bring down really,’ Bryan told me. ‘It was the only time we’ve ever been... er, not appreciated. It was sandwiched between two English tours which were rave tours and to come here and be totally unknown was obviously a bit of a downer. People I spoke to on that tour who had the first album never even knew we were due to play in the town on that day. What we should have done was to play in small halls rather than support big bands in the big arenas. This is what we’ll do next time.’”

Like other acts that targeted a more sophisticated audience than American-style ‘boogie all night long’ rock fans, Roxy found themselves more appreciated in the big cities on the coasts than in the great hinterland in between. A party was thrown for Bryan at a loft in downtown New York where trendy taste-makers from among the Andy Warhol crowd gathered to inspect this rock star who looked and dressed more like a ’fifties crooner than Robert Plant or Roger Daltrey.

This was the first time I’d ever been inside a New York loft. Unlike what we in the UK call the space beneath gable roofs of houses, in New York lofts are apartments originally designed as workshops, most often found downtown where small industries like textiles and bespoke furniture once flourished. As a result, they are vast open spaces, without interior walls, like XXL studios I suppose. Bryan was the centre of attention at the party, and enjoying it, but I managed to corner him for another chat, sitting on beanbags as a I recall, not the most elegant lounging position for this most elegant of loungers.

“We were very fortunate to be successful from the first record onwards in England, maybe because of the mechanics of the English system,” he continued. “There isn’t a huge rock press over here, and in England we were always written about from the very beginning so people were aware of us before even the first album came out. Here people are more influenced by FM radio and they’re more unadventurous in their outlook. There seems to be a dreadful musical snobbery between AM and FM radio and Roxy doesn’t seem to fall into either of these accepted categories. We’re too weird for AM, and considered too flash and too image conscious for some of the FM stations.

“Americans aren’t so preoccupied with style as the English are, but it could be changing. When I was in Detroit, I got a phone call from Canada during a radio interview and this kid said that he cut out photographs of me and took them along to his hairdressers so that he could imitate my hairstyle. I was very flattered.” 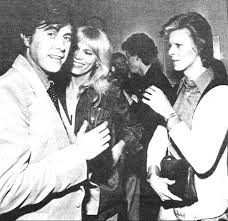 Bryan Ferry, Amanda Lear and David Bowie at the loft party. That looks a bit like Lou Reed hovering in the background, as was I somewhere. I found this picture, which looks like a scan from a magazine, on the internet, photographer unknown.

The promotional visit previewed Roxy’s June 2 concert at the Academy of Music, following which the artist Larry Rivers threw an after-show party in his East Village loft studio that was attended by David Bowie. On his arm was Amanda Lear, the cover model from Roxy’s For Your Pleasure LP. “Roxy’s image has attracted a clique following of film stars, artists and general Warhol-type personalities and they turned up in droves for the after-show party,” I reported in my weekly MM NY news column.

Two days later I found myself face to face with Sly Stone who proved even more difficult to interview than Lou Reed. The encounter took place in a small apartment on New York’s Westside that adjoined his manager’s offices. I was told he didn’t like hotels. I suspect it was more a case of hotels not liking him but thought it best not to air this opinion. By his side during the interview was his fiancée, Kathy Silva, whom he would marry on stage at Madison Square Garden on June 5, the first American wedding to which I was invited, though probably not a typical Stateside tying of the knot.

They made a handsome couple. Sly had dressed for our interview as he would for a concert; a gleaming all-white leather outfit with tassels and rhinestones, topped off with his huge afro. Silver sunglasses hid his eyes. Kathy was wearing a matching ensemble except for her mini-skirt which was provocative to say the least. This might have inspired what occurred midway through our chat when she and Sly decamped to the adjoining bedroom to do what comes naturally to men and women in bedrooms, quite noisily too. In the meantime, I was left in the company of his publicist, a long-suffering girl who tried to make small talk in the temporary absence of her client. It was excruciatingly embarrassing, albeit quite funny in hindsight.

The interview got off to a bad start. “He extended a hand but looked elsewhere,” I reported. “Who could tell where his eyes focused beneath those silver shades? He gripped and I felt a pain through the middle finger on my right hand. He grinned and disappeared. About half an hour later I found out what had caused the pain. On his two little fingers were a couple of matching rings. Spelled out in diamonds were the words ‘Sly’ (right hand) and ‘Stone’ (left).

“Meeting Sly is like coming face to face with an ugly cop. He isn’t social. He isn’t friendly. He resents intrusions on his privacy. He doesn’t like to talk. He’s a star and he acts like a star ought. Moody, mean and magnificent.”

What actually happened was that when Sly arrived, preceded by a white personal assistant, he breezed into the adjoining office and disappeared almost immediately, allowing me just a glimpse of him. After ten minutes he re-appeared, taking us through to the apartment which was tiny by rock-star standards. I offered him a copy of Melody Maker, pointing out that it contained an article on him, a retrospective in our ‘Rock Giants’ series, which prompted him to retire to his toilet to read it. He was gone for another ten minutes.

While waiting, we were joined by Kathy. Then Sly re-emerged to the sound of plumbing and sat on a couch, still reading the MM. Thereafter the interview spluttered on with Sly answering my questions, largely in monosyllables, and Kathy chipping in here and there to offer support. Their decision to retire to the bedroom after about ten minutes seemed motivated on his part by a need to prove his macho credentials in the face of a white man with a British accent with whom he had little in common.

“Do you get bored with always playing the very familiar material like ‘Dance To The Music’ and ‘I Want To Take You Higher’?” I asked when he returned. “No,” he replied. “They like it and they keep on liking it and you gotta keep telling people you like it, too. I love every period of my career.”

I asked about who played on his records and he told me he played every instrument, implying that it was disrespectful of me to suggest otherwise. “I just overdub everything,” he said.

“Where do you write?” I asked. “I write on the toilet ‘cos no one bothers me there. I enjoy myself best on the toilet and I wouldn’t invite you there.”

This last remark brought the interview to an inevitable conclusion. Sly’s assistant showed me to the door while the man himself curled up on the sofa with his fiancée. “You know something,” said the PR girl. “He really opened up this afternoon. Usually he just grunts at writers. He’s done a few interviews this week and he said more this afternoon than he’s said all week.”

On June 5, I was at the Garden to report on Sly’s marriage to Kathy. “The ever-unpredictable Sly Stone married the mother of his nine-month-old son in front of 20,000 fans at Madison Square Garden on Wednesday evening,” I wrote in MM. “Following a set by Eddie Kendricks, Sly’s mother came on to the stage to call for quiet. Then she introduced Sly’s 12-year-old niece who sang a gospel hymn like someone twice her age before the stage filled with friends and relations all dressed in gold costumes. 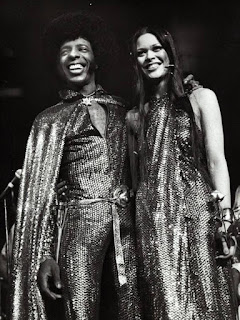 “A dozen girls holding palm leaves high in the air formed a backdrop as Sly himself loped out last, dressed all in gold with a gold cape. The preacher – brought in specially from San Francisco – called for hush and the service began. Appeals for the audience to keep silent because of the solemnity of the occasion were largely ignored, but the words of the marriage service were clearly audible through the PA system. When the words ‘Do you, Sly Sylvester Stewart, take this woman’ were uttered, a huge cheer went up. The service closed with the traditional ‘Let no man put asunder’ line which prompted the crowd to go crazy.

Then everyone trooped off. The whole affair was over in less than 15 minutes. There was another delay before the band came back on, followed by Sly who ripped into a long set, at least by his standards.

“The new Family Stone included a violinist and there were several new songs in his repertoire as well as old favourites,” I informed MM’s readers. “‘Dance To The Music’ opened and closed the set. Musically, Sly was as good as ever, alternating between organ, guitar and harp. He seemed to rise to the occasion and actually addressed the audience between numbers instead of merely jumping from one number to the next to hurry the proceedings over as quickly as possible.”

Two years later Sky and Kathy separated. “He beat me, held me captive and wanted me to be in ménages à trois,” Kathy later told People magazine.