Among other acts hitherto unmentioned that I interviewed during the first half of 1974 were Dr Hook, Rick Derringer, Loggins & Messina, Buffy St Marie, Harry Chapin and Gary Puckett whose ‘Young Girl’, a 1968 hit with his band The Union Gap, had mysteriously re-entered the UK charts in June. Editor Ray Coleman was always asking me to chase up oddities like this and, as it happened, Gary was in the Philippines shooting a movie so I spoke to him on the phone since no one offered to fly me there.

I went to see Dr Hook at a club in New Jersey, driven there in a limousine courtesy of Columbia Records. I chatted with Ray Sawyer who wore an eye patch, the result of a car crash, and Dennis Lacorriere, their singer, in a cramped dressing room and watched a lively show afterwards. They were a light-hearted lot who reminded me a bit of Lindisfarne but what I remember most about Dr Hook is that someone with a gun took a shot at the limousine as we were about to leave. We sped off down the road and after a couple of minutes the driver got out to take a look. Sure enough there was a scratch where the bullet ricocheted off the bodywork at the rear. I have no idea why this happened. Perhaps our rifleman simply didn’t like limousines.

I liked Harry Chapin a lot. He reminded me of a schoolteacher but his heart was in the right place and that was where his songs came from. After a career in which philanthropy played a key role, in 1981 he was tragically killed in a motor accident aged just 39.

My mid-summer highlights, however, were seeing Eric Clapton at Three River Stadium in Pittsburgh, PA, on July 5, and Crosby, Stills, Nash & Young, at Denver in Colorado two weeks later, about which I’ll post tomorrow.

Clapton was on with The Band, friends of his from Big Pink days who’d steered him away from the excesses of Cream, but their music, Americana at its very best, was lost on the massive crowd eager to see their guitar hero. I was looking forward to seeing him too as I’d been sent an advance copy of 461 Ocean Boulevard which I liked a lot. What I remember most about this trip, however, was meeting Pattie Harrison, who arrived at the side of the stage midway through Eric’s set.

With their affair yet to become public knowledge I was ignorant of the whole business until I saw her being ushered in by Robert Stigwood, Clapton’s manager. I recognised her, of course, but couldn’t for the life of me figure out why she was here. Before long, however, the affectionate glances between her and the chap in the middle with the Fender Strat around his neck led me to the obvious conclusion.

“Chris, do you know Pattie?” asked Stigwood as the two of them assumed a position close to where I was standing.

As we shook hands I could see where the attraction lay. Pattie Harrison was indeed lovely; slim of figure in tight-waisted bell-bottom jeans and a pale blue silky top, angelic of features with soft blonde hair that tumbled down around her shoulders, the slight gap in the top row of her teeth giving her a childlike innocence that was enormously becoming. None other than Keith Moon had once declared his admiration for her to me at his house in Chertsey when I interviewed him there three years past, but Moon, though a model of indiscretion in most respects, was far too deferential towards The Beatles to proposition one of their wives, as Pattie then was and, for that matter, still was, at least on paper. Clapton was evidently more determined – or more infatuated.

In hindsight, I have reason to believe that Pattie’s arrival was engineered by Stigwood in the hope that she might curb his client’s consumption of alcohol. In the event he was wrong, for July 5 happened to be the 31st birthday of Robbie Robertson, the leading figure in The Band. To be honest, though, Clapton didn’t need a reason to find strength from the whisky bottle in those days, being pretty much pissed as a newt most of the time. Before the show he was staggering around backstage trying to discover the whereabouts of The Band, then elsewhere in the vastness of Three Rivers Stadium. Each time he asked someone they’d reply something along the lines of, “right here, Eric.”

“Not my band, THE Band,” he’d say, exasperated. “It’s Robbie’s birthday today and... there’s gonna be some bovver tonight.”

Remarkably, Clapton’s inebriated state made not one iota of difference to the vigour of his performance. Perhaps facing 42,000 fans – the biggest crowd ever at Three Rivers – had a sobering effect, but when he walked on stage, acoustic in hand, followed by his group and preceded by Legs Larry Smith, the English country joker, late of the Bonzos, acting as compere, he seemed completely in control.

Legs Larry had been hired to play down the superstar angle that Clapton wanted to shake off, as had Yvonne Elliman, the easy-on-the-eye Hawaiian singer whose main contribution to the set came early on, during the acoustic songs. Clapton, wearing a floppy hat and shabby dungarees, opened the show with ‘Smile’, the old standard written, oddly enough, by Charlie Chaplin that came as something as a surprise at first but seemed more and more apt after continued hearings. It sent out a message of good vibes from the start – “Smile, when your heart is achin’” – and quietened down an audience eager for hi-powered rock. ‘Smile’ moved into ‘Let It Grow’, another easy-going acoustic song with Clapton and Elliman singing harmoniously together, then ‘Can’t Find My Way Home’, Steve Winwood’s Blind Faith song. Slotted hurriedly between them at Pittsburgh was a spontaneous ‘Happy Birthday’ for Robertson who was now standing at the opposite side of the stage to where I was. Its significance was lost on the crowd. 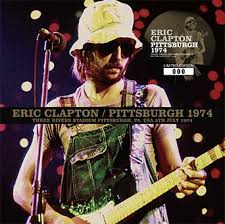 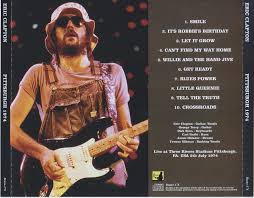 I found this bootleg from the show I saw advertised on the internet.

With the acoustic exchanged for a Stratocaster we were into the main course. During ‘Blues Power’, the first electric number, Clapton was hit hard on the side of the face by a well-aimed missile that turned out to be a New Testament, wrapped in a small chain with a message from the local Jesus freaks. Not knowing what had hit him, he fumed for a bar or two, picked up the tempo again and bellowed his disapproval down the microphone. Then Pattie arrived, soothing the situation as the set progressed, Clapton for the most part delivering songs from the forthcoming 461 Ocean Boulevard, with ‘Motherless Children’ and ‘Mainline Florida’ offering ample opportunities for everyone to stretch out.

The closing song of the set proper was Chuck Berry’s ‘Little Queenie’, enlivened by a re-appearance of Legs Larry who smashed a plastic ukulele a la Townshend, hurling the debris out into the crowd. As encores, after much cheering, there followed ‘Tell The Truth’ and a lengthy, turbo-charged ‘Crossroads’ that generated the most inspired soloing of the night.

For those who experience it only occasionally, there is something positively awe-inspiring about standing on a stage a few feet from a rock superstar playing to an audience in excess of 40,000; the vast sea of faces stretching out into the distance, the waves of adulation they release, the deafening on-stage volume of the music, the whole experience amplified for me this night by the freshly realised knowledge that the superstar’s mistress, the wife of a Beatle no less, was standing right next to me. Surreal is a much-overused expression, but it certainly applied here. We were both ‘half dancing’, as you do in situations where restricted space precludes a full twirl, and she was smiling towards the man with the guitar, and every so often, as ‘Crossroads’ surged like a tsunami, he would glance across as he played and smile back at her.

Back at the hotel Clapton found The Band, or they found him, and even Pattie was unable to curb the carousing that went on well into the night. Robertson, a man of fairly sober habits next to his team mates, retired early but Rick Danko and Richard Manuel kept the party going in Danko’s room until dawn broke, by which time Pattie had dragged Eric back to their suite. I recall seeing him reeling down a corridor, the slight figure of his inamorata steadying him as they lurched along. As it happened, that night I befriended Danko who a year later would try to put the make on my sister after a Band concert in New York – but that’s another story.