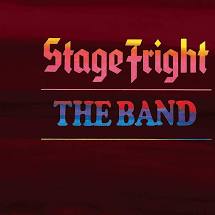 Those who were there will tell you that it was the best concert of their lives and, judging by the eloquence of Richard Williams in a review on his Blue Moments blog two weeks ago, I am inclined to believe them. Richard, the assistant editor of Melody Maker during my early years on the paper, was a clearheaded critic who more often than not kept his emotions in check, but he was unusually passionate in the office the morning after he saw The Band at London’s Royal Albert Hall on June 2, 1971. Two days earlier he and our colleague Chris Welch had interviewed the five members of the group at their London hotel while our photographer Barrie Wentzell took pictures, one of which appeared on that week's front cover, and Richard wasn’t exactly tight-lipped about that either. 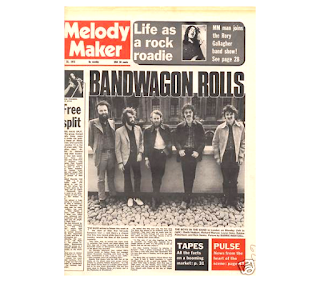 Now that entire concert, barring one encore*, has been made available as a bonus second CD in the just released 50th anniversary edition of Stage Fright, The Band’s third studio album, and as anticipated it’s an absolute monster, certainly superior to what I remember of the three Band shows I saw in America between 1974 and 1976. It also bests Rock Of Ages, the live double LP from 1972 on which, to my ears, the group’s distinctive lean sound was impaired by the addition of Alan Toussaint’s horn arrangements.

At the Albert Hall there is no introduction, just a split-second roll from Levon and a sinewy guitar figure from Robbie before the group steam straight into ‘The Shape I’m In’, Richard on lead vocals with the rest joining him on the choruses and Garth upping the ante with some characteristic swirling Hammond lines. The song over, there’s a frighteningly short delay before they’re into ‘Time To Kill’, equally rollocking, introduced by Robbie’s crashing chords, soon joined by Rick’s bass before he and Richard share lead vocals. Two songs in and they’re so nimble they sound as if they’ve been playing all night. Next up is ‘The Weight’. 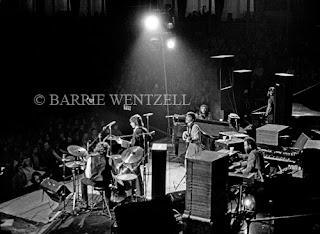 The Band at Albert Hall, June 1971. Picture by Barrie Wentzell, as indicated by the watermark.

The Band had many assets, not least their economy, multi-instrumental capabilities and solidity as a unit, but I’m hard pressed to think of another quintet of players with four singers all capable of singing lead who sounded so distinctive, so dissimilar to one another, and who as a consequence could be individually assigned the songs most appropriate to their vocal stylings.

Levon, whose drum kit was tiny and all the better for it, usually took on the more aggressive songs, especially those that expressed anger at the misfortunes of dispossessed rural folk. Also, he and his kit were placed at the side of the stage, subtly implying that unlike every other drummer you care to mention he was part of the front line. Rick’s deeper timbre found voice in their more romantic repertoire, not least their cover here of ‘Loving You Is Sweeter Than Ever’, while pianist Richard’s forte was their soulful side, best exemplified here in a passionate, incandescent reading of ‘I Shall Be Released’. Though not quite as expressive as his three colleagues, Robbie was at home just about everywhere but confined himself largely to harmonies while concentrating on his Tele leads and fills.

Nowhere are these multi-faceted vocal skills more exemplified than in the multi-part counterpoint harmonies that close the Richard-led ‘Rockin’ Chair’, a sheer delight previously heard as one of the three live recordings from the Albert Hall included on The Band’s Musical History 5-CD set in 2005, but to my ears the version here sounds marginally different, as is the audience reaction.**

The sequencing of the CD suggests – perhaps misleadingly – that every song they played that night followed very quickly after the one that went before. Whatever the actuality of the concert’s pacing, this serves to emphasise their modest attitude towards live work, with no unnecessary introductions, let alone grandstanding.

But back to the music. As the concert sweeps majestically onwards we are treated to the full gamut of The Band’s skills. Levon bequeaths his kit to Richard and plays a Telecaster for ‘Strawberry Wine’ while Garth shoulders an accordion, as he does for ‘Rockin’ Chair’, and he blows a mean saxophone on the playful ‘W. S. Walcott Medicine Show’. My favourite contributions from Garth, the group’s musical polymath, are the fairground whirls and bottom-end rumbles that punctuate so many songs and, of course, the way he conjures up the sound of a Jew’s harp on ‘Cripple Creek’.

But picking highlights from this concert is futile. I’ve been listening to the CD all this past week in my car and office, all the while wishing I could share my enthusiasm for it with my great friend Johnny Rogan, the news of whose death cruelly coincided with its arrival in my home. He’d have loved to hear Levon’s furious growl on ‘The Night They Drove Old Dixie Down’, the segue from that to Richard’s anguished plea to Molly in ‘The Great Divide’ and Rick’s heart-stopping take on ‘Unfaithful Servant’ which follows, a triple treat if ever I did hear one.

The concert closes on another triple decker, the moderate-paced, metronomic funk of ‘Don’t Do It’, the much-covered Motown song, ‘Chest Fever’, prefaced by Garth’s extraordinary Bach-inspired solo on the organ, and a final, glorious ‘Rag Mama Rag’, at which point I’m pretty sure the RAH crowd, including even Melody Maker’s customarily dignified assistant editor, were on their feet and dancing like the Saturday night revellers at a barn dance in rural Arkansas, fuelled no doubt by moonshine distilled by Levon’s great uncles Josiah and Seth somewhere in the woods nearby.

In his essay in the CD booklet Robbie explains that it was only an afterthought that the shows were recorded, and even then merely on a four-track machine. “Nobody was making a big deal out of this,” he writes, adding: “[It was] one of the greatest live concerts The Band ever played…. The Band, at the peak of enjoying our calling, and being so fortunate to have made this music together.”

Finally, I should add that the actual Stage Fright CD includes new stereo mixes of the original LP’s ten songs plus nine bonus tracks, seven of which are casual recordings of songs taped in a hotel room in Calgary on July 3, 1970.

* ‘Slippin’ And Slidin’, though a tremendous live version of this old Little Richard R&R classic, from Calgary in July 1970, can be found on A Musical History.
** The version of ‘Rockin’ Chair’ on Musical History was credited as being from the June 2 RAH concert which leads me to believe that songs on this new live recording were selected according to taste from both the June 2 & 3 concerts, a detail unmentioned in the otherwise excellent accompanying booklet that includes an essay by Robbie, a review of Stage Fright by the LA Times music critic Robert Hilburn and many fine photographs from the RAH show.
Posted by Chris Charlesworth

either way, I agree

".. the moderate-paced, metronomic funk of ‘Don’t Do It’, the much-covered Motown song..."
I've always been fascinated by the way this song was performed so differently by, first, Marvin Gaye, and later by The Band and The Who. Playing their respective versions in that order really shows the varied character of each. BTW, if you do this, I suggest The Who's live take which I believe is on the B-side of "Join Together".

Yes, I'm very familiar with The Who's version, a tour de force for Keith Moon.

I share your enthusiasm for this set! Robbie's resequencing of the album order is an improvement as far as I'm concerned.
The remix does toughen up the overall vibe of this album. Some don't like this; that it's not authentic to the original release. But that is the point of this set: a reimagining. Well done.

The Albert Hall shows is killer; I love Rock of Age snd this is a great companion. Too bad these sets are overpriced when you opt for the full box.