Shortly before Diamond Dogs was released in late May I had been summoned by David Bowie’s ‘people’ to Mainman’s New York HQ to listen to it. Tony De Fries, Bowie’s manager, firmly believed that to be a star, you must look and behave like one, even if you are not, and since by now David certainly was a star, the circus surrounding him was bordering on the absurd, on a par with the Pope or HRH Elizabeth II. To this end I was restricted to a single hearing of Diamond Dogs, not allowed to record it – I was temporarily relieved of my cassette recorder – just take notes, and generally treated like some sort of sub-species by the unpleasant people that worked for Mainman, one of whom lingered as I listened, observing me as a warder might an errant prisoner.

In these circumstances reviewing a record isn’t easy, and I wasn’t even given a lyric sheet, so to come up with 900 words, as I managed to do, was quite an achievement. “Bowie’s new album really is excellent,” I wrote, not my most insightful review, when I returned to the flat and read back my scribbled notes. “It’s a departure from his previous records in that the Spiders are no longer with him, and it’s also a departure in that the whole production of the songs is far more lavish than anything he’s previously attempted. For most of the tracks, he’s adopted a ‘wall of sound’ technique, borrowed not a little from Phil Spector, but the richness of it all enhances his voice no end. He’s also moved further into rock and roll – there’s hardly a slow song on the album – and played all the chunky guitar licks himself, according to the sleeve credits.”

Because of the almost paranoid secrecy surrounding David and his activities, I wasn’t to know that this record would form the basis of a new stage show set to open in Canada in June. The last time I’d seen David Bowie in person was on stage at the Hammersmith Odeon on July 3 of the previous year, the night he announced that the Spiders were breaking up, shocking everyone present, including the Spiders themselves. Now I was invited to the O’Keefe Centre in Toronto to review the third show of his Diamond Dogs Revue tour on June 16, along with a party of other music writers, all of us convinced after the concert that Bowie had re-invented the concept of rock theatre.

It could be argued that Alice Cooper started it all but, compared to what David did on this tour, Alice was a Punch & Judy Show. It being a Sunday night I had to write up my longish review very quickly, in longhand on hotel notepaper, then wait until about four in the morning to call London (10am UK time) and dictate 1,600 words over the phone to Marilyne, Ray Coleman’s secretary, who was also Mrs Chris Welch. We’d progressed from carrier pigeons but e-mails were as remote as Major Tom. It filled page three of that week’s MM.

“A few thousand lucky Canadians witnessed a completely new concept in rock theatre when David Bowie opened his North American tour in Toronto on Sunday,” I wrote. “It now seems likely that Bowie was speaking the truth when he announced his retirement from rock on the stage at the Hammersmith Odeon last year. For the act that David presents on this tour has as much to do with rock and roll as Bob Dylan has with the gloss of Los Vegas.

“The one-and-a-half-hour, 20-song show is a completely rehearsed and choreographed routine where every step and nuance has been perfected down to the last detail. There isn’t one iota of spontaneity about the whole show. It is straight off a musical stage – a piece of theatre, complete with extravagant mechanical sets, dancers and a band that stands reservedly to stage right and never even receives so much as a cursory acknowledgement, like an orchestra in a theatre pit.

“The show belongs on Broadway or Shaftesbury Avenue rather than on the road. The whole concept takes a complete turnaround from what a rock audience anticipates, but at Toronto on Sunday it left them stunned. Perhaps the crowd at the O’Keefe Theatre literally couldn’t believe their eyes… not once did Bowie address the audience, or even allude to their presence other than an odd grin… He was dressed in a light grey suit with blue and white polka dot, collarless shirt, and red braces. He retained the same outfit for the entire performance, apart from removing his jacket. He appeared without any noticeable make-up and gone was the spiky hair style of last year and the year before. In its place was a neat parting; it left little doubt about the masculinity of the performer.

“Fittingly there was no encore and the applauding audience was greeted with the announcement 10 minutes after the show stopped that Bowie had already left the theatre. The Colonel Parker touch is forever there.”

This show never came to the UK. I would see it again at Madison Square Garden on July 19 but the theatrics didn’t really work in an arena and it wasn’t long before the expensive props were put away for good. In the meantime, Bowie’s band – led by session bassist Herbie Flowers – had threatened to go on strike after a show in Philadelphia was recorded and they received no additional remuneration. It was released as David Live. 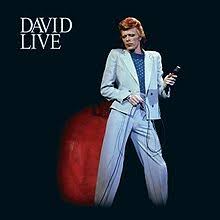 Without the props, the tour continued on the West Coast, merging the Diamond Dogs songs with David's increasing interest in soul music, after which he retired to Los Angeles to lick his wounds, anaesthetising them with cocaine. The following year he released his blue-eyed soul LP Young Americans, its funked-up US No. 1 hit single ‘Fame’ a collaboration with John Lennon that savaged his relationship with manager De Fries.

In 1976 Station To Station, my choice for his best ever LP, merged black funk with the emerging European electronic school, and in Detroit during a thrillingly successful world arena tour that year I would sit down and discuss his career in one of the longest interviews that David ever gave, of which more later. I wasn’t to know it but Madonna, then aged 17, was in the audience for the March 1 concert that I saw. It was, she said later, the first rock show she’d ever attended. For all I know I might have sat next to her.

Excellent, I have a Bowie scrapbook that I called the Melody Maker Files. I'll have to dig it out and read through it again.