Almost three weeks after the Eric Clapton concert, on July 25, I was at the side of the stage for another huge gig before another huge crowd, this time Crosby, Stills, Nash & Young at the Mile High Stadium in Denver. Unstable and prone to outbreaks of verbal squabbling between themselves, CSN&Y nevertheless set aside their differences to undertake a huge tour of the US in the summer of 1974, proving to one and all that they were unquestionably the most popular American band of the era. As with Eric, I can remember gazing out over a vast crowd though this time it was two wired up Americans, one cool Canadian and one delighted Englishman a few feet away from me.

Flown in from New York courtesy of Atlantic Records, I stayed in the same hotel as the group and in the afternoon interviewed Graham Nash. Stephen Stills had been quoted as saying that the first time CS&N went out on the road was for art, the second time for the girls and this, the third, for the dollars, but Graham took exception to this. “We’re doing it for the music, man, because all of us know that none of us can make as good music together as we can apart,” he told me.

Unlike Crosby and Stills, Nash was thin and wiry, and he spoke so passionately that I couldn’t help but believe him. Stills wandered into the room at one point, and was very friendly. Nash introduced us. “This is Chris, from Melody Maker in London.” “English, huh,” said Stills, thereafter that day calling me ‘English’, never Chris. I didn’t mind.

Later in the afternoon I found myself in the lift with Neil Young, a pure coincidence, but was too overawed to speak. He was thin and wiry like Graham, and travelling separately from CS&N, in a home-on-wheels with his wife and dogs. “Each night he packs up his guitar, wife, baby son and dog and hits the road,” Crosby told me after the show.

It was a warm night and watching the show from where I stood, gazing out over a crowd of 60,000 or more, was another of my unforgettable rock experiences. At 9 pm, three-quarters of an hour after The Beach Boys, CSN&Y appeared to a standing ovation, and for the next three hours they joyously celebrated their reunion alongside Tim Drummond on bass, Russ Kunkel on drums and Joe Lala on congas. The ovation washing over them, the four principals moved to the front, Stills to the left and Young to the right, with Crosby and Nash in the centre bobbing between mikes and occasionally sharing. They opened with Stills’ ‘Love The One You’re With’.

The show was three hours long and divided into two halves with a 15-minute break. The first half, the longest, opened with an electric set and switched to acoustic, with the second half all electric, and different combinations of CSN&Y took songs in turn. Those numbers where all four played and sang together were undoubtedly the highlights.

Crosby’s ‘Wooden Ships’, with Young at the grand piano, followed ‘Love The One’, then Nash went over to the keyboard for ‘Immigration Man’, Stills taking the guitar solo. A new Neil Young song, ‘Traces’, followed with Young playing a huge Gretsch White Falcon and trading guitar breaks with Stills. Crosby stepped up next for ‘Almost Cut My Hair’, screaming out the vocals above the combined backing. For this song, Nash moved over to the organ, but again it was Stills’ guitar that carried the weight. Young’s turn came next with ‘Cowgirl In The Sand’ and the first electric set ended with all four joining together for ‘Pre-Road Downs’.

Five minutes later an assortment of acoustic guitars (about a dozen) were set up around two stools and four mikes. Firstly Young appeared alone to sing ‘Only Love Can Break Your Heart’ and ‘Old Man’, then Crosby followed with a new song called ‘For Free’, and Nash followed with two songs at the piano, ‘Simple Man’ and ‘Prison Song’. For the latter he was joined by the whole band and they stayed in place for Young’s ‘Sugar Mountain’ which inspired a mass sing-along, rightly so as we were in the foothills of the Rockies.

Stills offered ‘Change Partners’, sung by the whole band, and ‘Questions’ which he played alone. I’d have preferred ‘4 + 20’. The acoustic set closed with ‘Suite: Judy Blue Eyes’, all four tearing into this mythical song and, although some of the harmonies were occasionally a little off-pitch, they handled this long and difficult piece with the kind of assurance that comes only from those who’d created it. 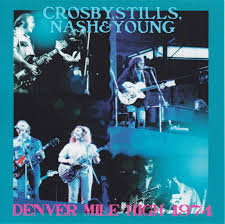 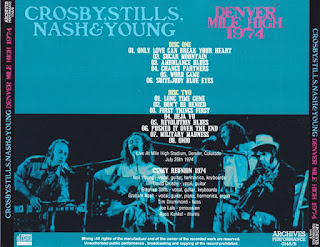 As with Clapton, I found a bootleg of the CSN&Y show on the internet.

The second half opened with Crosby’s ‘Long Time Coming’, followed by Young on ‘Don’t Be Denied’ and Stills with a new song called ‘First Things First’ on which he played congas. Crosby offered ‘Déjà Vu’ before Young played two more new songs, ‘Revolution Blues’ and ‘Pushed It Over The End’, on which both he and Stills soloed at length. The concert ended with ‘Ohio’, a great crowd favourite, another sing-along, but they returned for one encore, a lengthy version of ‘Carry On’, which proved equally popular.

The cheers were deafening but after a quick wave they left the stage fast, Young heading for his camper truck and the others to black limousines. On the way past me Stills stopped for a second. “Hey, English,” he shouted. “What da ya think?” I couldn’t think what to say so I just gave him a thumbs-up.

I lingered for a while as the crowd was leaving, taking in what I’d seen. As with Clapton, I’d found myself it a position to watch a gigantic crowd from the performer’s standpoint, seeing them react to songs, the waves of delight, the ovations, the sheer pleasure of experiencing all this on a warm night in Colorado amidst the Rocky Mountains. What a great fuckin’ job I had.

I watched the crowd disperse then knelt down next to a monitor and scribbled away in a notepad, anxious not to forget what I’d just seen. After a while I put my notepad away and spotted a blonde girl in jeans and a yellow top on her own, down at the front, gazing up at the crew clearing the stage. I shouted to her, asking if she’d enjoyed the show. “It was great,” she yelled back. “What are you doing later?” I asked. She shrugged. “Come to the party at the hotel,” I shouted and lobbed my hotel room keys down to her. She caught them and laughed so I just hoped for the best.

There was a party in the hotel, in a reception room high up on the top floor. Stills kept calling me ‘English’ and Crosby didn’t stint on the wine. I’d taken my pocket tape recorder along. Where’s Neil, I asked David. “He’s two miles out of town by now and so high on the show that nothing can touch him,” he replied. “He’s out there so happy. He came and did what he had to do for three hours and knows he did it well. Nothing can make a man happier than that.”

Crosby and Nash seemed the most enthused by the show, Nash especially. In fact, Graham seemed as high as a kite, rushing here and there and refusing to stop talking to anyone who’d listen. “It was a dramatic want to play music together again. A real need, man,” he replied when I asked point blank what motivated them to reunite. “I think we realised about a year ago that we had a really fucking hot band if we wanted and we could really make this hot music. We missed each other, y’know. We missed that bounce off. When there’s four of yer up there and there’s Stephen at one side and Neil at the other and me and David in the middle. Just watching them converse with each other. That’s it, y’know. That’s it. Like tonight, when we did ‘Sugar Mountain’, we stopped playing and heard 60,000 people sing back at us. Do you know what a rush that is?”

Of course I knew. I was about 20 feet away from him for the whole show.

I stayed at the party for a couple of hours hoping my friend with the room key would show up but she didn’t. It was the only disappointment of a fabulously memorable night.

Moving nostalgic & a reminiscent read . I was blessed to see a few shows. I became friends with Tim Drummond later when he toured with David.