SEARCHING FOR JIMMY PAGE, a novel by Christy Alexander Hallberg 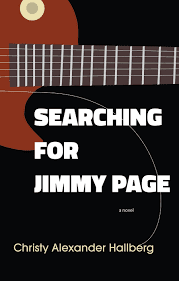 From the mid-sixties onwards, British groups touring America welcomed the attentions of free-spirited girls who hopped into their beds to ease the strain of being far from home in a foreign land. It was, I suppose, one of the perks of the job and it’s surely not unreasonable to suppose that during the early years of this touring era, when reliable birth control was not readily accessible to single women, such liaisons resulted in a few births to mothers who opted to keep the identity of the father to themselves.

This is the premise on which Christy Hallberg has created her book, a coming-of-age tale about a go-getting girl from a redneck background in North Carolina called Luna. Just before she died, gratuitously violently by her own hand, Luna’s mother Claudia gave her daughter ambiguous reason to believe that her father might be Jimmy Page, a suggestion given credence by Claudia’s fondness for Led Zeppelin’s music and a photograph of Page, all in white with raven-black curls, she hung over her bed. This happened when Luna was quite young and now, having turned 18, she resolves to embark on a quest to discover the truth behind her mother’s claim, a voyage of discovery that takes her from the far-from-idyllic American home she shares with her grandparents to London, where she seeks out the former Zep guitarist – but I’ll stop there so as not to spoil the ending for anyone who might care to read the book for themselves.

It’s very melodramatic, a rather spooky tale which, like the aura surrounding Led Zeppelin and their music, strays into areas of mysticism, tarot cards and scary things that happen at night beneath a full moon, with screeching owls and old men who stoop like the wood-gathering hermit on the cover of Led Zeppelin IV. The name Luna, of course, is a bit of a give-away.

As you would expect, the story is liberally seasoned with references to Led Zep, carefully researched biographical details, song titles for its four parts, plus a Coda, but no lyrics, of course, lest copyrights are infringed, a bit of a sensitive issue these days what with that business over the origin of the descending arpeggios that introduce ‘Stairway To Heaven’.

Set in 1988, the book follows Luna from America to the UK where the story picks up pace and becomes more engrossing. She visits Page’s homes in London, hanging around outside Tower House in Holland Park, and also Windsor, where she glimpses Page’s then pregnant wife Patricia. She even takes trips to Rushock, where she nicks whiskey bottles from John Bonham’s grave, and to Headley Grange, the former workhouse in Hampshire where much of Led Zeppelin IV was written and recorded. Now a private home, she is invited inside by its owner, ‘A distinguished-looking gentleman with sprigs of grey hair around his temples… a tall, reedy man, tidy and austere, his navy cardigan buttoned to the neck, his khaki trousers smartly pressed. “You’ve come to see the stairway, haven’t you?” he asked.’

Impressed by the detail and accurate Zep research, I felt these were the book’s strongest scenes.

‘Four Sticks’, the song about owls crying in the night, is a recurring theme, along with Luna’s aspirations to become a writer, all of which suggests an element of autobiography, it being assumed that the author is a die-hard Zep fan who in researching her book has visited the locations mentioned in her story.

It’s an intriguing scenario with intriguing characters, stylishly written. Luna’s a bit of a misfit, bullied by more conservative peers, her only friend a coloured girl called Connie, and her need to exist outside of conventional society is reflected in the Mohican hairstyle she adopts for the trip. She’s also a bit careless, which leads her into financial difficulties, but she’s rescued by a bisexual London boy who works at the hotel in which she stays and becomes her friend and guide.

Searching For Jimmy Page is not fan fiction per se – Page himself appears only briefly and doesn’t speak – and the book pays no homage to anything previously published. Instead, it uses the mythology of Led Zeppelin as the landscape for a novel about one woman’s need to discover the truth about who she is and where she came from, a not uncommon scenario in literature old and new. Not overly long, it is slightly let down by substandard production, probably for reasons of economy, but Zep fans will love it.

As a writer, rock musician and lifelong Zep fan, I found the story thoroughly engrossing!

Hi Chris - I'm currently writing an article about the cultural history of Bradford and, in part, a Led Zeppelin show at St George's Hall in January 1973. I have a question about the tour which I suspect you might be able to shed some light on! Would it please be possible to contact you by email to discuss?

Thanks so much Chris - I have just sent an email over.

Worked with Jimmy from 1980 - 1985 as his engineer and producer studio manager at the mill .
If you want to do and interview I’m here
Stuart
www.stuartepps.co.uk

Thanks Stuart! I’ve left you a message on your site.