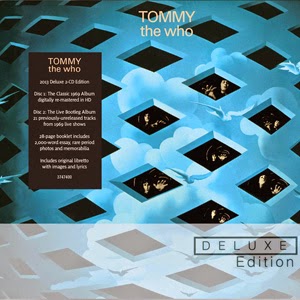 Before delivering the next generation of Charlesworths to their destinations in London today I threw into the car the upgraded 2013 Tommy package that included the live ‘bootleg’ Tommy CD, which was apparently recorded at Ottawa on October 15, 1969, a show I have referred to before in my writings about The Who as a result of having picked up a truly magic bootleg of this show at a Who fan convention in the early nineties.
So on the way back from Primrose Hill, the first offspring having been dropped off in Marylebone Road and the second delivered to where she needed to be a bit further north, I shoved the CD into the car stereo system, cranked it up and headed back through Regents Park towards Westway and all points west in the direction of home again.
It sounded terrific on the car stereo, nothing like this to liven up a boring drive. For the most part this live version of Tommy is fantastic, the usual marathon performance, all the songs segued together so closely the audience barely have time to catch their breath between them all. The customary self-depreciating introduction from Pete is followed by a stunning ‘Overture’, lovely guitar cascades leading into ‘It’s A Boy’ and everything you’d expect from The Who at their peak in 1969. The instrumental ‘Sparks’, with its layered dynamics, sudden octave drops and multiple rising crescendos, is heart-stopping, ditto a fierce ‘Pinball’, a flawless ‘Go To The Mirror’ with its ‘See Me/Listening’ preview, and Pete’s seat-of-the-pants jamming after ’Listening To You’ at the very end.
But, but, but… and I think I have complained about this before on Facebook but not on Just Backdated… for reasons unexplained, when we get to ‘I’m Free’, it’s obvious to anyone with ears, let alone any knowledge of The Who, that this and much of what follows (‘Tommy’s Holiday Camp’, ‘We’re Not Gonna Take It’ but not the coda of ’See Me Feel Me’) is from a different concert, in fact – as I realised later after a discussion with Andy Neill – Swansea in 1976.
I’d hit the A3 past Surbiton when it all suddenly went wrong, ‘I’m Free’ crashing out of the speakers and sounding so utterly and so obviously that it had been recorded at a different show as to really piss me off. In his usual warm introduction before 'Overture' Pete had explained that the show was recorded simply, with just two strategically positioned mikes, and this is what we hear until this point. The Swansea show, however, was recorded on Ronnie Lane’s 16-track mobile, so the whole sound from this point on is suddenly very different, much fuller, changed in every way in fact. Less obvious but still discernible, especially to those who know their Who, is that the group played differently in 1976 than they did in 1969. Pete is using a Les Paul guitar, which has a sharper tone than the SGs he used on the early Tommy shows, and he improvised more, probably the result of having played Tommy, or at least selections from it, countless times since 1969. Roger’s voice has deepened, improved even, and Keith is more abandoned, hitting his cymbals more than he did in 1969, perhaps to compensate for his increasing lack of discipline across the skins. Only John, eternally ill-disposed to change, sounds the same.
Strangely, the 1969 Ottawa show cuts back into the 1976 Swansea show during the intro to ‘See Me, Feel Me’ – you can hear the bad join at 1:06 – but what follows is taken not from the end of the full-length Tommy they played at Ottawa but from the reprise of Tommy excerpts within the extended ‘My Generation’ jam later in the show, as evidenced by their singing the two ‘Listening To You’ verses only once (as opposed to four times at Tanglewood, Leeds, Hull, etc, interspersed with solos), Pete’s lengthy improvisation at the end (as opposed to ending a full-length Tommy recital with the ‘We’re Not Gonna Take It’ riff, the 1969/70 norm) and the fact that Pete, Roger and Keith acknowledge the applause from the crowd at the close, thus indicating the entire concert is over. So it’s not really a complete 1969 performance of Tommy as advertised on the package after all.
Now I’m not suggesting the Tommy songs from Swansea are below par – on the contrary, like the rest from Ottawa, they’re fabulous, especially the climax to the ‘My Generation’ jam – but it irks me that so little attention has been paid to detail and continuity; not only has fans’ intelligence been underestimated but there’s an attempt – and a poor one at that – to mislead them as well. It is especially hard to swallow when the bells and whistles version of Tommy 2013 costs as much as it does and it is incorrectly packaged. When it was over, after filling up with gas at Ripley, I put on the original Tommy CD, and cranked up ‘Underture’ for the remainder of the journey home. I love this track, and it sort of restored my faith in my all time favourite rock band but I was still pissed off that this live Tommy had been unnecessarily tainted in the way it had.

It's remarkable how consistent The Who have been at releasing badly-done live albums. Everything has to be chopped up. It was nice that the 'Encore Series' helped mitigate that, but unfortunately they didn't start doing those until after The Ox passed.

Chris, I agree 100% with your editorial comments. However:

"In his usual warm introduction before 'Overture' Pete had explained that the show was recorded simply, with just two strategically positioned mikes, and this is what we hear until this point."

Pete was either joking or incorrect. It was recorded live to 2 *tracks*, which precluded any remixing after the fact, but it was definitely not just recorded with 2 *microphones*. It's possible there were 2 such mics to pick up the sound of the crowd, but the sound of the recording is definitely taken from a similar mic setup to shows like Leeds, with individual vocal mics, and mics on the amps and drums. It's just that instead of recording them all to separate tracks for mixing later, they were mixed on the fly during the show.

A show recorded with just 2 mics total wouldn't sound anything like that, with such good separation and presence.

Chris, love your blog, and your comments are spot on for the live bootleg. In response to complaints about the splice and use of the '76 material, a download was made available for Tommy's Holiday Camp and We're Not Gonna Take It w/See Me Feel Me, they were mp3 format which I added to my rip to my Fiio player, they came from a different unidentified 1969 show, so at least correct to the live boot period that was so majestic.