A WHOLE SCENE GOING ON by Barry Fantoni 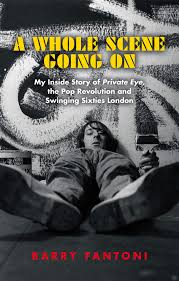 Commissioned by Melody Maker’s editor Ray Coleman to draw cartoons to accompany the exploits of Jiving K. Boots, Chris Welch’s fictitious, Catford-based rock also ran, Barry Fantoni was a regular visitor to our Fleet Street HQ when I worked there in the early seventies. He looked to me like a man in a hurry, always off to somewhere more interesting than our rather drab offices, so I never got to know him. I wish I had, though, because maybe over a beer or two he’d have been able to tell me more about the adventures he’s chronicled in A Whole Scene Going On, his memoir of the sixties to which I was alerted by a review on my former MM colleague Richard Williams’ blog The Blue Moment.
If the title doesn't ring a bell and you google AWSG and find it on YouTube you’ll discover it was the name of a BBC TV show, a short-lived rival to ITV’s Ready Steady Go!, for which Fantoni acted as co-host, alongside Wendy Varnals. Who fans will recognise Wendy as the plummy voiced interviewer who in 1966 prompted Pete Townshend to admit on TV to takings drugs and pronounce The Beatles ‘flipping lousy’, a clip now widely seen since it featured in their movie The Kids Are Alright.
With his pudding-basin hair, Fantoni looked a bit like a refugee from The Kinks or The Small Faces, certainly a man at the centre of all that was swinging in the sixties. Although co-hosting AWSG raised his profile and brought him a modicum of fame - and even a fan club - he was primarily an artist, as in painter, a regular contributor of cartoons and jokes to Private Eye and also a musician, a bit of a sixties jack-of-all trades which meant that he came into contact with everyone who was at the forefront in that renaissance decade, so his memoir is filled with captivating, mostly affectionate but occasionally dry, anecdotes about them all.
There are stories about Paul and Jane, about The Kinks and The Who, about Marianne and Dusty, about Pete’n’Dud, about David Hemmings, about the trendier footballers of the era, a few writers, designer and painters, most of whom he recalls in sketches that shed new or different light on their personalities. There’s even one about Jimmy Page whose mum Barry admired a great deal, and not just for the sandwiches she made when Barry popped around to the Page house in Epsom in the hope that Jimmy would add music to a song he’d written.
Fantoni is disarmingly frank about all those he meets which is not only refreshing but also suggests he’s telling it like it really was and not how he thinks people might prefer to remember it. Collated in a scattershot, non-chronological fashion, it’s the antidote to those awful showbiz memoirs in which everyone is wonderful, and I was much amused by his regular disparaging allusions to David Hockney, whom he believes to be less talented than some would have you believe. He doesn’t much like Jeff Beck either, but this has nothing to do with his skill on a guitar, nor Robert Fraser, the gallery owner who was jailed along with Mick and Keith after the notorious Redlands bust. He doesn’t much like the Stones as people for that matter either.
Having been a regular reader of Private Eye for as long as I can remember, Fantoni’s insights into the inner working of the UK’s foremost satirical magazine were particularly enjoyable for me. The UK’s libel laws being amongst the most punitive anywhere, PI was constantly in danger of being sued by wealthy villains and not just the magazine but those who printed and distributed it too, which meant that those at the nuts and bolts end were in as much danger as those who wrote for it. There’s a touch of David and Goliath about the way Fantoni describes the magazine’s ups and downs, and we can all be grateful to the printer in Neasden who didn’t give a monkeys about PI’s rich foes.
The well-known aphorism advocates that if you can remember the sixties you weren’t there but Fantoni disproves this, even if some of his stories seem chronologically awry. I don’t believe, for example that Ray Coleman was interviewing John Lennon for his future biography in the back of Lennon’s Rolls-Royce in the sixties, and I’m a bit confused by some of his Townshend stories, or at least when they happened. Still, this makes no real difference to what is a thoroughly entertaining and occasionally enlightening read.