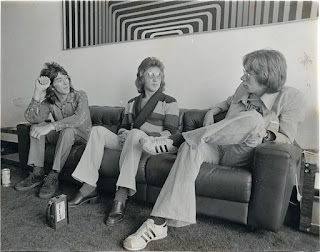 CC, talking to Mac & Kenny at their hotel.
My little cassette recorder, into which everyone spoke, is on the floor.

I saw The Faces at the Hollywood Palladium on October 18, and while the group was in town interviewed Ian McLagan and Kenney Jones at the Century Plaza Hotel where they were staying. The schism between the group and their singer Rod Stewart had yet to explode into hostility but Mercury Records, to whom Rod was signed as a solo artist, didn’t help matters by throwing a party for him – not the group, which was signed to Warner Brothers – at the posh Greek Café. The rest of the Faces were present but didn’t seem pleased that the spotlight was on Rod.
Because my new girlfriend Christine was required to stay home with her young charges that night, I took along the lovely Victoria, more as arm candy than in hope of third time lucky, and when Rod walked in wearing an all-white outfit, his tinted blonde rooster-cut shimmering beneath fairy lights, it was like he was luminescent, a sparkling jewel amidst a throng of devoted sycophants. I’d met Rod once or twice back in the UK and thought he was a bit of a cocky bugger, which I suppose he had every right to be, but I adored his first three solo LPs and loved the Faces as a group.
Victoria simply melted when I introduced her to Rod, not one of my better moves. Her eyes were like saucers and from the salivating smile on her face I thought for a moment she was going to grab hold of him and not let go. She had long blonde hair and was wearing a very short dress, just the kind of thing Rod liked, and when he smiled back at her I felt sure he was tempted to make a pass at her. Either way, I’m convinced that if he had she would have followed him anywhere that night, done absolutely anything for him, if only he’d asked. I lost her in the crowd and never asked her out again.

By this time I was getting to know my way around The City Of The Angels, driving here and there and even taking my chances on to the absurdly complex freeway system that cuts across this sprawling conurbation. I was also getting used to the idea of having someone park your car for you when you rolled up at clubs or restaurants, and one night as I left a club with Christine – I think it was The Troubador – a man in an open-topped car mistook me for the parking attendant.
“Where shall I park?” he asked me.
“Over there. It’s one buck,” I replied.
He handed me a dollar bill just as the real parking attendant emerged from behind another car. Christine and I lost no time getting into my car and as we headed for the exit too quickly for comfort the driver and attendant were both shaking their fists at me. I gave Christine the dollar bill and told her never to spend it as it would bring bad luck, and she promised not to, giggling all the way home.
I don’t think she was with me on my only other car-related incident involving, of all people, Iggy Pop whom I watched performing with his group The Stooges at the Whiskey one night in November. Mildly shocked by a show that degenerated into a free-for-all between Iggy and the audience, I wandered out into the night at the close and accidentally drove the wrong car home.
While to innocently drive the wrong car home might seem more than preposterous to most ears, the Whiskey was one of those places, quite common in LA, where when you arrived at the front door a car hop gave you a ticket and drove your car to a private car park within easy reach. When I left that night the car hop wasn’t around so I walked to the car park at the rear of the club and got into what I thought was my car – same make, same model, same colour, same rental company – found the ignition key beneath the seat and drove it home.
The following day I was due to interview Iggy and on my way to his hotel in what I thought was my red Ford Pinto I noticed my map of LA was missing, as was a carton of Marlboros I’d left in the glove compartment, and on the back seat was a pair of blue jeans that weren’t mine. I found a hotel room key in the pocket and when I got to Iggy’s motel I asked him if I could use the phone in his room. No problem, he said. I called the hotel, the Hyatt House, got put through to the room on the key fob and asked the guy who answered if he’d lost his jeans. “Yeah… and I lost my fucking car too!” It was only then that I realised what I’d done.
So, with Iggy and his girlfriend Corel in the back, I drove to this guy’s hotel and we swapped cars. Turned out he was a roadie for some band or other and he’d driven off in my car, albeit after I’d driven off in his. They were, of course, identical. Iggy just accepted this strange business as if it were commonplace.
Iggy suggested that we go to the beach to do our interview, which was a great idea as, naturally, it was a lovely sunny day. Corel was an incredibly beautiful girl with hair down past her ass, spray on faded jeans and a loose white shirt. I drove the two of them to a seaside suburb south of LA, and when we got to the beach Iggy stripped down to his underwear and swam out to sea, his wiry frame floating over the waves, dyed blonde head bobbing along the ripples, his strong arms and fluid crawl easily coping with the choppy Pacific. Soon his head was nothing more than a tiny dot in the grey-blue ocean. Corel began to look concerned. She gazed out to sea, shielding her eyes from the sun’s glare with her hand, letting her waist-length hair catch the breeze and form a billowing mane. I thought she looked like a mermaid.
“He's crazy. He always has been,” she said. “He's always after a challenge of some kind. It doesn't matter what it is, and today he’s challenging the sea. Will you swim after him if he gets into difficulty? Please!”
Fortunately for me Corel had underestimated Iggy’s swimming skills and ten minutes later he was back with us, towelling off. He’d brought a couple of golf clubs and some old balls with him and while we chatted he stopped every now and then to hit the balls into the ocean. He had a fabulous swing, and he whacked these golf balls way out into the water, looking well pleased with himself. I was amazed that Iggy, the wild man of rock, played golf which is a bit of a pedestrian sport, but he told me about his dad and how he was a sports freak and how he’d been brought up real healthy.
“You know if I had never been into music, I'd have liked to be a professional golfer,” he told me. “Some years ago I was pretty good at golf, playing off around four handicap, but I haven't played for two years now. One of my roadies took my clubs to a pawn shop because I owed him money. I think I'd have been good at anything I tried. Maybe I could even have been the president.”
Corel, sunbathing alongside us, nodded in agreement.