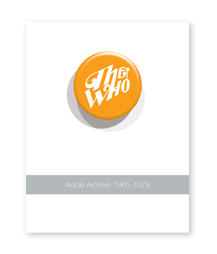 This bulky, uncredited Who scrapbook, containing 740 pages of UK and US press cuttings and photographs, first saw the light of day eight years ago but was foreign to me until very recently when my attention was drawn to it by a post on a Who-related Facebook page. Arranged in chronological order from August 1964 (reviews of The High Numbers’ single) to November 1979 (ads for the Quadrophenia movie) it is an absolute feast of delights for Who fans, especially for those who want to research the group during the Keith Moon era.
To be pedantic, the first thing in the book is the well-known picture of The High Numbers (Pete in a white jacket and shades holding a cup, the others lined up behind him) taken by Dezo Hoffman, followed by the shot of Roger’s 1964 wedding to Jackie Rickman, as seen in a few books now. Two pages later NME’s reviewer describes ‘Zoot Suit’ as a ‘medium twister with an inconsequential tune’ and is no more complimentary about ‘I’m The Face’: ‘compelling styling but weakish material’. Fortunately for our heroes Record Mirror is more enthusiastic, describing The HNs as a ‘sensational mod group’ and ‘I’m The Face’ as an ‘ultra-commercial blues-flavoured tune… by this new team who are kicking up a storm in London clubs’.
Record Mirror, in fact, seem to have been the first UK music mag to take them seriously, and in their July 11, 1964, article Pete is quoted as saying: ‘I admit to spending a fortune on bright and in-vogue clothes. I go for the West Side Story look and Ivy League gear.’ John – referred to as John Allison – tells RM’s readers that he prefers classical to any other kind of music and Keith, whose age is given as 17, says: ‘I spend all my free time listening to music in various West End of London clubs’.
It’s breathless stuff and we’ve only reached page seven of this huge book but all of this points to the fact that it’s the early Who articles that give most joy. This was an era when no group, not even The Beatles, imagined that a career in pop would last a lifetime, so The Who was no different from any other contenders in a field where they competed not only with the Fabs and Stones but with The Seekers, The Fortunes, The Rockin’ Berries, The DC5, Herman’s Hermits, The Honeycombs, Gerry & The Pacemakers and sundry others who would drop out of the race once refinement and evolution set in. In this respect the Archive reflects the topsy-turvy excitement of The Sixties when every day might bring on a new ‘pop sensation’.
There’s far too many choice entries from hundreds here to mention, but amongst them is what was probably The Who’s first coverage in Rolling Stone, a Jann Wenner interview with Pete from January 1968 that I hadn’t seen before, and their review of Who Sell Out a month later which opens with ‘This album is fantastic’. On the following page, however, RS reports that Radio WMCA (‘the number one pop station in New York’) felt differently and had banned the album, its musical director Joe Bogart branding it as ‘disgusting’ and adding, ‘I won’t even let my children see the cover’. Another humdinger is the Montreal Gazette’s report of when The Who spent eight hours in jail after trashing a hotel room in the city in December 1973.
I was more interested in the American entries than the British ones, most of which I have read in my time, but I was delighted to see the UK Fan Club newsletter from May/June 1967 with a list of honorary members that included Terence Stamp, Marianne Faithfull and Jimi Hendrix. The competition was for thinking up next month’s competition (!) and the winner was a member who opted for how many words you can make from the letters that form JOHN ENTWISTLE.
Many of the columns that Pete wrote for Melody Maker in 1970 and 1971 are included, and I was charmed to see my review of Who Came First, Pete’s first solo album, from MM dated October 14, 1972. Keith’s death doesn’t quite bring the book to a close – there are features on The Kids Are Alright and Quadrophenia movies – but there is still a sense that, like Matt Kent and Andy Neill’s superb Anyway Anyhow Anywhere chronology, the compilers of the Archive retain that sense of wonder we all share for the era when Keith was up there with Pete, Roger and John.
On the negative side, the pictures in the Archive are scanned or Xeroxed in low resolution so the quality isn’t that great, and some of the articles are hard to read for the same reason. Furthermore, a few of the magazine credits looked wrong to me and, of course, the whole thing is of questionable legality from a copyright point of view. Nevertheless, whoever compiled it makes the point that it has been produced on a not-for-profit basis and is for academic use, so these issues are largely irrelevant. At £12.90 it’s still a genuine bargain and it can be obtained here:
http://www.lulu.com/shop/the-who/article-archive-1964-1979/paperback/product-21130026.html