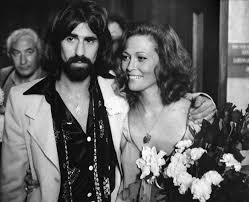 In the first week of November I interviewed Peter Wolf, the singer with the J. Geils Band, in his suite at the Continental Hyatt House, or the Riot House as it was renamed after Led Zeppelin trashed it. Wolf’s girlfriend, the actress Faye Dunaway, sat in on the interview and, when it was over, asked me about England, about the royals, about our customs and why our policemen didn’t carry guns. She was quite tiny, birdlike almost, and very beautiful, and she spoke to me in a word-perfect English accent. Maybe she was practising for a part.
That night the JGB played at Long Beach Arena, supported by my friends Slade who were largely ignored by a partisan crowd. After having watched the vastly experienced Slade blow away everything in their path in the UK, it was galling to see them being snubbed in LA. I’d have thought that the Geils’ crowd, obviously fans of the raucous R&B their band played, would have enjoyed Slade if only they’d given them the time of day. I could understand an antipathy towards Slade if they’d been on a bill with, say, the Eagles, but J. Geils and Slade were a decent match. Perhaps Noddy’s garish outfit put them off, or maybe it was his OTT stagemanship which, in hindsight, wasn’t a million miles away from four New York chancers who hit the jackpot by painting their faces to resemble cartoon-book villains, or even a Telecaster-wielding ball of energy soon to emerge from an apprenticeship on the New Jersey shore and become the future of rock and roll. It can’t have been Noddy’s voice, which was a match for anyone anywhere.
I watched their show from the side of the stage and remained there for the JGB’s set, and after about half an hour Faye, in a pale blue silky dress, turned up, made eye contact and stood next to me until it was over. It’s always too loud to make conversation at the side of stages so we didn’t talk much but I gathered from her that she’d be at the after-show party, as would I. “See you there,” she said as she dashed off just before the final number was over. An experienced celebrity, she knew precisely when to leave.
The party was aboard the Queen Mary liner, now permanently docked nearby after renovation as a posh hotel, and when I made my way into the room where it was being held I noticed that Faye was sitting on her own. Peter Wolf had evidently not yet arrived or had left her alone to have his picture taken, and she beckoned to me to join her. We continued our ‘English’ conversation for a few minutes then, to my surprise, she suggested we take a stroll along the deck together. As we did so we fell into an improvised dialogue, imagining ourselves as English aristocrats crossing the Atlantic at the turn of the century, perhaps even on the Titanic. It was another of those lovely warm LA evenings and as we ambled along together we warmed to our roles, linking arms flirtatiously beneath the stars. The conversation, inspired on my part by Jeeves & Wooster, went something like this:
“Tell me Lord Charles, how was the conversation at the Captain’s table tonight?”
“It was very agreeable, Lady Faye. The Countess of Avignon joined us and was most amusing. I see you dined with the Duke of Marlborough this evening. How are the Duke and Duchess? I often shoot at his estate in the Highlands, you know.”
“The Duke is very well but the Duchess has a touch of mal de mer.”
“Oh, how tiresome. I do hope she’s well enough for the deck quoits tournament tomorrow. She’s a spiffing player you know.”
“Spiffing?”
I had here there but it was a hoot. I was thoroughly enjoying this, and I think she was too. We came to a step-ladder that took us to a higher level and I followed Faye’s pert little bottom up into a sort of observation deck area where we continued our adlibbing. The truth is we were flirting with each other, all very tongue-in-cheek of course. The thought of taking Faye Dunaway into my arms for a bit of a snog was simply too outrageous to contemplate for me. Then we heard Peter Wolf shouting from below. He’d evidently been alerted to the scandalous reality that his famous girlfriend was out on the deck with another man, and he sounded peeved, probably thinking something was going on between us. As if.
Faye smiled at me and squeezed my hand. “Thank you, my English friend,” she whispered, pecking me on the cheek, “but I have to go.”
She excused herself and went back down to soothe her irate boyfriend. Musing on this fairy-tale encounter I lingered a while, smoking a cigarette, looking up at the stars and staring out over the dark blue Pacific, and when I finally made it back to the party both had left.
Faye Dunaway married Peter Wolf the following year but they were divorced in 1979. I never met either of them again. 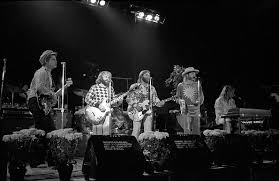 The Beach Boys at Anaheim, November 1973

On November 16, I drove down to Anaheim with Christine to watch The Beach Boys in concert at the 8,000-seater Convention Centre. This was a really big deal for me, not just because I’d planned a weekend of it for myself and Christine, the only girl I’d met in LA that I really liked, but because I’d loved The Beach Boys for years, and she was a fan too. I’d seen them in London a couple of times but now I was going to see them in their own backyard, in Orange County in Southern California, which was like seeing The Beatles in Liverpool or The Who in Shepherd’s Bush.
I dressed the part, white jeans, tight t-shirt, trainers; Caroline too, and she was blond with an hour-glass figure which helped, though neither of us were sufficiently tanned to be the real deal. In the car park were woodies with surf boards on roof racks, so the locals took it as seriously as we did.
It was a fabulous concert, just a great big fun-filled rock’n’roll party, with the group swept along by an arena-sized sell-out crowd that danced in the aisles and sang every word to every song they played, hit after hit after hit. No doubt out of respect for its mellower tempo and gorgeous harmonies, the only time they quietened down was when the group performed ‘Surfer Girl’, superbly too.
If there was a clear favourite among all the hits they played, the odds were on the unofficial state anthem. Indeed, there’s nothing closer to Beach Boys heaven than hearing real California girls, like thousands of California girls, singing along to the glorious tribute that Brian Wilson wrote for them: countdown… ‘I couldn’t wait to get back in the state’, ignition… ‘back to the cutest girls in the world’, lift-off... ‘I wish they all could be…’, and the whole sodding place simply exploded into song. Magic. Christine thought so too.
We stayed at the nearby Disneyland Hotel that night and on the TV in our room watched David Bowie’s 1980 Floor Show, filmed at the Marquee in London and featuring Marianne Faithful as a nun in a backless dress sans culottes. We spent most of the next day at Disneyland, going on all the rides. We might even have gone on Pirates Of The Caribbean twice.
I wasn’t to know it but this romantic weekend, this ultimate five-star Golden State of California experience I’d gladly given Christine, was the culmination to our time as lovers. That night, after we’d driven back to LA, she asked me to park on the street where she lived and turn off the car’s ignition. Then, hesitating slightly to deflect the impact, she told me her errant boyfriend, the bloke who’d left her in the lurch and hitchhiked down to Mexico, was returning and she had decided to forgive him. He was, after all, her childhood sweetheart, the only other bloke with whom she’d ever stepped out. I guess she had known about this all weekend but hadn’t had the heart to tell me earlier. So, as nicely as she could in light of the fabulous few weeks we’d enjoyed together, Christine dumped me.
C’est la vie.